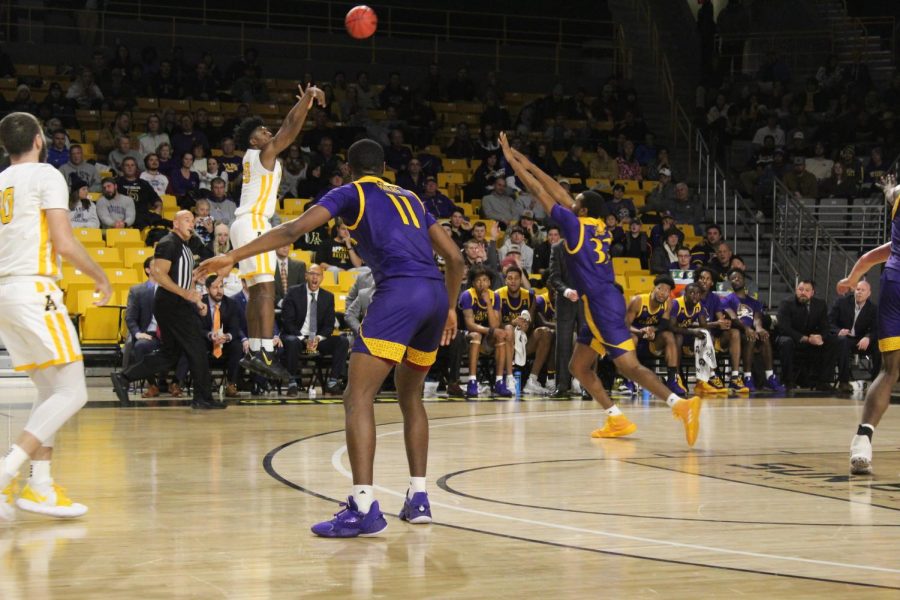 Sophomore guard Adrian Delph knocks down a three pointer in the first half of App State's 68-62 win over East Carolina on Nov. 13. Delph set new career-highs with 19 points and nine rebounds in the game.

The Mountaineers men’s basketball team improved to 2-1 on the year with a 68-62 victory over the Pirates of East Carolina on a snowy Tuesday night in front of a large crowd.

“I’d like to just thank our students and fans (for) coming out on a weather night that wasn’t maybe ideal, and I thought that they really helped us,” first-year head coach Dustin Kerns said. “I thought they brought a lot of great energy, and so we appreciate that and hopefully we’ll continue.”

Junior guard Justin Forrest led the way for App State with 22 points. Forrest attacked the rim and had success forcing the Pirates to send him to the free throw line, where he hit 10-of-11 shots.

“It feels good, we had a great crowd tonight,” Forrest said. “We lost to them last year but it feels good to get revenge this year.”

“I gotta give all the credit to my teammates,” Delph said. “They found me open whenever I got hot, so I can’t take (any) of the credit for that.”

Redshirt junior guard Michael Bibby knocked down a corner triple with 30 seconds left in the half to give the Mountaineers a four-point 31-27 cushion going into halftime.

The second half was tightly contested. There were 13 lead changes and six ties from the start of the second half to the 7:03 mark, when senior forward Isaac Johnson made a layup that would put the Mountaineers up for good. Johnson’s layup made the score 52-50 in favor of the home team.

App State held the Pirates to 21-for-59 (35.6%) on field goals and forced 14 turnovers in the game. The Mountaineers outscored ECU 14-6 on points off of turnovers and 18-6 on fastbreak points.

Kerns said he was proud  of his team’s defensive performance against one of the tallest teams in the country. The Pirates roster features three 7-footers for the first time in program history and their average height is 6’7”.

“We’ve been really emphasizing defense around here,” Kerns said. “We let our defense dictate our offense there to start the game and we made some winning plays at the end of the game that I’m certainly very proud of.”

Next up for the Mountaineers is a trip to Greensboro for the Spartan Invitational. They will face Montana State on Friday, Nov. 15 at 4:30 p.m. before taking on Tennessee Tech on Saturday, Nov. 16 at 3:30 p.m. Then, App State will play host school UNC-Greensboro on Monday, Nov. 18 at 7 p.m. All games will be played in the Greensboro Coliseum.

“We just take (it) day-by-day,” Forrest said. “We’re not looking forward, we’re not looking backwards. We’ll enjoy this win tonight, get back in the lab tomorrow (and) focus on our next opponent.”