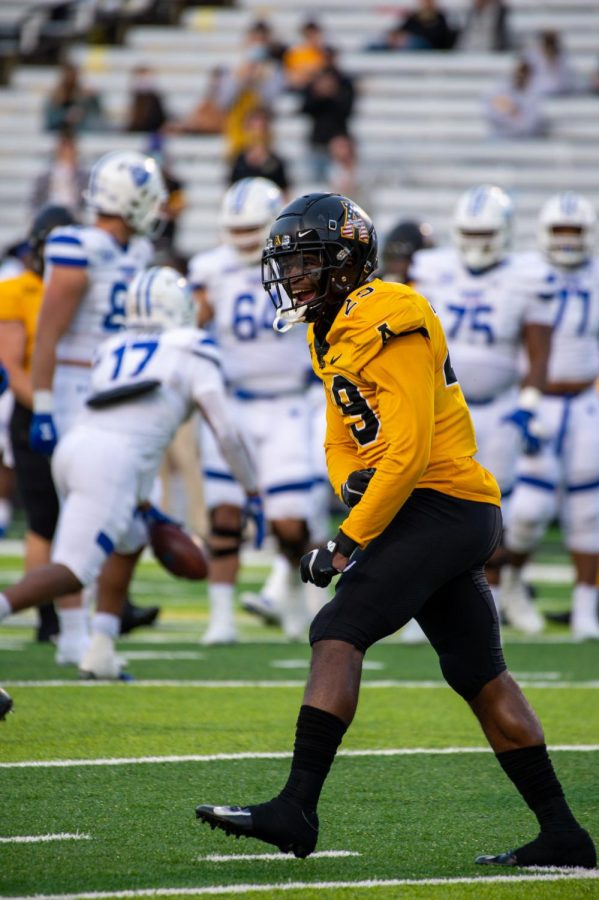 Linebacker Brendan Harrington flexes after coming up with a stop against Georgia State in his sophomore season. The junior posted four total tackles including 1.5 tackles for loss in the 2021 season opener vs ECU.

The history of App State football has been filled with outstanding defensive talent. Every year, there’s a highlight-reel defender that plays all over the field, making plays in the passing and rushing game.

Brendan Harrington, a junior linebacker, if limited to one position,  has taken over the role as swiss-army knife for the Mountaineers. Lining up everywhere on the field and taking over any role necessary, Harrington has taken the mantle of “do-it-all” defender, a title once held by current Cincinnati Bengal Akeem Davis-Gaither.

Harrington was considered a safety his freshman year at just 6 foot 1 inch tall and 205 pounds. Rarely seeing playing time, the Northwood High product made his presence felt on the special teams as a gunner on punt returns, where he saw most of his snaps.

“I just come in, play my role, and do my job to help the other 10 guys on the field. I just make the plays when they come to me. That’s really it,” Harrington said.

Making plays has become normal for Harrington after spending time in Boone. After one year using the App State physical regimen and weight room, Harrington added over 20 pounds and entered a hybrid role as both a safety and linebacker.

With the combination of size and speed, he carved out a spot in the middle of the defense during the 2020 season. Harrington finished his sophomore campaign with 48 total tackles to go along with four interceptions, one being a pick-six in a 38-17 victory over Texas State. Harrington has reaped the rewards of his versatility and is expected to do the same in 2021.

“Any time you got a linebacker that can match a receiver, tight end, and basically take them to the house with nobody helping them is a big plus because you’re helping everywhere else,” App State defensive coordinator Dale Jones said.

Harrington isn’t the only fast linebacker on App State’s defense. Seniors Trey Cobb and D’Marco Jackson have versatility at the position Harrington has modeled his game after. In practice, they match up against multiple All-Sun Belt receivers in super seniors Corey Sutton and Thomas Hennigan. Harrington takes on the challenge as a chance to learn and improve.

“We never see this many good receivers as we do in practice. We’re three deep at receivers, and when I say three-deep, I mean all three sets of receivers can start,” Harrington said. “It’s always good to be able to go against them. It just makes it easy for the game. The speed that they play with, the preciseness of the routes they run, it just makes it so much easier.”

Harrington’s ascent into a playmaking role on the Mountaineer defense has been because of his growth physically and in the film room. Multiple coaches said Harrington spends some of the most time in the film room perfecting his game and learning from mistakes.

As Harrington has sharpened his skillset, the size he’s added will allow him to play a multitude of positions. Coming into 2021, he’s spent time at all linebacker spots, safety and defensive end.

“I’ve been trying to work on my physicality a bit more at the point of attack, whether it’s shedding blockers or making tackles … I’ve really tried to work on everything getting ready for the season,” Harrington said.

Over the last year, Harrington has worked on all aspects of the game with physicality being the main focus. The bittersweet end in 2020, after not making the Sun Belt Championship, gave Harrington fuel to prepare for this season, and it’s almost time for the work to pay off.

After a season that was considered a disappointment in the App State locker room, the revenge tour starts soon in a big season opener at Bank of America Stadium. For Harrington, a North Carolina native who grew up watching the Carolina Panthers, this is a big moment. Having spent a season without a stadium full of fans, he’s excited to get back in front of the Mountaineer faithful for his junior campaign.

“ECU is a good opponent, so we look forward to that. I’m ready to see all of our fans there and have it rocking and put on a good show for our fans,” Harrington said.