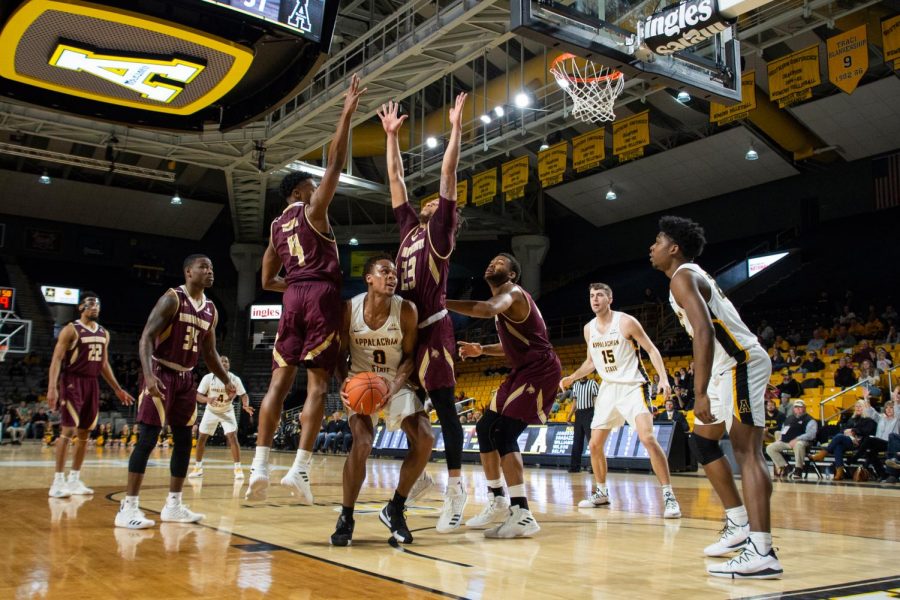 Senior forward Isaac Johnson fights through traffic under the basket at home against Texas State on Jan. 12.

The Mountaineers displayed their ability to produce a balanced attack as five Mountaineers scored in double figures, and two nearly came away with double-double’s.

“I’m working on every part of my game to be the best to get the team win,” Johnson said.

Freshman Donovan Gregory added 10 points and eight rebounds off the bench. The freshman logged more than 17 minutes of game time, 11 more than the season opener at Michigan.

“I think experience is the best teacher,” Kerns said. “It was important tonight to hopefully get Donovan a lot more minutes.”

App State controlled the game from the opening tip and never allowed Ferrum to take a lead. The Mountaineers forced the Panthers to 38 three-point shot attempts, and only hit eight of them. The Panthers only shot 10 free throws to App’s 42.

“They were a team that could really shoot the ball, but we certainly affected their shots,” Kerns said.

The Mountaineers’ next game is on Nov. 12 at 7 p.m. in the Holmes Convocation Center where they will look to avenge last year’s heartbreaking two-point defeat to East Carolina.

“It’s a new year, we’re a whole different team,” Williams said. “It starts with defense for us, and everything else will fall in place.”