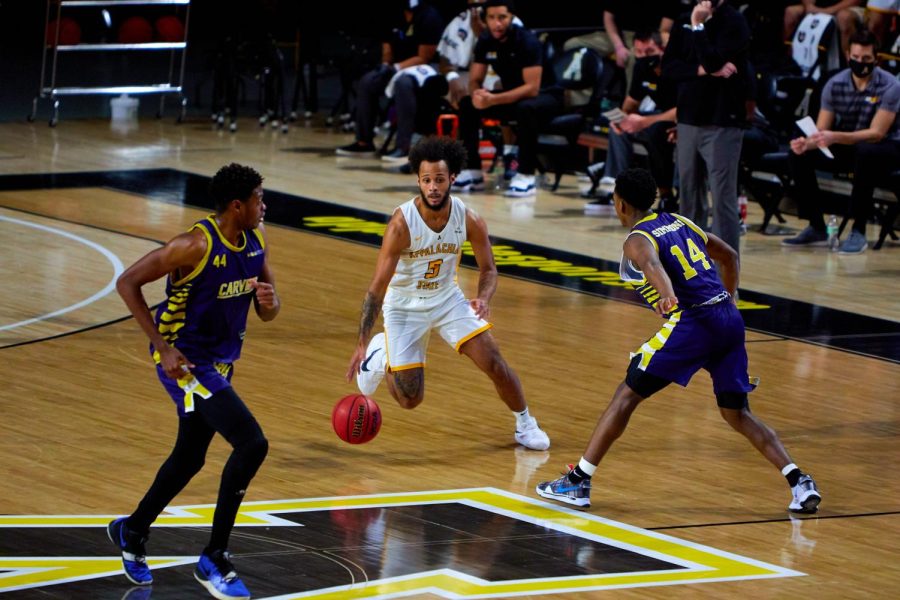 Graduate student guard Michael Almonacy returns to App State for his second season as a Mountaineer. Almonacy is the reigning Sun Belt Tournament Most Outstanding Player.

App State men’s basketball ended its 2020-21 season with a victory in the Sun Belt Tournament Championship and a trip to the NCAA Tournament for the first time since 2000.

Despite losing six of their last seven regular season games, they ended the regular season with a 17-12 record, enough for the seventh seed in the conference tournament. This was partially due to a stellar defensive system. The Mountaineers were second in the Sun Belt in opponent points per game at 64.1, and they held their opponents to a three-point percentage of 32.5%. This defense, paired with an effective offense, is what propelled App State to win four-straight games in the conference tournament and a victory over No. 1 seed Georgia State in the championship game.

According to head coach Dustin Kerns, the Mountaineers hope to keep their momentum from last season. There are 10 players returning for the Mountaineers. One is senior guard Justin Forrest, who averaged a team-high of 13.2 points per game last season in just 28.8 minutes per game. He is only 357 points away from breaking the App State record for career points.

“The coaches and this team were the main key to me even thinking about coming back because I just love it up here,” Forrest said. “I just wanted to be able to play on this team again and just be around them for another year.”

Another veteran who will play a major role on the team this season is graduate student guard Michael Almonacy, who averaged 12.7 points, 2.9 assists and 4.3 rebounds per game last season.

“I think everybody worked really hard, and our young guys got way better. Being a year into this system really helps,” Almonacy said. “Every day in practice, we are just competing and as we see, their jump has been tremendous this year.”

In addition to most players returning for another year, App State has picked up several high school recruits, including Terence Harcum, a playmaking guard who can score at will. Harcum finished his high school career with 2,418 points, ranking 13th in North Carolina history.

These additions give App State a boost in scoring at all three levels, as well as an increase in overall athleticism. The addition of Mantis, a lengthy forward who disrupts passing lanes and can overwhelm shooters, specifically helps the Black and Gold defense, which is already one of the best in the conference.

Although the Mountaineers are the reigning conference champions, the team has worked hard this offseason in order to hit the ground running, and it has been important for them to have a humble approach entering this season.

“Good teams come to the gym every day and work hard to get better,” head coach Dustin Kerns said. “That’s been our focus with this team because there are expectations now, and this is a new team with a new approach.”

Coming off of a conference championship victory, expectations are high for the Mountaineers this year. These high standards have resulted in a competitive schedule as well as several more televised games this season compared to last season.

App State will participate in the Gulf Coast Showcase, a mid-season tournament where they will play the Delaware Fightin’ Blue Hens Nov. 22 and will play either Akron or Fordham just a day later. They will end the tournament Nov. 24 with a match-up against one of four teams depending on the outcome of previous games. Those four opponents are Rice, Vermont, Oakland and Evansville.

The non-conference slate for the Mountaineers is especially challenging, with one notable game being a mid-December match-up at Duke Dec. 16. This game will be one of the last games that legendary head coach Mike Krzyzewski will ever coach, given that he is retiring after this season. Another important non-conference match-up is the game against the North Carolina Tar Heels Dec. 21. Both of these games will be nationally televised.

The Mountaineers will play their last home game of the season against South Alabama Feb. 19 before a two-game road trip with match-ups against Little Rock and Arkansas State. They will then have just five days to prepare for the Sun Belt Conference Tournament, which will begin March 3.

The Mountaineers will start their season with a matchup in New York against Iona Nov. 9