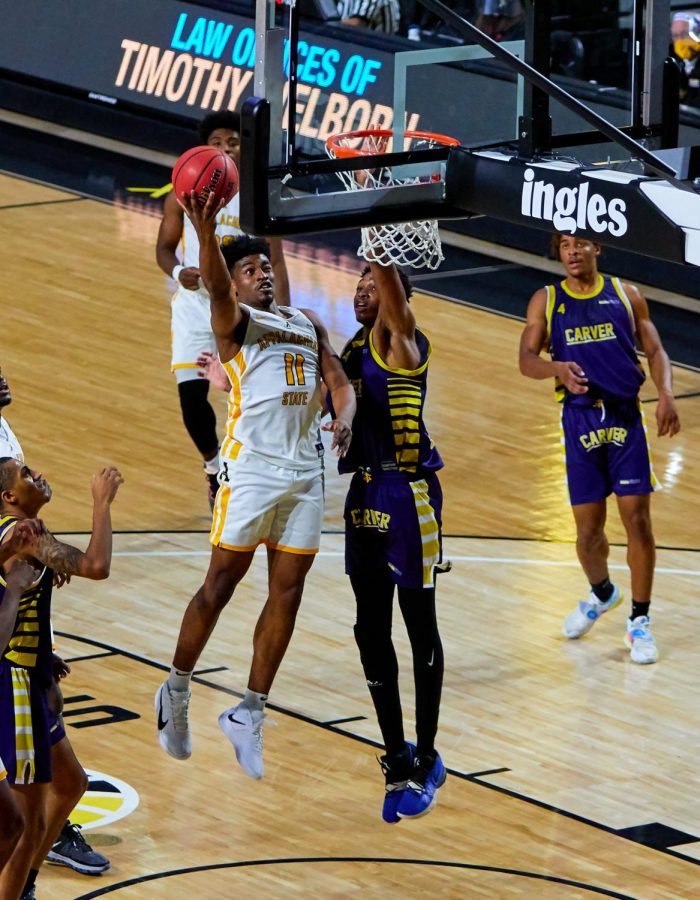 App State sophomore wing Donovan Gregory goes up for a layup against Carver Nov. 27. Gregory had a career-high 18 points in the Mountaineer victory over Greensboro College Thursday.

App State men’s basketball won games on Thursday and Friday evening, beating Greensboro College 87-47 on Thursday and knocking off Columbia International 77-41 on Friday. The 6-2 start to the season is the best start the Mountaineers have had in 30 years, when the 1989-90 squad also started 6-2.

In order to avoid as much cancellation and postponement as possible, the Sun Belt implemented a back-to-back two-game series scheduling system with each opponent in league play this season. For example, App State opens conference play vs Troy Jan. 1 and 2 with games at 6 p.m. Friday and 4 p.m. Saturday.

The rest of the Mountaineers’ conference schedule consists of eight similarly-scheduled weekend series. In normal years as well as most of the non-conference schedule, there are no back-to-back game days and teams have more recovery and practice time between games.

“It’s interesting, it’s not something that we do often, and now we’re going to have to do it a lot,” App State head coach Dustin Kerns said postgame Friday. “We really went through a trial run today with our preparation.”

Kerns said it was important for the team to play two similar back-to-back games in the non-conference schedule to help prepare for what it’ll be like during Sun Belt play.

“Really, it just comes down to being mentally tough, and that’s what the coaches are telling us, so that’s just what it’s going to take,” sophomore guard/forward Donovan Gregory said. “We have to do it. It’s been an awkward year, so it’s just something we’ll get used to, but I think we’ll be good.”

On Thursday, Gregory led the Mountaineers past the Pride of D-III Greensboro College with a career-high 18 points on an efficient 5 of 6 from the floor and 8 of 9 from the foul line.

App State took an early 11-5 lead and never looked back. The Mountaineers closed the first half on a 12-2 run and took a 46-25 lead into halftime. In the second half, App State continued to distance itself from the Pride, leading by as many as 44 en route to the 87-47 victory.

App State junior point guard Deshon Parker made his Mountaineer debut against the Pride, finishing with 10 points, five rebounds and a steal. The James Madison transfer started all 30 games last year for the Dukes, averaging 10.1 points per game and finishing the year with a team-high 120 assists.

The NCAA initially denied Parker’s waiver to play this season, but on Wednesday, it voted to pass blanket eligibility for all transfers this season.

“We’re (in) late December, and it’s hard to just all of a sudden pick up and just find out you’re playing, and play,” Kerns said. “Even though he’s practiced, it’s different.”

“I don’t want to sound disappointed with a 36-point win, but we’re still figuring things out, especially now that we’re adding Deshon Parker to the mix,” Kerns said. “Getting in a rhythm, getting in a flow offensively is going to be critical for us coming up.”

All five Mountaineer starters scored at least eight points, and App State again dominated for the majority of the contest.

App State scored the first nine points in the second half, effectively snuffing out any comeback hopes the Rams had left. The Mountaineers’ balanced attack helped them coast to an eventual 77-41 victory.

“After yesterday’s game, (Kerns) emphasized taking care of our bodies, stretching and doing whatever we needed to do to prepare for this game,” Lewis said. “It definitely worked, because we felt new and we came out strong.”

Kerns talked about how having a deep roster leads to positive competition and stressed that every spot in the game is earned, not given. He mentioned how the team has used multiple different starting lineups because of that.

“I’ve talked to our guys about (how) every day is an interview,” Kerns said. “I thought RJ Duhart played really well last night, and so I gave him the nod with his first start. I want our team to have that type of mentality, where they show up and they play well, you’re going to get rewarded. You don’t show up, you don’t play well, you’re not.”

After a busy stretch of three games in four days, Kerns said it will be important for the team to get some good practice and rest in before traveling to play the final non-conference game of the year at Auburn Dec. 22. Tipoff is set for 2 p.m. and is set to air on SEC Network+.