App State men’s tennis looks to bounce back in 2020 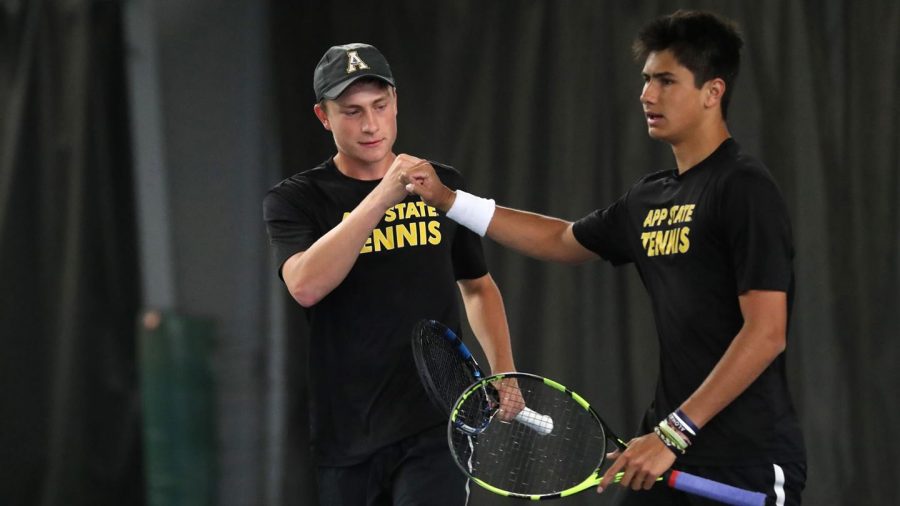 Former App State men’s tennis players Milo Bargeron (left) and Zion Heaven (right) fist bump during a match. The App State men's tennis program, along with men's soccer and men's indoor track and field, were discontinued because of budget cuts due to the pandemic.

After a 5-20 2019 spring season, the App State’s men’s tennis team is looking to turn things around in 2020. Second-year head coach Craig Schwartz hopes to use momentum from the Mountaineers’ fall season to carry them into the spring.

“For us, I think it actually went pretty well,” Schwartz said. “We got a lot of good matches in, and all the guys got to play, and based off of last fall to this fall, it was well improved, so we’re happy going into the spring.”

Schwartz said that the 2019 season, his first at the helm, was about changing the team’s culture. This year he believes a competitive culture is now set in place.

“If people come and watch, they’re going to look at our team and know that we’re going to battle till the last ball, and that’s something that I tried to bring to the culture of the team and just having that blue-collar mentality,” Schwartz said.

The Mountaineers bring back three experienced senior leaders in Milo Bargeron, Alex Pavkovich and Campbell Stone, but also bring in a five-man recruiting class. This combination of experience and fresh faces could be the key to the team’s success.

“I think just bringing energy and attitude is a big thing,” Stone said. “When you’re out there as a team, just having that energy can make someone come back in a match or pull out a match, so I always think that’s a big deal with young guys coming in and playing their first college matches.”

Out of the recruiting class, junior transfer Aleksandar Petrovic will play the biggest role for the team this season. Petrovic had a 27-11 singles record at his previous school, Samford University, and will likely play in the No. 1 spot for the Mountaineers this season.

Sophomore Zion Heaven will also be a key contributor after an impressive freshman season in 2019. Heaven finished second on the team last season in singles wins with six, five of which were in won in straight sets.

“I think one of the main things I’ve learned is just how different college tennis is compared to junior tennis and just figuring out how to work as a team, you really have to get that family dynamic going and just support each other through everything,” Heaven said.

The team’s current record is 1-2 and their next match is Feb. 8 at Virginia Tech, followed by a home match versus Tennessee Tech Feb. 9.