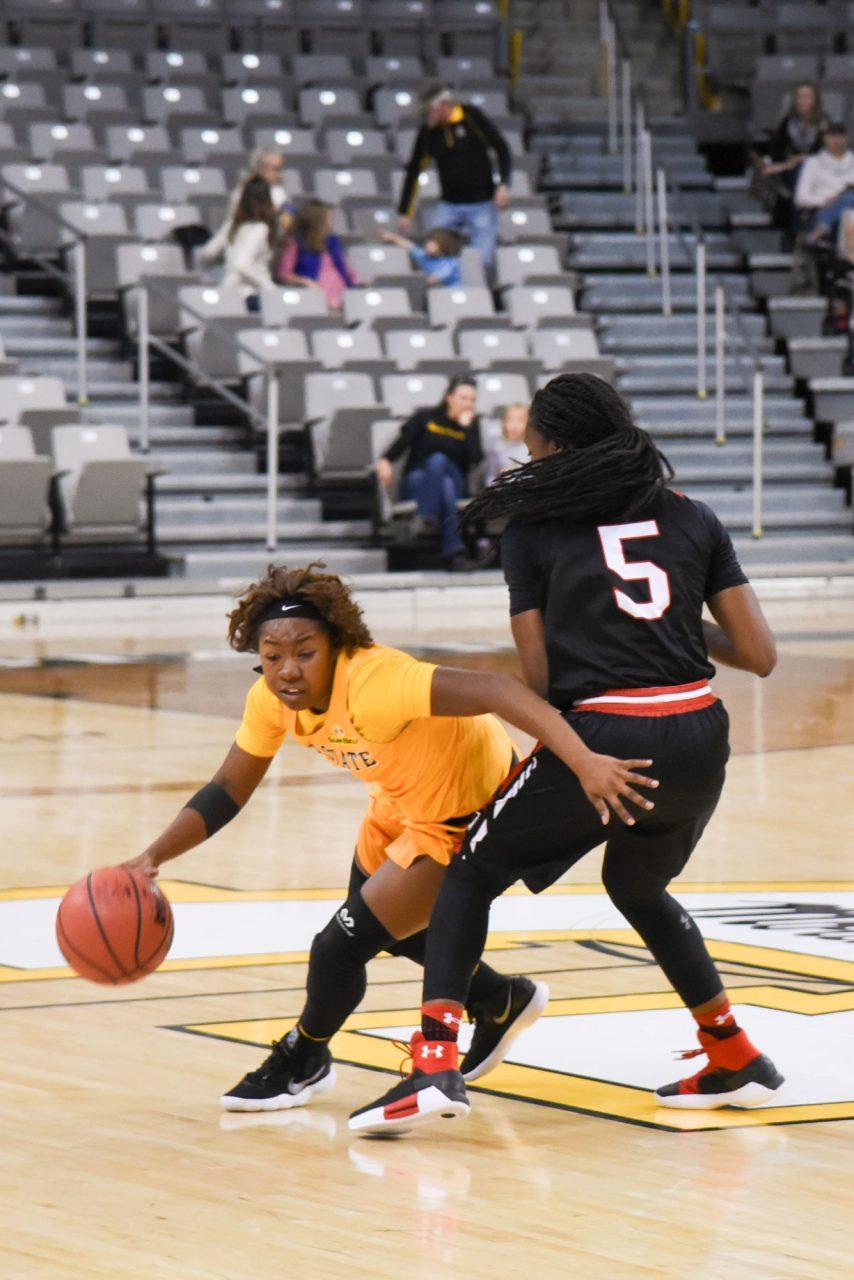 Freshman guard Tierra Wilson makes her way around an opposing Davidson player towards the basket.

Mountaineer freshman Tierra Wilson started out the scoring early, nailing a 3-pointer off the assist from Bayley Plummer just 12 seconds into the game. Georgia Southern tied the game 5-5 before Plummer grabbed one of her 10 rebounds and made a layup, giving App State the lead again. They never gave it up.

App State dominated for most of the ball game, out-rebounding the Eagles by 30 and shooting 55.4 percent from the floor to Georgia Southern’s 28.4 percent. Wilson held the spotlight in the first half, shooting a perfect 7-7 from the field, including 5-5 from 3-point range. Wilson finished with 21 points, leading both teams, and also had two rebounds. Plummer picked up her eighth double-double on the season with 11 points and 10 boards.

“As a coaching staff, it’s almost like pick your poison,” head coach Angel Elderkin said. “Because people want to double Bayley, but some of our best offense now is doubling Bayley and kicking out to our shooters on the outside.”

One of App State’s keys on the day was stellar teamwork. They tied their season-high 21 assists and made a number of well communicated plays that will not show up on a stat sheet.

“I just left the locker room with alumni that were brought to tears over the way that our team played as a team,” Coach Elderkin said. “[They were] proud of how we are, how we hustle, how we communicate. I think that was the most powerful thing that could be said to our team.”

All nine active members of the Mountaineers’ roster played double-digit minutes, with seven of them making at least one assist. App State also had a great day on defense, blocking three shots, grabbing six steals and holding the Eagles to just 22.9 percent from 3-point range.

“I think the coaches really set a strong foundation for us to live up to, and I think we’ve all bought into this,” freshman forward Lainey Gosnell said. “We’re all working together, even though we don’t have that one solid leader. We’re all on the same page.”

While the Mountaineers displayed great team chemistry, they have not been together long. Their oldest player to take the court on the afternoon was junior guard Anna Perez-Gomez, who is in her first year at App State and played the smallest number of minutes. For the Mountaineers to have success this season, it will be a story of freshmen and sophomores.

“Losing a senior in the beginning was kind of tough. There wasn’t a person to really step up with talking, with communicating,” freshman guard LaPresha Stanley said. “But I think throughout practice we learned that someone has to step up, someone has to be that leader, to communicate, so we’re able to come together.”

App State will return to action on Jan. 18 with a road game against the Troy Trojans.