App State police has a new officer sniffing around campus 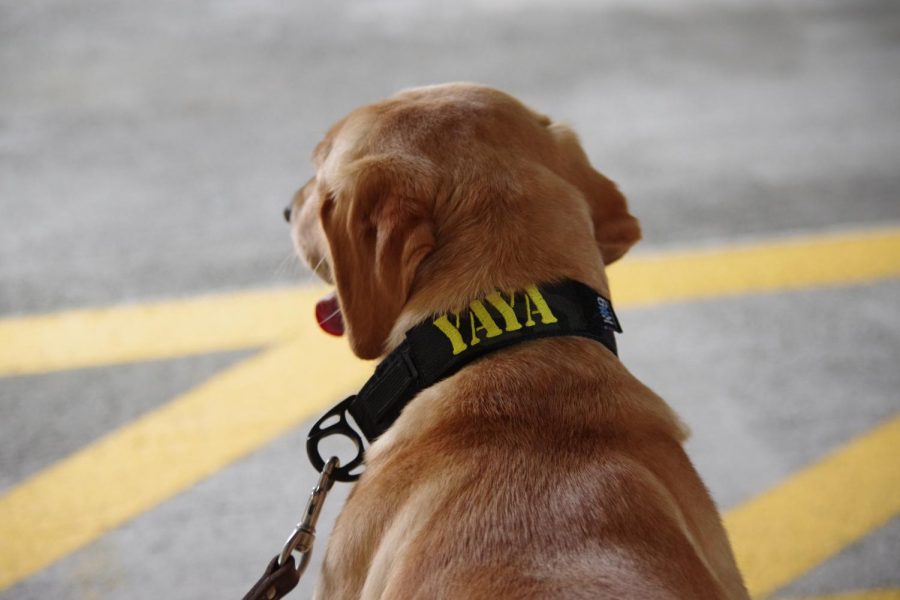 Yaya is trained in explosive detection and tracking, which Andy Stephenson, App State chief of police, said increases the department’s capabilities of providing a safe campus, especially when it comes to large events.

“Explosive detection canine sweeps are standard procedures for large events on our campus, and we were paying for these services in the past with no guarantee that other agencies would be available to assist us,” Stephenson said. “Having our own team’s ensures that these services are always available to us.”

“She’s a really friendly dog,” Wilson said. “She’s what they call a floppy-eared dog. So, she doesn’t know how to bite people or anything like that.”

Yaya completed 680 hours of training at K2, which included learning about imprinting. During the training process, trainers hide a toy somewhere for the dog to find. After the dog finds the toy, the trainers then rehide the toy on an explosive.

“When the dog gets their toy, they’re like, ‘I smelled something on there,’ and then a little later, they remove the toy, and when the dog smells the explosive, they kind of stop,” Wilson said.

When the dog stops, the trainer throws the toy to the dog so the dog starts to associate the smell of explosives with toys.

Wilson keeps imprinting in Yaya’s mind by standing behind her after she alerts him to an odor. He then throws a toy up over her head so it looks like the toy came out of nowhere for her.

Even when Wilson cannot see Yaya, he can tell if she alerted him to an odor. When she alerts, Yaya will sit down near the odor.

“That’s when she’s right at the source of the odor. She actually stops breathing for just a little bit,” Wilson said. “And you can hear her take that breath, and then she’ll sit down.”

Wilson said Yaya is trained to focus on the explosive until the toy flies out of the air.

Yaya is also trained in tracking people and recovery. When she trained for tracking, the person at the end would give her a toy and praise her.

“She assumes if she finds somebody, it’s going to be a party,” Wilson said. “She’s no threat to that person, even if it’s somebody scared of dogs. The worst she’s going to do is lick somebody.”

She is trained to track with a combination of scent and disturbed vegetation.

“So, the nice thing about that is if, say, an elderly person had gone missing from a rest home or a small child, when they go out, we can give (Yaya) that scent article, and then she can focus on that first as opposed to whatever’s crushed in that area,” Wilson said.

She is also certified in firearm and shell casing recovery.

Wilson said he wants to let other agencies in the area know what she is capable of so they can help out if need be. Stephenson said if Yaya is requested, App State Police would assist other agencies.

When she isn’t on the job, Yaya lives at home with Wilson and his family as well as their two other dogs. Because she was joining a family, Wilson’s wife helped pick out Yaya at  K2 Solutions.

“Chief Stephenson invited my wife to come with us because he said, ‘You know what, this is going to be part of your family. So, we need to make the decision that’s going to work best for your family,’” Wilson said.

The group originally saw four dogs that Wilson said were all great, but Yaya was the fastest to pick up on all the odors. Wilson said another aspect really sold Yaya to the group.

Wilson said he will train with Yaya on a regular basis on campus. On a recent training occasion, Wilson said they were near a group of girls taking graduation pictures.

“I heard them say, ‘Shit, that’s a drug dog,’ and they just took off,” Wilson said. “My goal was to let them pet her so she can get used to people. Unless you have a bomb in your car, you’re perfectly safe. Drugs she could care less about.”

Both Stephenson and Wilson said they want students to interact with her on campus. When she is working, she will wear a vest that says do not pet.

“She’s actually completely focused driven. So, if somebody tries to pet her, she’ll just walk around you on purpose as long as she’s working,” Wilson said.

When Wilson switches to her “home collar,” Yaya knows people are allowed to pet her. She will also have a harness that says “working dog, ask to pet.”

“We’re excited to have Officer Yaya join our team and become a member of our amazing campus community,” Stephenson said. “She is very sweet and very friendly. We hope that those on campus will stop to say ‘hi’ when they see her.”

He also said if there is interest, the department is willing to showcase Yaya’s skills for groups on campus.

Wilson said they could not have placed a better dog with him, and he couldn’t be happier with Yaya.