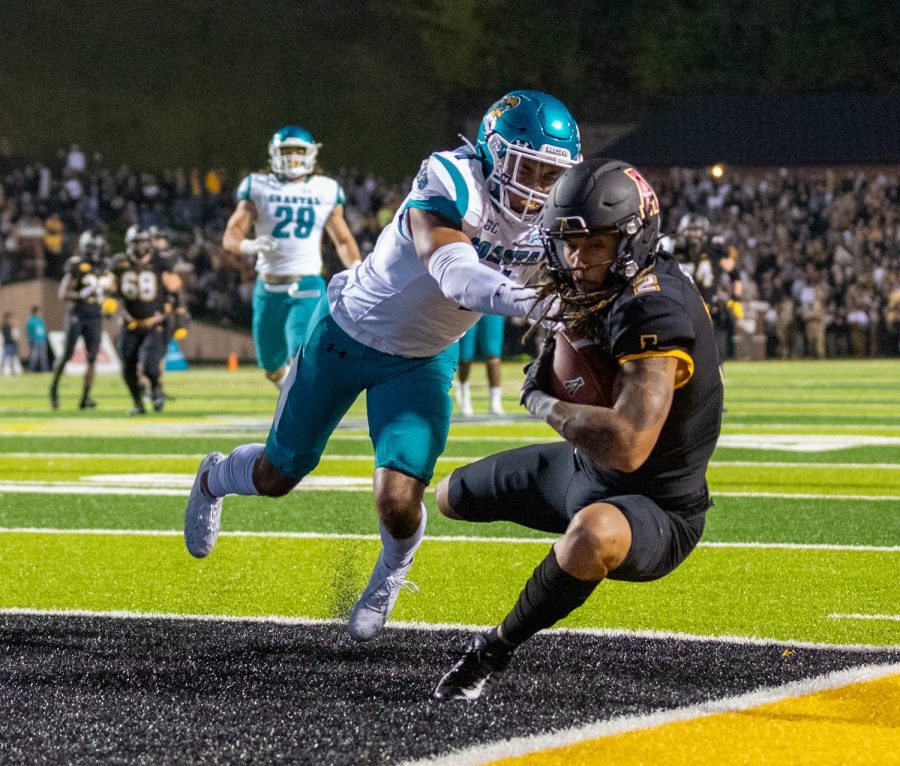 App State wide receiver Cory Sutton scores a touchdown against Coastal Carolina Oct. 20. The Mountaineers went on to upset the No. 14 Chanticleers 30-27 in App State’s second upset win over a ranked opponent, after the 2007 game against Michigan.

App State welcomes Sun Belt opponent University of Louisiana Monroe Saturday for its annual homecoming game. The Mountaineers hope to jump to 6-2 on the year, while the Warhawks attempt to avoid falling to .500, sitting at 4-3 overall this season.

Last week, the Mountaineers secured their first victory against a top 25 program since their upset of Michigan in 2007. A field goal by super senior Chandler Staton lifted App State over No. 14 Coastal Carolina as time expired.

Williams also shined in the Mountaineers most recent matchup against the Warhawks last season, leading all receivers with 60 yards in the air and one touchdown in the 31-13 victory.

Since joining the Sun Belt in 2014, the Mountaineers have accumulated a 5-1 record against the Warhawks, with their lone loss coming in the form of a 52-45 shootout in 2017.

App State defends its 5-0 home record this season, whereas ULM pursues snapping its streak of 10 straight losses on the road over the past three seasons.

A significant aspect of the game will be the turnover battle, as the Mountaineers sit at minus-five this year compared to the Warhawks plus-eight, head coach Shawn Clark said.

“These guys are playing with confidence,” Clark said in a press conference on Monday. “Whenever they get turnovers, they score, and they create issues for the opposing team.”

Historically, the odds have favored the Mountaineers, but Clark said his team is not taking Saturday’s matchup lightly.

“This is a very good team,” Clark said. “Our goal is to be 1-0 this week, and we know coach Bowden will have his team ready to play.”

The Mountaineers and Warhawks kickoff at 3:30 p.m. in Kidd Brewer Stadium and can be seen on ESPN+.