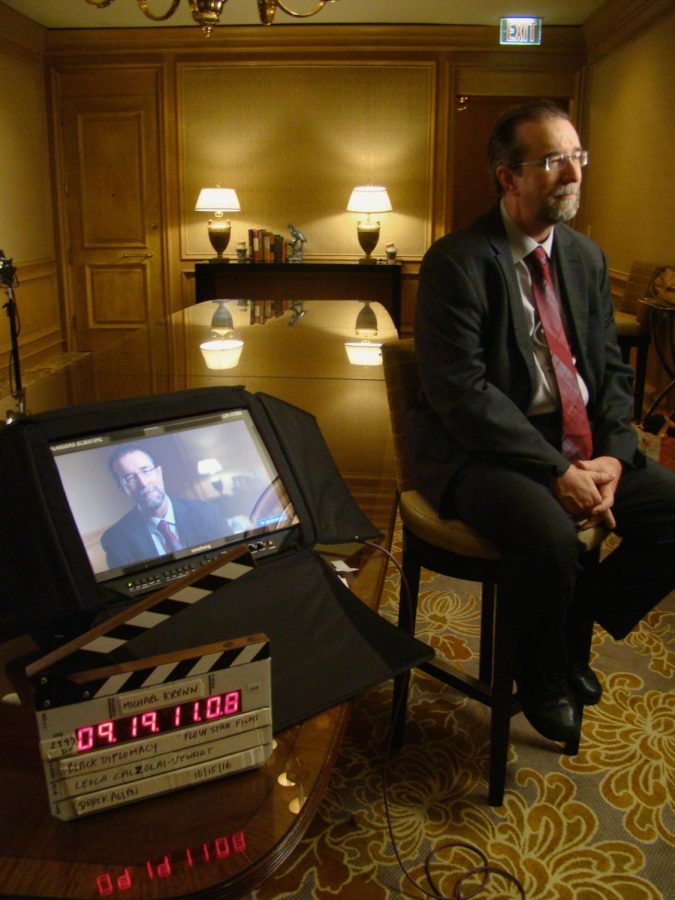 An App State professor’s research has inspired a PBS documentary retelling the story of three influential African American ambassadors during the 20th century.

The documentary, “The American Diplomat,” was developed by Flowstate Films, a Virginia-based independent production company. The ambassadors — Edward Dudley, Terence Todman and Carl Rowan — were the subject of Michael Krenn’s 1999 book, “Black Diplomacy,” the documentary’s inspiration.

“Terence Todman was a force to be reckoned with. He said, ‘That’s fine for other people, but I’m not putting up with it.’ And, eventually, the State Department went over and leased half of the restaurant and put a wall up,” Krenn said. “One half was the integrated State Department restaurant, and the other side was the segregated Virginia restaurant. It was all Terence Todman.”

Krenn, a history professor, began his research focusing on Central American politics in the early 1990s but turned to research race and American foreign relations after the “serendipitous discovery” of a memo buried in research boxes during research for his second book.

“I was at the Truman Library, and I plucked this memo out from 1949, and it was entitled ‘Outstanding Negroes and Appropriate Countries to Which They Might be Sent as Ambassadors,’” Krenn said. “I’d always been interested in race and U.S. Foreign Policy, but I had never thought about that aspect of African Americans and their involvement in foreign policy.”

After the publication of the book, Krenn said he “hadn’t really thought about” his research on the ambassadors until he received a call from documentary director Leola Calzolai-Stewart in 2014.

“She wrote me in 2014, and, you know, that’s 15 years after the book had been published. I had just thought, ‘Well, then, I gave it my best shot,’” Krenn said. “So I said that if you want to use some of the information in the book, I mean, that’s the documentary; it’s not based on the book. But it’s not just that. She said it really inspired her to start digging into this story.”

Calzolai-Stewart came across “Black Diplomacy” after her husband, a member of the Foreign Service, gave it to her in 2014. Calzolai-Stewart said the book was not only a starting point for her investigation into the subject but also reflected deeper personal experiences.

“My husband is a diplomat, and we’ve been a Foreign Service family for about 20 years. So just being a Black Foreign Service family was key to my interest in the topic because it reflects our experience,” Calzolai-Stewart said. “And then reading Dr. Krenn’s work provided a jumping-off point for me; deeper into the history of not only these diplomats, but also of the time period.”

The stories of these ambassadors motivated Calzolai-Stewart to develop a documentary with her partners at Flowstate Films.

“It just seemed like a rich history and a story that hadn’t really been told on film before,” Calzolai-Stewart said. “So I had brought the idea to my partners at Flowstate, and we thought, ‘Yeah, let’s try to tell a story here.’”

Development of the documentary started in 2014, and over the next several years, Flowstate looked for funding from various sources. They eventually received production and development grants from the National Endowment for the Humanities additional funding from Black Public Media and Firelight Media. During this time, Krenn was interviewed once in 2016 and in a follow-up interview in 2021.

“Obviously, the book was an inspiration, but I would say Dr. Krenn himself was an inspiration as well,” Calzolai-Stewart said. “He’s obviously beyond well-informed about the topic. He was a key adviser on the film as part of our National Endowment for the Humanities grant.”

During the development period of the documentary, Krenn ended up partially rediscovering parts of his research — much of which had not been opened since writing his book.

“For whatever reason, I had kept all of the research material for this book, and it seemed like every four or five months Leola would write ‘Okay, what about this memo?’ or ‘You mentioned this in your book,’” Krenn said. “And I would go digging through boxes and photocopy those and send those off to her. But her folks, as well, were going to these libraries and going to different national archives, looking for a film, looking for photos. It was a true collaborative effort.”

“We have a number of faculty over the years who have been involved in documentaries like this, and it’s always a treat in terms of the national publicity that we get as a result,” said James Goff, the History Department Chair, noting that additional faculty achievements can be found in the history alumni newsletter.

The documentary has been screened at the JFK Presidential Library and will be screened on-campus in Plemmons Student Union Room 420 Feb. 22 at 6 p.m.

For Calzolai-Stewart, the documentary is about more than just the ambassadors’ stories.

“Personally, I really do hope that younger viewers, especially younger viewers of color who have never seen themselves in this role before, can take a look at this film and see Black diplomats in action,” Calzolai-Stewart said. “To see that these were people were trying to create space for us in this world. Diplomacy is not for just a privileged few but for all Americans to have a right and voice in how our country is represented overseas.”