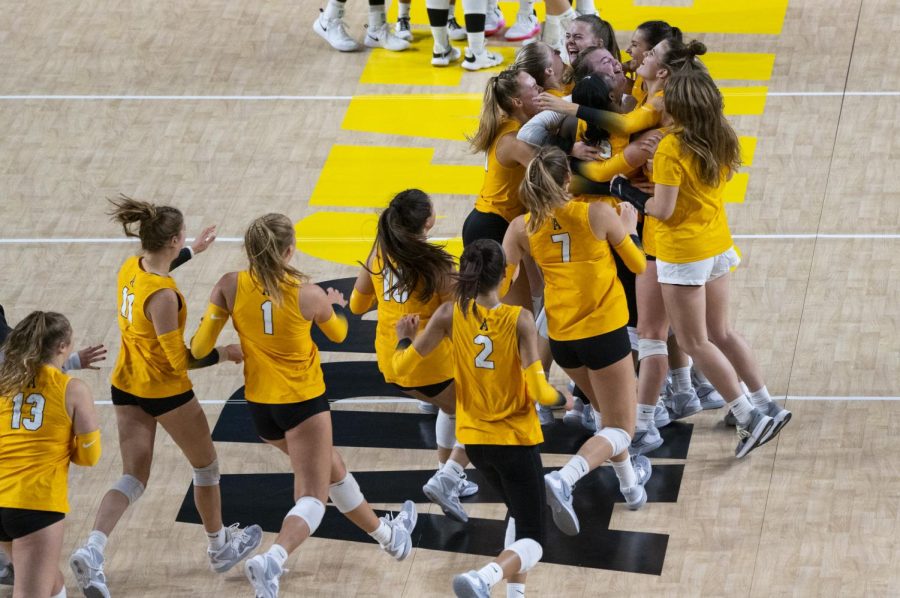 App State celebrates its win over Furman Sept. 9, 2022, capping its second victory of the night.

The App State volleyball team swept the Mountaineer Classic 3-0 over the weekend.

App State opened the tournament early Friday afternoon facing off against Texas A&M Commerce, winning the match 3-1. The team invited some local schools to join the crowd for the home opener to help cheer the Mountaineers on.

“It was awesome to see their support,” freshman middle blocker Maya Winterhoff said. “I can just picture myself later with my class coming here and watching a volleyball game.”

The Mountaineers opened the second set slowly, falling behind early 11-6. The Lions continued their momentum throughout the set, only letting App State cut the lead to two before pulling away with multiple four-point runs. The Lions closed the set with the win 25-20.

The Black and Gold bounced back in the third set, jumping out to a quick 6-1 lead, forcing a Lion’s timeout. Coming out of the timeout, the Lions closed the lead 9-7, with the teams going back and forth trading points. The Mountaineers managed to pull away and close out the set after posting two 3-0 runs to close the set 25-17.

The fourth set saw a back and forth battle early on, with the Mountaineers and Lions exchanging points early. App State began to pull away after a 5-0 run, putting the Mountaineers ahead 14-10. The Lions battled back to get within three, before the Mountaineers used a 3-0 run to go ahead 24-19. The Black and Gold closed the match 25-20, winning the first match of the day.

“Our middles are doing some crazy things,” Denny said. “We are putting up some really good balls because of what our middles do.

The Mountaineers continued their momentum later in the day, facing off against Furman. The Mountaineers won the match 3-2, needing every point to pull away with a victory.

The Mountaineers and Paladins continued their pace into the second set, keeping it close the entire time. Furman took a one point lead before a pair of blocks and kills launched the Mountaineers ahead 21-19. Junior outside hitter Madison Baldridge won the set 25-23 after a final kill.

Furman completely halted App State’s momentum in the third and fourth sets, winning both by a score of 25-21.

The Black and Gold and Paladins continued their back and forth contest into the final set, trading points throughout. After switching sides, the Mountaineers jumped out to a two point lead before Furman battled back, extending their own lead 13-11. The Mountaineers returned with their own three point run to recapture the lead. App State won the match 16-14 after a service ace from Bickley to win.

“In the locker room before the game we talked about it doesn’t matter how long it takes,” Rumley Noble said. “Kudos to them for them to believe and trust in the hard work that we do everyday.”

The Mountaineers had four players with double-digit kills. Sophomore middle blocker Lauren Pledger led the team in kills with 17, Baldridge, Ambrose and Winterhoff all right behind with 12. Setters Sophie Cain and Bickley both had huge games with Cain posting 32 and Bickley 30. Cain also recorded a team high 18 digs, recording yet another double-double on the season. Roper followed right behind with 16 and Huntley with 14. Winterhoff was very active in front of the net, posting six blocks over the contest.

Even after dropping two sets, the team never lost focus on the match.

“We were lifting each other up and that’s a difference from this year to last year,” Ambrose said. “We are all in it together; the bench, the coaches, everybody is in it together till the end.”

Coming out in the first set, the Mountaineers and Blue Hose kept a good pace trading points early. The Mountaineers jumped ahead after a 6-0 run to break away from Presbyterian. Late in the set, App State used a 4-0 run to win the set 25-19.

The Black and Gold’s momentum continued in the second as they dominated the set. After jumping out to an early lead, the Mountaineers used a 7-0 run to propel themselves ahead 21-10. App State closed the second set with a 25-13 win.

App State came out strong early in the third set, leading the Blue Hose 5-2. Presbyterian caught up and cut App State’s lead to one with a score of 8-7 before App State took control. Late in the set, the Mountaineers went on a four point run before winning the set 25-17.

“We talked in the locker room before about how we have to own our home court and enjoy getting to play here,” Rumely Noble said. “It’s awesome to be able to do it in front of our fans and put on a show.”

Players echoed their coach after returning home from two away tournaments, saying the fans were exactly what they needed to see.

“It is amazing. When you get a kill it doesn’t go dead silent,” Pledger said. “You have hundreds and hundreds of people screaming for you. It is an amazing experience and feeling.”

The Mountaineers hit the road again as they prepare for the Hokie Classic in Blacksburg, Virginia, starting Sept. 15 against Western Carolina.