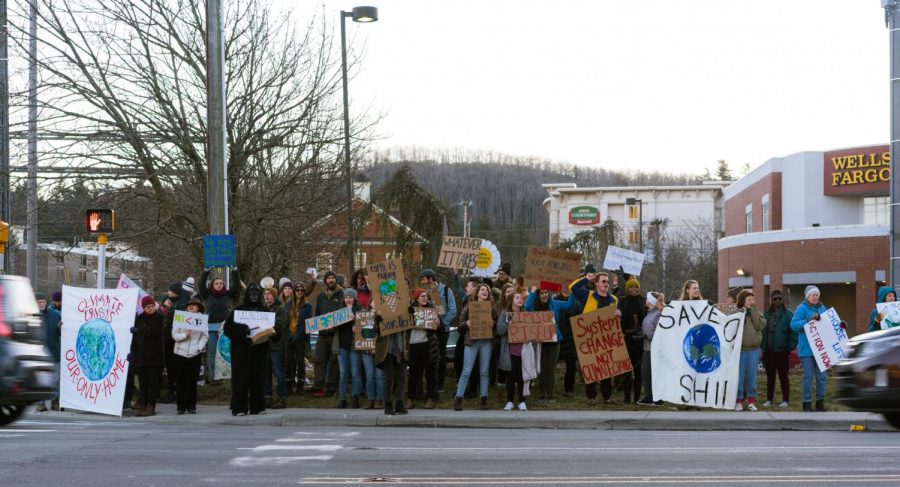 Members of the Climate Action Collaborative chant and hold signs during their parade on Blowing Rock Road toward Highway 105 January 19, 2019.

App State, widely regarded as a sustainable institution, plans to lead the charge for climate neutrality as temperatures across the globe begin to rise.

In the last 140 years, the Earth’s temperature has risen by 1 degree Celsius. Experts argue any further increase will lead to severe droughts in the Mediterranean, extreme flooding in the Northern Hemisphere, heat waves, entire species going extinct, raging fires, biome shifts and a crippling economic blow across the globe. App State says they will help.

“Sustainability at Appalachian State University is not a trend, it is a tradition. Through engaged scholarship, we balance critical, creative and global thinking in a living laboratory, transforming theory into practice and fostering responsible citizenship,” said a statement on the university sustainability website.

However, there isn’t a common consensus across campus about when App State should be climate neutral or when they should have net-zero greenhouse gas emissions.

Here is each group’s perspective:

As a freshman senator, Devin Mullins wrote and introduced the Climate Neutrality Act, which SGA Senate passed unanimously in 2019. Along with all members of the 52nd Senate Session, 28 organizations and 41 individuals sponsored the bill.

The bill calls for “aggressive action” and exploring “all available options” to be climate neutral by 2025. It also advocates for full transparency from the university as they begin “systematic and rapid implementation” of the climate action plan.

Now the Director of Sustainable Development, Mullins said SGA’s goal is “the only one in touch with reality.”

“People will continue saying our vision isn’t realistic or practical, but it’s the only one that’s realistic and practical because we’re running out of time,” Mullins said.

Sam Gass, chairman of the Sustainable Development Committee, said there are a plethora of steps that can be taken to achieve the goal. He said App State could reevaluate its contracts with energy providers, restructure campus buildings, produce its own energy and promote renewable energy usage.

Gass said the administration is busy investing in sustainable scooters instead of solar panels.

He said the SGA plan is the only one that takes into account the underlying issues of climate change in relation to the university.

“It’s the only plan radical enough to avert a potential climate catastrophe,” Gass said. “That’s the truth of it.”

In 2019, the Faculty Senate unanimously passed a resolution calling for significant reductions in greenhouse gas emissions by 2025, and complete climate neutrality by 2035. It called on the university to develop a climate action plan as soon as possible, including the establishment of a Climate Action Committee, and to be transparent throughout the planning process.

Brian Burke, an associate professor of sustainable development and a senator who proposed the bill, said the fact it was passed unanimously “showed an almost unprecedented degree of consensus that this is a major issue and an urgent issue.”

After the bill was passed, Chancellor Sheri Everts called upon the Office of Sustainability to begin creating the climate action plan that the faculty senate and SGA advocated for. Also in response, App State hired an energy manager after the position was vacant for three years, a position required under state law, according to Burke. The chancellor’s office agreed to reinvest all the money saved from renewable energy back into more sustainable energy.

Burke, who no longer serves on Faculty Senate, believes that App State should lead the charge as universities begin to tackle climate change. He says it would be financially irresponsible to not start investing now, because App State can save money down the road using renewable energy.

“If we want to walk the talk and we don’t want to be hypocrites, we need to be leaders,” Burke said.

Burke believes the Faculty Senate’s plan is a “reasonable compromise,” and the least ambitious App State can afford to be without having to question its commitment to sustainability.

“I think the student plan is the best plan,” Burke said. “Anything less ambitious than the Faculty Senate plan is morally reprehensible and not supported by science.”

The Office of Sustainability

Using the guidance of the UNC System Board of Governors, the Office of Sustainability hopes to be completely climate neutral by 2050. However, Lee Ball, chief sustainability officer, said he realizes “we need to do it sooner.”

The OOS is working on the App State climate action plan, AppCAP. Ball said this document will serve as a blueprint of what it is going to take to become climate neutral by 2050 or sooner.

The first draft of AppCAP will come out in early November for the campus to be able to review it. Ball said that it is a “living document” that will focus on climate justice and the environment.

After considering comments from the university community, the office will make adjustments and release its final draft in January. Ball said the OOS has taken a “thorough” and “aggressive” approach to the plan having worked with faculty, staff, students, SGA and members of The Appalachian Climate Collaborative (ClimACT), a collaborative group fighting for climate reform.

In September, ClimACT published a press release announcing they were withdrawing from “the official process” and working on their own plan.

Ball said part of the reason that the plan is still in the works is so the office has adequate time to assess the impact of COVID-19. Office members said COVID-19 has shown them that some aspects of normal life aren’t sustainable, citing that they could attend virtual conferences rather than using gas to drive to in-person ones.

Ball said he appreciates the sense of urgency that the students and faculty share and believes the OOS has the ability to get changes implemented.

“We have the relationships necessary to get this work done. Our plan is collaborative and pragmatic, but we also like to push hard,” Ball said. “We’re really good at finding solutions to perceived barriers.”