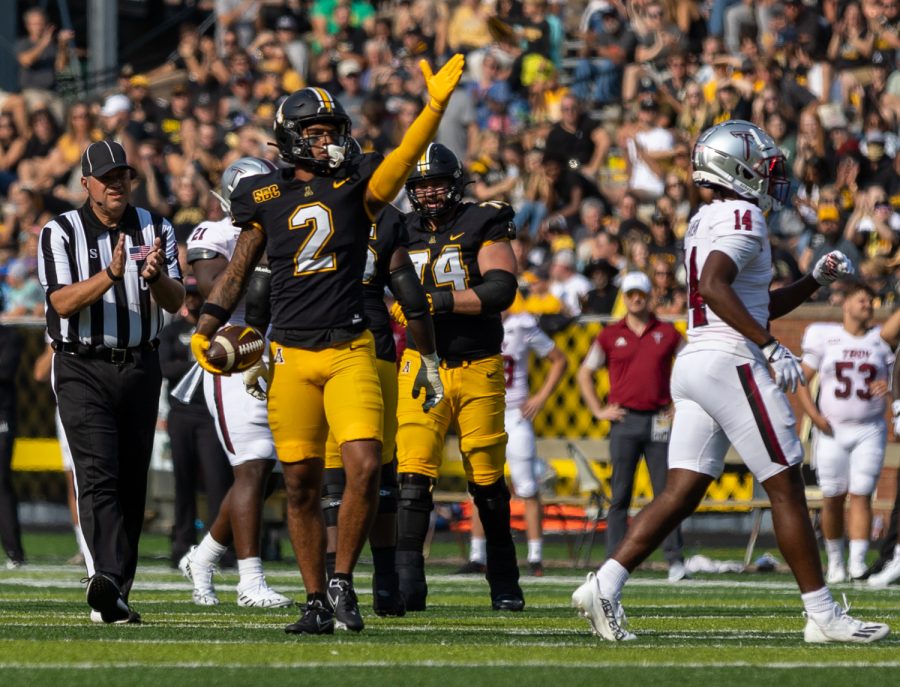 Redshirt sophomore receiver Kaedin Robinson picks up a first down against Troy Sept. 17, 2022.

With the 2022 season quickly approaching, one of head coach Shawn Clark’s first priorities is to identify who will step up in a receiving core that doesn’t have much experience under its belt.

While the receiving group lacks experience, it’s not a particularly young group. Many of the likely starters enter their third and fourth college football seasons. The extra year of eligibility granted by the NCAA to college athletes due to COVID-19 allowed those former Mountaineer receivers to stay in Boone for their fifth and sixth years, relegating players under them to the bench.

“You look at the Christian Horns of the world, the Christian Wells, Dashaun Davis; those guys aren’t young guys, but they’ve never had their opportunity to shine,” Clark said. “They’ve always been a backup, and now they want to be the old guys now. They want to be the playmakers on our team, and we’ve seen that through spring practice, we’ve seen that through summer workouts.”

Wells enters the season with the most prior success of the 2022 receiving core, totaling 28 receptions, 484 yards and seven touchdowns in 27 games. Last season, Wells hauled in two touchdowns: an 80-yarder at Georgia State and a 68-yarder in the Boca Raton Bowl.

Though Wells has seen some success during his career, his playing time has been limited because of the group of receivers that came before him. While awaiting his opportunity, Wells remained focused on improving each season.

“Stay down until you come up and control what you can control. And just keep working,” Wells said. “It’s gonna all come to light someday. I feel like now is my time.”

Sophomore receivers Christian Horn and Dashaun Davis are the only other receivers that have taken the field in more than two games for the Black and Gold. Horn has seen action in 22 games across his two-year career, totaling eight receptions for 125 yards. Davis has 21 games under his belt, notching 14 receptions, 124 yards and one touchdown.

“That whole room is super talented. You got so many guys who can bring so much to the table,” said redshirt junior running back Camerun Peoples of App State’s wide receivers. “So much excitement. So much electricity.”

App State reeled in two transfer receivers who will also play a role in this year’s offense. Redshirt senior Tyler Page enters his sixth season of college football, spending 2017-20 at SMU. Page accumulated 65 receptions for 862 yards and four touchdowns as a Mustang. Redshirt sophomore University of Central Florida transfer Kaedin Robinson joins the Mountaineers after playing in two games for the Knights in 2021, hauling in a 30-yard touchdown as his lone reception.

“I think we’re really close … They want to be great,” said redshirt senior quarterback Chase Brice of his new receiving core. “They’re fast, they have great hands, they’re smart and I think this summer we did a good job of getting on the same page in some areas that we needed to work on.”

“Stroman’s getting healthy, he’s a freak in himself. Michael Hetzel has made some strong pushes this offseason,” Brice said. “I’m excited for it. I think we have a great opportunity ahead of us.”

There are six other wide receivers on the App State roster, two of which have game experience. Redshirt junior AJ Hall appeared in one game last season, while redshirt sophomore Elijah Johnson appeared in two in 2021.

Last season, the Black and Gold completed 255 passes, 197 of which were completed to now former Mountaineers. With nearly 200 receptions and 23 receiving touchdowns up for grabs this season, a new core of receivers get their chance to shine in 2022.

Three games into the 2022 season, the receiving core has totaled 796 yards and 10 touchdowns, including one of the more memorable touchdown receptions in App State history.

The new receiving core wasted no time leaving their mark on App State football and is only getting started.