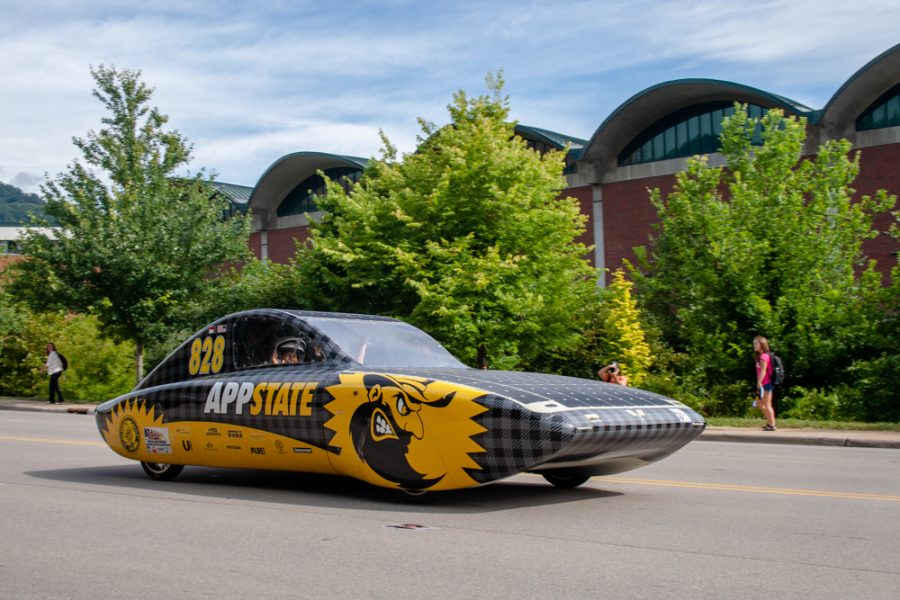 Team Sunergy made a celebratory lap down Rivers Street following their big win for American Solar Challenge that occurred on Aug. 7.

Members of the App State solar vehicle team cheered and high-fived on the steps of B.B. Dougherty Hall Aug. 19 after Chancellor Everts congratulated them on winning the 2021 American Solar Challenge.

Team Sunergy took first place in the American Solar Challenge, a race that carried the team from Missouri to New Mexico in a 964.8 mile journey that put their car Racing On Solar Energy, “ROSE,” to the test.

Everts complimented the team on their hard work, highlighting the other universities who lost to App State in the challenge.

“Team Sunergy competed with grace and finesse against elite universities. Including MIT, you might have heard of it, University of California Berkeley, and Georgia Tech, to name a few,” Everts said.

After the chancellor’s remarks, two members of the team took the podium at the victory event to thank their advisors and teammates.

Jessica Navarro-Luviano, a senior and one of Team Sunergy’s four drivers and co-mechanical director, has been with the team since her freshman year. She took ROSE up one of the steepest hills in the race.

“You have your team who tirelessly supported you the whole way there waiting for you greeting you with laughter, pride, hugs and joy,” Navarro-Luviano said.

“We easily won the award for teamwork,” Cheatham said.

To qualify for the ASC, Team Sunergy had to compete in the Formula Sun Grand Prix in Topeka, Kansas. ROSE only needed to complete 82 laps of the course over two-days. The teams were scored on the efficiency and practicality their cars displayed in the laps.

“We all wanted to see if we could beat Minnesota’s time,” said Sean Riordan, co-business director for Team Sunergy.

App State’s solar team has not always been the complex and accomplished entity it is today. In 2013, students undertook a class project to build a solar-powered golf cart. Over the next three years, the project grew as team members researched solar competitions and wrote grant proposals in an effort to expand the program, according to the Team Sunergy website.

By the summer of 2018, the team had finished construction on the first edition of ROSE just in time to race in the ASC.

ROSE would not see the track for more than two years after the 2018 ASC. Team Sunergy planned to race in the 2019 Bridgestone World Solar Challenge. However, the team did not feel confident enough to race and decided to wait for the 2020 American Solar Challenge.

The team continued to work on ROSE throughout the pandemic in 2020. By 2021, none of the 2018 ASC team remained, and current Team Sunergy members had never competed.

“Even though we had never been to a race before, we were so ready and excited to go to that race,” Riordan said. “We had been working on the car for two years, and we were itching for a race.”

Despite never racing, Team Sunergy won, but now the team is once again going to need new members. Six of the eight members of Team Sunergy’s leadership are seniors or graduate students.

“Right now, my peers on the leadership, they’re on their way out,” Riordan said.

Riordan said that after the win this year, they are sure that they can increase recruitment, and the team feels confident passing the torch to a new generation.

“We’re going to be much more thoughtful about the transfer of knowledge,” Riordan said.

Everts promised to host Team Sunergy at the chancellor’s house, App House, sometime in the coming weeks to continue the celebration of the 2021 ASC victory with cake, pictures and championship rings.

“What began in 2013 as a class project to build a solar-powered golf cart blossomed into an interdisciplinary team that has earned the respect and admiration of the entire international solar racing community. Everyone’s heard of App because of all of you,” Everts said.

Sean Riordan is a columnist for The Appalachian.