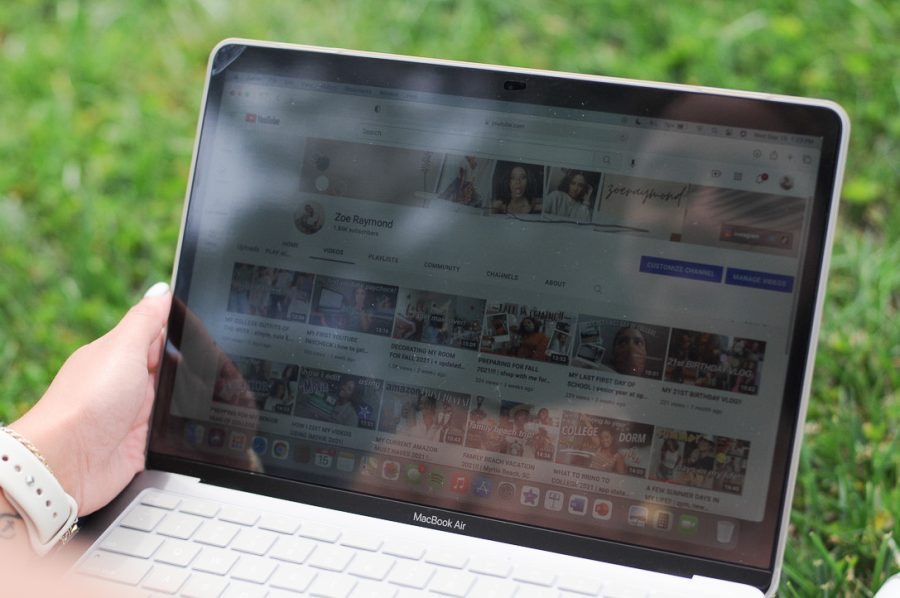 Raymond gained over 2,000 subscribers in the past year. One of her most popular videos is her tour of campus. Raymond said students have approached her saying her video is one of the reasons they chose to enroll at App State.

The top result for “App State tour” on YouTube isn’t a university-produced video but rather one student’s passion project.

Zoe Raymond, a senior public health major, balances classes, work, life and a side project that has garnered her attention from strangers on King Street and unexpectedly at work.

The Appalachian · Zoe Raymond Talks About Being Recognized by Subscribers

“It’s crazy honestly that there are people on campus who know who I am,” Raymond said.

Now with more than 2,000 subscribers, Raymond has become one of the few YouTube vloggers at App State, though she put off starting her channel for years.

A vlog, which is short for video log, is a blog in video format especially popular on YouTube, where creators document an event or what they do regularly.

After discovering YouTube vlogging in middle school, Raymond decided she wanted to do the same, but scared of what people would think, she delayed posting videos in high school. When she arrived at App State, Raymond said she realized that “nobody cares.”

“I’d always wanted to do it, and I just decided I needed to stop overthinking it and just click record and just do it,” Raymond said. “Or else I would have never done it.”

Raymond posted her first video July 7, 2020 and decided that to start her channel, she wanted to help people. She used the video to tell viewers about her journey embracing her natural hair, hoping it would help someone else with curly hair.

The video now has over 3,500 views, and her App State tour video has around 6,200 views. Raymond said she’s glad those videos can help people who might need it, like those thinking of attending App State.

“It’s just crazy to me to know that I’m helping people,” Raymond said. “I never thought I could do that, which is crazy, so it means the world to me when people share my video or comment or comment something nice.”

Now, Raymond posts videos on college advice, day in the life videos, night routines and more on her normal schedule. Some of her most viewed videos are an organizing video where she deep cleans her bathroom, which has over 10,000 views, and another where she decorates her apartment for fall, which has over 15,000 views.

Raymond mostly posts on Fridays and said she gets inspiration for videos from her everyday routine and with the help of her friends and family, who give her video ideas.

Hannah Rogers, Raymond’s roommate and friend, helps her film videos like her App State tour and brainstorm video topics when she needs it.

“I mean, I know that’s not an easy thing to put yourself out there like that on the internet,” Rogers said. “But I think she has a lot of great advice to give, and she’s a really good example.”

Rogers said she enjoys watching her roommate grow into herself through posting on YouTube and getting recognized for her efforts.

“She’s a really hard worker and a student, and it’s really cool to see people recognize her and come up to her and be like ‘You’re the reason I decided to go to App,’ just because she’s really giving them true insight of being a student,” Rogers said.

With a smaller audience, Raymond is enjoying the low pressure that comes with running a small channel and said she’s thankful for the room it gives her to keep her life private.

“People don’t need to see every aspect of my life,” Raymond said. “I don’t think that I’m going to post everything about my life, and I’m totally okay with that because that would be super scary and just unnecessary.”

Raymond said YouTube has motivated her to continue posting past college and even pursue a full-time career on the internet after completing graduate school, but she doesn’t want to be as well known as some YouTubers who have subscribers in the millions.

“I do really want YouTube to be the thing that I do every day and just film my life pretty much, hopefully not too much,” Raymond said. “I don’t want to be super famous because I feel like that would just be a lot of stress. But enough to where it’s something I can do and be fine and happy.”

However, Raymond has other concerns besides her future and balancing her responsibilities, including the challenge of filming in public.

“If you ever see me in public with a camera, don’t look at me,” Raymond said.