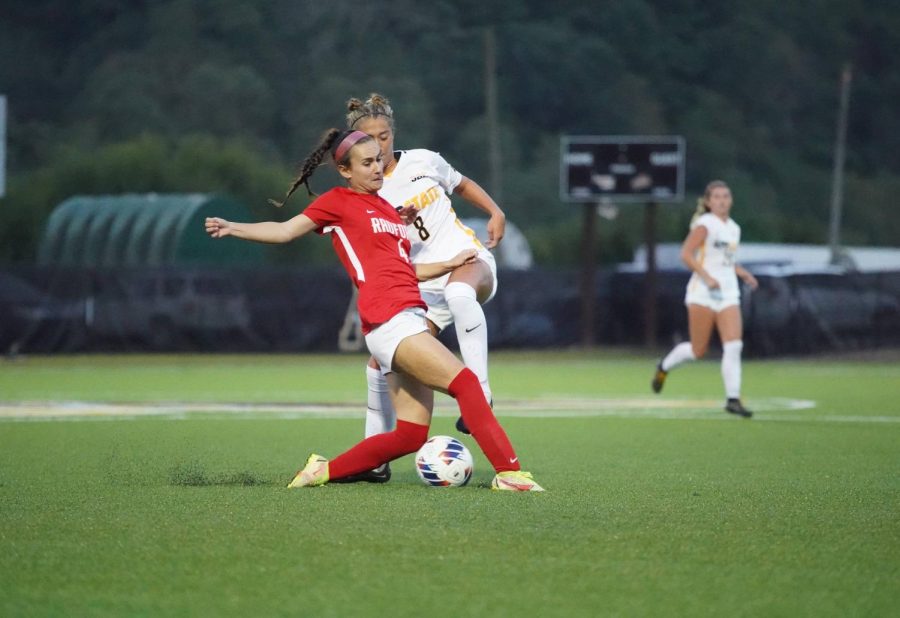 Freshman defender Shannon Studer contests a Radford attack in the Mountaineers' matchup with the Highlanders Sept. 15, 2022.

App State soccer drew 2-2 with the Radford Highlanders Thursday night at the Ted Mackorell Soccer Complex. The Mountaineers secured a subsequent 1-0 win against the University of Louisiana Monroe in their first Sun Belt Conference match Sunday morning, marking their second win of the season.

On Thursday evening, it seemed as though App State soccer finally hit its stride despite the cold conditions. The Black and Gold scored two goals, both of which came from junior forward Izzi Wood in the first half.

The opening 45 minutes for the Mountaineers were blistering. Coach Aimee Haywood’s side was defensively clinical, alert on the attack and controlled the match at a breakneck pace.

The first goal of the evening came after just seven minutes, the result of a free kick taken by Wood after a foul by Radford defender Saleena Lynch. The shot was an arcing cross taken just outside the 18-yard box, putting App State up 1-0.

The second goal of the evening came four minutes later when Wood netted another goal for the Mountaineers, the result of a quick ball into midfield from the right. The rest of the half proceeded with mesmerizing long ball play and ended with the Haywood’s side 2-0 up.

Radford’s first goal came as the result of a penalty goal kick taken by Highlander forward Alexeis Kirinos after 52 minutes. The final goal of the match came 62 minutes in with a quick shot into the top right corner by Radford forward Lilly Short, assisted by Kirinos.

After a brilliant first half and a grueling second half, the Mountaineers ended 90 minutes against Radford 2-2.

“I think we’re in a good place in terms of mentality right now, we just need to get a result,” Haywood said.

The Mountaineers finally got their result Sunday morning, winning 1-0 against ULM.

The first half was aggressive and gritty, seeing neither team score under the oppressive heat of the mountains on matchday. While App State was alert on the counterattack, the Warhawks were matching the Mountaineers pace for pace. This was evidenced by the amount of time ULM soccer spent in the Mountaineers half of the field and their relentless attack on possession.

The Warhawks style of play necessitated the Black and Gold to play in a manner reliant on short passes rather than the long ball style of play that the Mountaineers more effectively play. This difference in style forced App State to not only be defensively strong, but offensively alert. After a vexing first half, both sides were tied 0-0 at the break.

Contention began 49 minutes into the match when junior midfielder Katie Fuller was shown a red card, an initial yellow for a foul and a subsequent yellow for unsporting behavior. The red card ignited outrage from fans and frustration from the coaching staff. Haywood was shown a yellow card for her reaction to the foul.

After Fuller was ejected, the Mountaineers were set to finish the half with a team of just 10 players. The Black and Gold responded to the adversity by scoring a meteoric goal in the 63rd minute.

Freshman defender Shannon Studer scored a powerful, arcing goal for the Mountaineers, the result of a clinical shot into the top right corner from just outside the 18-yard box.

If the cards awarded to App State early in the match incensed the crowd, the goal made the environment in the soccer complex absolutely electric. The rest of the second half saw resilient, inventive soccer from the Mountaineers to hold onto their 1-0 lead and win their second match of the season.

App State plays its next match Thursday against Coastal Carolina at the Ted Mackorell Soccer Complex at 6 p.m. ESPN+ will stream the game live.