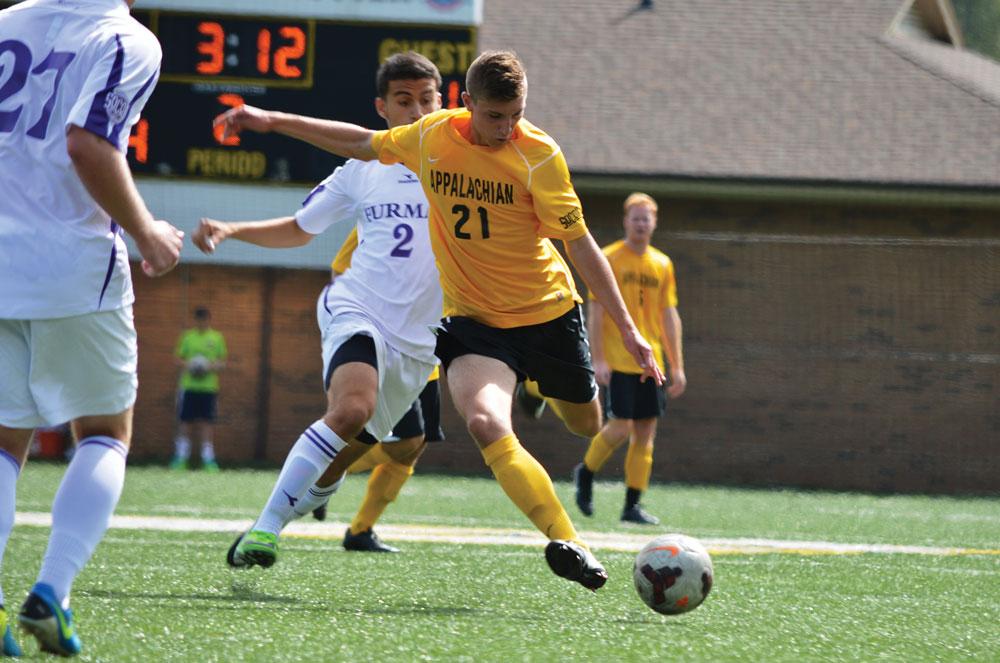 App State men’s soccer opens up its season with a non-conference matchup against University at Albany, SUNY in Harrisonburg, Virginia, Aug. 29.

The matchup is one of the Mountaineers’ 11 non-conference contests this year, which composes the majority of its season. They will only play five Sun Belt Conference games, but the new opponents will present new challenges to head coach Matt Nelson and his squad.

“I think it’s good for the team that we have different competition, because in the Southern Conference we were playing the same teams over and over,” senior defender Walker White said. “I feel like [Nelson] has grown as a coach because now we’re focusing on one game at a time and not the season as a whole, which is helping us focus a lot more on training that’s a lot more specific to what we need week by week.”

Eight freshmen will join the Mountaineers this season. Nelson and junior midfielder Alex Herbst said they have been impressed with the speed at which the newcomers have adapted to the program.

The new roster for the Mountaineers came together to lead the team to a 3-0 mark in exhibition contests earlier this month. The squad defeated UNC-Asheville, Campbell University and High Point University by respective scores of 2-1, 2-1 and 1-0.

“Our older players have done an excellent job working with our new players on team spirit and chemistry,” Nelson said. “It’s been excellent. They spend a lot of time with each other off the field and they like each other, so I think that goes a long way in having the success we’ve had in preseason.”

Herbst said he and Nelson are working to ensure that the team remains focused on the game ahead of them rather than worrying about how the new opponents are scouting them.

“I don’t know how we’re seen specifically, but I know after preseason that they know we’re a top contender in this conference,” Herbst said. “I think they’ll be playing us that way, expecting us to be a better team.”

App State’s first home game is set for Sept. 12 against Presbyterian College. Sun Belt play begins for the Mountaineers on Oct. 3 on the road against Hartwick College.

The season will conclude with the Sun Belt conference tournament Nov. 13-16 in Statesboro, Georgia.

Women’s aiming to back up high ranking with solid play

App State women’s soccer wasted no time getting back into the swing of things as it dominated Elon University 3-1 in its season opener Sunday.

Junior defender Merlin Beckwith led the team with two of the three Mountaineer goals scored in the second half.

The Mountaineers will play eight more non-conference games this season before opening up Sun Belt Conference play in Little Rock, Arkansas with a game against University of Arkansas at Little Rock on Sept. 26.

“It shows the other teams that don’t know us that we’re a force to be taken seriously this season,” head coach Sarah Strickland said. “We may move up or down from the rank as the season goes on, but right now it shows us as a top contender.”

Senior forward Julia Holz said the team will have to adjust to many changes in midfield and on defense, as the team added 11 freshmen and lost key players Jamie Lockie and Sam Neill to graduation.

App State will be joined in the transition from the Southern Conference to the Sun Belt by long-time rival Georgia Southern University. However, the other eight Sun Belt teams will present new challenges to the Mountaineers.

“The thing that’s different about this year is that we’re very deep,” Holz said. “When there’s someone on the field, then there is someone equally as good on the bench who can give them a break. That’s something I don’t think we had a lot of last year.”

The Mountaineers will play seven home games this season and 11 road games. The season concludes with the Sun Belt conference tournament in Mobile, Alabama, Nov. 5-11.