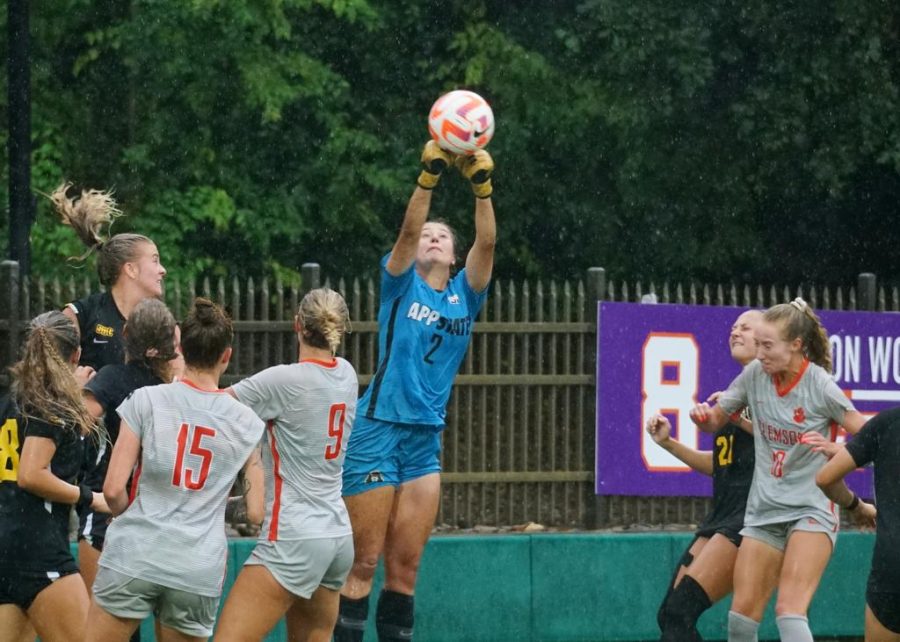 App State soccer ended its fifth match of the season with a 3-0 defeat at Clemson’s Historic Riggs Field. The defeat against the Tigers signals the break in the Mountaineers’ undefeated record this season.

The difficulties for first year head coach Aimee Haywood’s side began early with the match delayed nearly three hours due to two rain delays. These tough conditions were reflected in a rough match for the Black and Gold.

The Tigers’ performance can only be characterized as fast, aggressive and unforgiving. Clemson recorded 32 total shots on goal with the side’s first chance coming three minutes into the match.

App State soccer’s bright spot was its stellar defensive play reflected in its clever and clinical implementation of the 4-3-3 formation. This precise defensive work on the part of the Mountaineers was necessary to field the incredibly high press from the Clemson Tigers — evidenced by the amount of time the Tigers spent in the Mountaineers’ defensive third.

While Clemson was staggering on the counter attack, the Mountaineers made them work for every goal scored. The first goal came just 32 minutes into the match by Clemson forward Caroline Conti. Conti’s goal came on a corner kick, which despite two great clearance efforts from the App State midfield, just slipped past the gloves of senior goalkeeper Kerry Eagleston. The Tigers netted their second goal with a clever strike from forward Maria Manousos off a rebound outside the 18-yard box after 49 minutes.

The third goal of the evening came from an initial penalty taken by Megan Bornkamp, which was cleared by Eagleston. After the initial clearance by Eagleston, the ball was quickly intercepted by Manousos and chipped into the center to the feet of Clemson forward Sydney Minarik, who quickly netted the Tigers a third goal.

The stellar defensive work of goalkeeper Eagleston can not be discounted in Sunday’s performance, as evidenced by the season-high 13 saves she recorded.

The Mountaineers face the East Tennessee State University Buccaneers at home  Thursday at 7 p.m. ESPN+ will stream the game live.