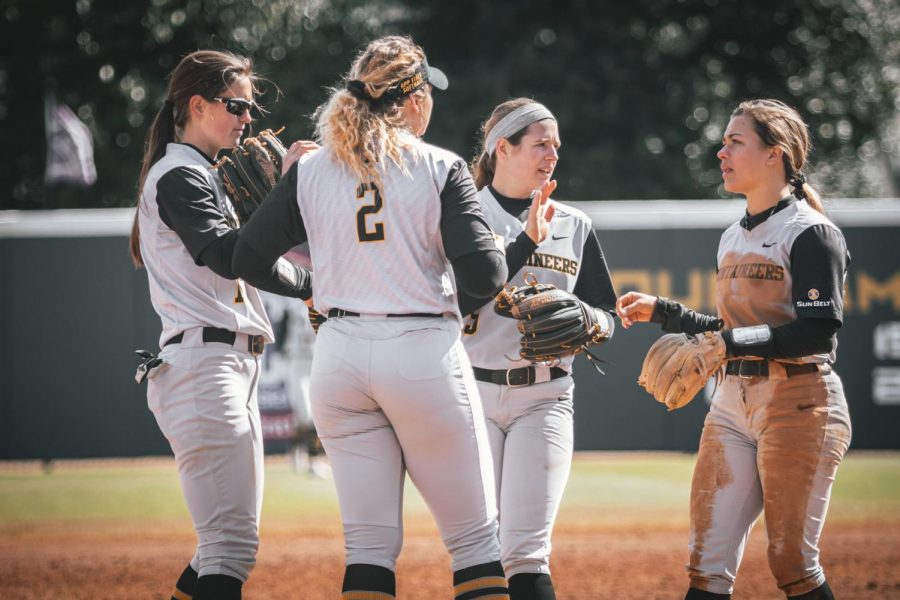 Members of the App State softball team convene in the infield during a game against Oakland last season. Before the pandemic interrupted their season, the Mountaineers were 13-9, including a 1-0 shutout of Virginia to open the year.

When App State softball head coach Shelly Horner arrived in Boone in 2017, she joined an organization that had gone 14-34 and 2-22 in conference play just a season before. As the 2021 season commences, she leads an experienced team composed of seven returning seniors that has recorded a winning record in two straight seasons.

Hoerner understands the benefit that comes along with having an experienced group of leaders on her team.

“They have been the rock of this program,” Hoerner said. “It makes it simpler for myself and our staff, they know the expectation of what I (want) and how I want it done.”

With a solid incoming group of freshmen on this season’s roster, Hoerner appreciates the relationship that the newcomers and tenured leaders have developed.

The infield has an advantage in experience, as each position returns. Keri White, Caylie Kifer and Sidney Russell each return as fifth-year seniors among a solid group of underclassmen.

Fifth-year senior Gabby Buruato, who led last year’s team with a .339 batting average, returns to a dynamic outfield as a starter, alongside junior Mary Pierce Barnes and sophomore Emily Parrott. With the addition of freshmen Shelby Cornett, Abby Cunningham and Kayt Houston, Buruato is prepared to take on her role of being a mentor.

“I think a big thing on our team is that you have to know your role,” Buruato said. “I try to be there for anybody that doesn’t know what our program expects.”

Senior leader Baylee Morton and redshirt sophomore Taylor Thorp return as catchers, and versatile freshman Shelbi Tucker, who can also play second and third base, rounds out the group.

“When we first came here our pitching was very weak,” senior infielder Sidney Russell said. “When Kenzie came, she showed the program what we were building, and as the years have gone by, our pitching has really improved.”

Despite falling to Charlotte 4-3 after eight innings in their Feb. 12 season opener, App State bounced back to pick up a 12-7 win Tuesday, now sitting at 1-2 on the season. The team is hopeful to continue their groundbreaking success of the past couple seasons, and to further evolve the program.

“We have a saying — ‘it’s on the team, it’s on us as a whole’ — and this specific senior class has really taken to that,” Hoerner said. “What they had when they got here, it’s not what it is now, and I feel that they’re very appreciative of that.”

The Mountaineers went 2-1 in a series at UNC Greensboro over the weekend to move to 3-3 on the young season. Next up for App State is a four-game weekend series at UNC Wilmington on Saturday and Sunday.