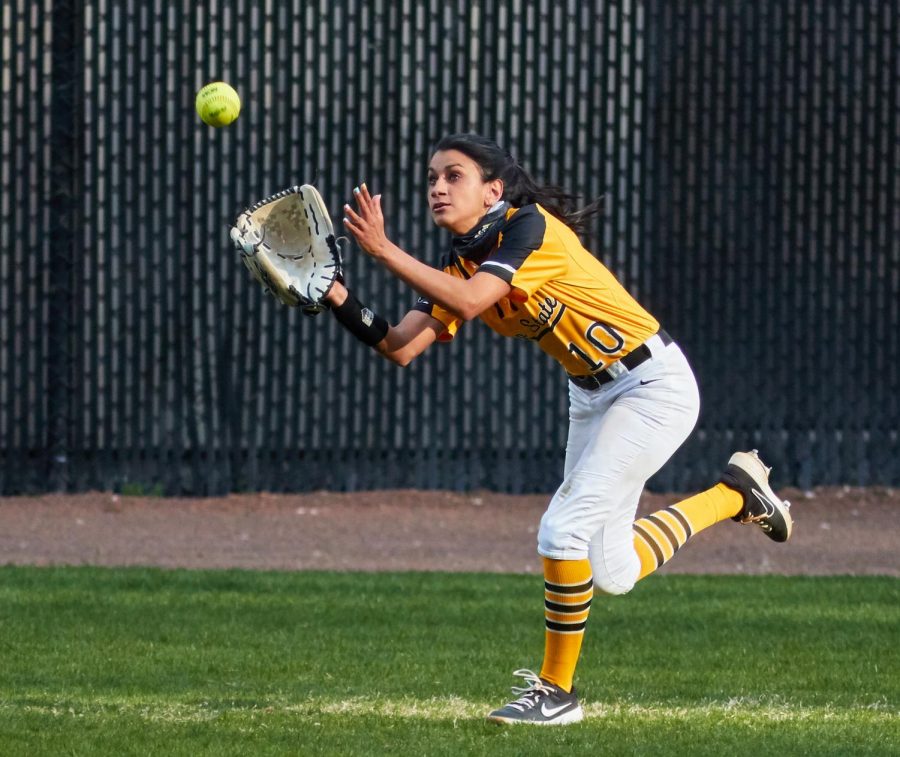 App State senior outfielder Gabby Buruato makes a play in the Mountaineers' win over UNCG April 7 in Boone. Buruato has been locked in at the plate this season, leading the team with a .370 batting average, good for No. 10 in the Sun Belt.

App State softball hosted Louisiana-Monroe for a three-game series on April 10 and 11. The Mountaineers were victorious in all three games, completing a sweep and setting a new record for consecutive wins at nine in a row.

“It’s our first sweep of the season, it feels really great especially with how the weather was starting the weekend,” said freshman pitcher Delani Buckner.

Senior pitcher Kenzie Longanecker got the start for the Mountaineers in game one and pitched five innings while giving up two runs, two walks, and striking out four.

“We always want to go out there and start off strong,” Morton said.

The Warhawks reduced the deficit in the top of the fourth: after a walk from Madelyn Fletcher, Kennedy Johnson hit a home run to right center field to make it 6-2.

Senior infielder Caylie Kifer added another run to the Mountaineer lead in the bottom of the inning with a solo home run to give App State a 7-2 lead. Buruato opened the bottom of the fifth with a triple and outfielder Mary Pierce Barnes followed it up with a walk. After Barnes stole second, Thorp hit a sacrifice fly to left field that allowed Buruato to score and extend the lead to 8-2.

This score was the last of the game, as the weather forced a rain delay after the fifth inning and the score was made official the next day.

“Just to be able to walk away with that win, playing in the rain is huge for us,” said head coach Shelly Hoerner.

Senior pitcher Sydney Holland got the start for the Mountaineers in game two and struck out three while giving up three hits and allowing two walks in her seven scoreless innings of work.

In the bottom half of the third, Morton recorded the first hit of the game for either team on a single up the middle. Houston followed up with another single and Morton advanced to second. Freshman utility player Sidney Martin came into pinch run for Morton and scored the only run of the game after a throwing error at third base allowed her to cross the plate. The inning ended with a score of 1-0 in favor of the Mountaineers.

Hoerner said she was happy with the hits her team picked up in the third to help push across the game’s decisive run.

Fletcher recorded the first hit for the Warhawks in the top of the fourth on a single to the right side of the infield. In the top of the seventh, the Warhawks got the tying run on base after a single from Kelsey Giddens, however, the next batter hit into a double play and the Mountaineers won 1-0.

App State starting pitcher Delani Bucker secured her third win of the season in game three after pitching eight scoreless innings on two hits and one walk while striking out three.

In the top of the seventh, Buckner recorded her third strikeout while keeping the game tied at zero. Thorp flew out to left field in the bottom of the inning to send the game into extra innings.

After retiring the side in order in the top of the eighth, White got on base with a single to the shortstop in the bottom of the inning. Kifer advanced White to second on a sacrifice bunt, setting the table for Morton to drive a walk-off double to right center. White came around to score and the Mountaineers won 1-0.

“That was a great feeling to get the win for my team,” Morton said.

The Mountaineers look to continue their historic streak of wins this weekend with a three-game series against Georgia Southern in Statesboro on Saturday and Sunday.