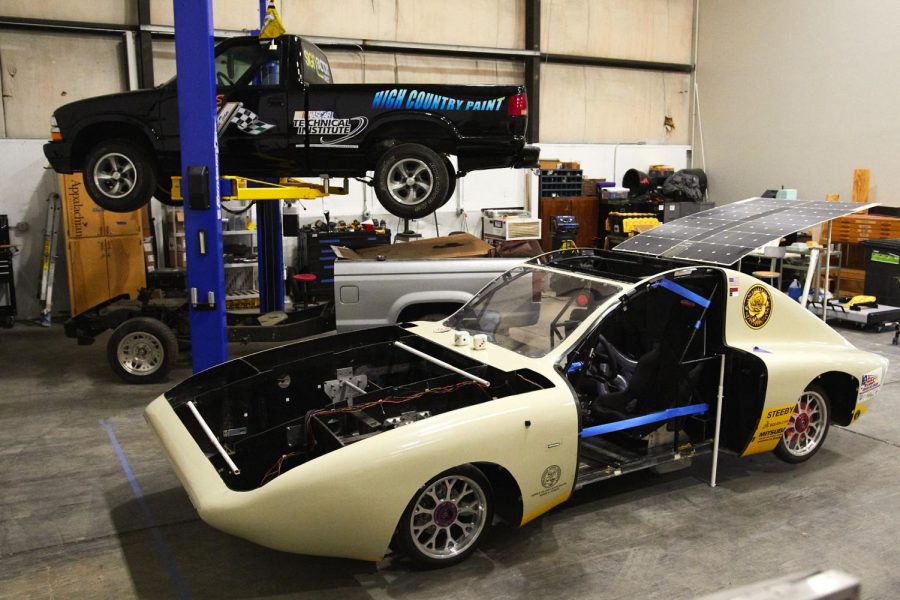 App State's Solar Vehicle Team's car, ROSE. It was built by the team's members by scratch and has a top speed of 60 mph and a range of 300 miles.

Members of App State’s Solar Vehicle Team will be behind the wheel of their solar car “ROSE” this summer in an endurance race against other universities alongside the Santa Fe trail from Missouri to New Mexico.

The Solar Vehicle Team, composed of App State students, faculty and staff, was established in 2013 to “research and develop solar-powered race cars,” according to the App State sustainable technology and the built environment webpage. Every year, the university sends roughly a dozen students to races across the U.S. to serve as drivers, strategists and supporters.

The SVT is student-led and funded largely through sponsorships and donations.

“I was just astounded when I saw it,” Riordan said. “I’m excited for it, and I know there’s other students on campus who would be excited for it but don’t know about it.”

He said that the team is for students and “it almost seems like a waste” if students don’t get interested in the team.

Riordan said that the team has room for all students regardless of major. He said whether it be media management, photography, data analysis, coding or design, “any student interested can find a place with us.”

Faculty member Chris Tolbert has served as the SVT Lead Adviser since its founding. Before working at App State, Tolbert taught at West Wilkes High School and started an electric vehicle program there.

He wanted to do something for the at- risk kids in his classes, kids that didn’t want to finish high school or those without major aspirations beyond it, something they would take an interest in. His high school students raised money and built an electric Mazda Miata and Tolbert said it was a “teary eye” moment when his students got to present it to App State students.

Tolbert said he’s best able to empower students to learn through inquiry-based learning, where students become the experts and find solutions to difficult problems rather than being told the facts by a teacher. Tolbert said he wants his students to graduate with experiences, with “rusty, beat up” tools instead of “bright and shiny” ones.

The shell of the team’s first car, the “Apperion,” was donated by Iowa State’s solar vehicle team in 2015. The Apperion placed second at the 2017 Formula Sun Grand Prix in Austin, Texas and now is on display at the North Carolina Museum of Natural Sciences.

Their newest car, ROSE, was built entirely from scratch by the SVT. ROSE, which stands for Racing on Solar Energy, has a top speed of 60 mph and a range of 300 miles.

ROSE placed third in the cruiser class at the 2018 Formula Sun Grand Prix, which qualified the team for the 2018 American Solar Challenge. App State tied with the University of Minnesota for second place in that 1,800 mile race from New England to Oregon.

ROSE will race again next summer at the Formula Sun Grand Prix and the American Solar Challenge, Tolbert said they are feeling optimistic. The 2020 races were canceled due to COVID-19.

When COVID-19 hit, Riordan said everything in the warehouse was left as it was until they came back this fall. To limit the spread of the virus, the SVT requires masks in their warehouse, has hand sanitizing stations, allows only three students and one staff member in at a time and requires proof of completion of the ASULearn COVID-19 module.

The team is preparing ROSE for this year’s race by optimizing its steering and suspension, redesigning its electrical system and improving the interior, which has two seats, cupholders and a 7-inch digital dashboard with GPS. Once the team feels confident with the car’s reliability, they will focus on improving its range through test drives and begin training student drivers throughout the spring semester.

When the car is ready, Riordan hopes they can take it on campus to show the App State community the work they have done.

To spread awareness about the team, Riordan said STV will publish newsletters on their website.

They will hold an interest meeting on Nov. 11 at 5 p.m. Students who want to get involved with the team can contact the SVT through their website or email [email protected].