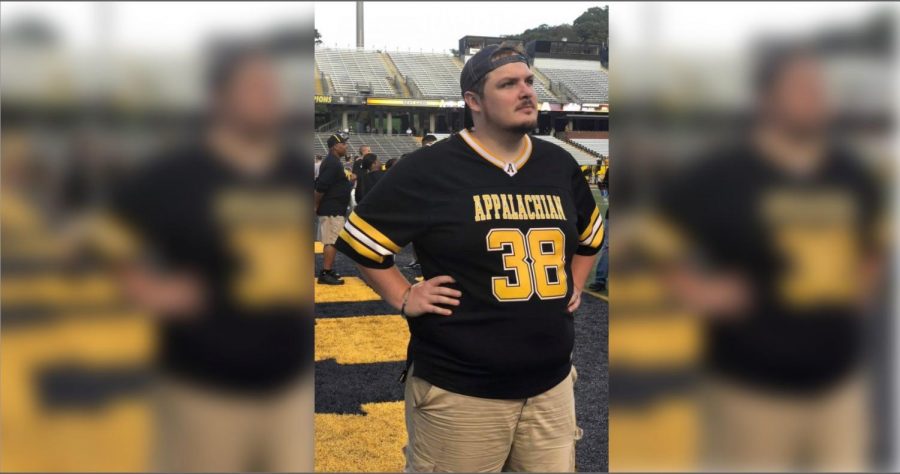 Michael Morgan, a 2019 App State grad, was diagnosed with leukemia for the third time in December. Morgan's wife, Emily, organized a GoFundMe to help pay for the medical bills. With help from the App State Twitter community, donations met the fundraising goal within two days.

Michael Morgan, a 2019 App State graduate, has supported and cheered on the Mountaineers since he was a student, and is also very active with other fans on Twitter.

In late December, Morgan was diagnosed with leukemia for the third time and had to prepare to fight it again.

“Leukemia is measured in blasts, which is like the percentage of leukemia cells in your blood. I was at 5% in my central nervous system, which means they found it in my spine,” Morgan said. “We started doing spinal chemotherapy, which punctures where they take fluid out of your spine and put some chemo fluid to fix what’s going on.”

Morgan has been going through these treatments since his recent diagnosis, and the doctors noticed the leukemia cells returning in the early stages, helping his body fight them off.

Immediately after he announced on Twitter that he would be fighting leukemia again, Morgan’s wife put up a GoFundMe for $5000 to help cover the medical costs since he was unable to work at the time.

“My wife has been my number one supporter through all of this, been the one taking me to the hospital, making sure that I’m in good shape all the time,” Morgan said.

Fellow App State alumni and fans he connected with on Twitter saw the GoFundMe, and pitched in enough to meet the goal in just two days. Fans of other Sun Belt programs also stepped in to help.

“It was really crazy because it wasn’t just the App State community. We also got help from Louisiana people, we got help from Georgia Southern people. Everybody came together, people that I’m usually trash talking to on Twitter with all this stuff about ‘App is great and everybody else sucks.’ They all came together,” Morgan said.

When Morgan and his wife put out the GoFundMe, many App State fans retweeted and shared it with others, including a group that goes by “The Cone Gang,” which is run by recent alumni who are huge sports fans, and more specifically, huge basketball fans.

“We initially met him because he was always in the (Twitter Live chat). He would always ask us questions and that’s how that relationship started,” said Parker Stone, who runs @ConeEnforcer on Twitter.

Through this connection, the group found out about Morgan’s third battle with leukemia and made sure to do their part in making sure he’d be okay.

“He started talking about the medical things he was going through and posted that link to the GoFundMe and it was a no-brainer. As soon as I saw it, I donated immediately and retweeted it,” said Will Strickland, who runs @AppStateConeBoy on Twitter. “He’s someone who’s nice, we have that common experience at App and I donated right away.”

This was a sentiment felt by the entire group as well as the App State community. Through their connection at App State and on social media, they decided it was only right to do anything to help.

“You get into these Twitter fights about the football team and basketball team, but as soon as someone posts something from their personal life, it leaves that level and moves on to a community help event,” Stone said. “When you can help a Mountaineer, you’re gonna help a Mountaineer.”

This group’s connection to Morgan was limited to social media due to the pandemic, but the group has plans to meet him once it’s over.

“If the pandemic wasn’t happening and we could’ve gone to the football games last year, I know we would’ve met up and maybe tailgated together and sat at the game together,” Andrew Curry said, who runs @Section15NeedsU on Twitter.

Morgan was taken aback by the news when he found out how quickly the goal had been reached, and he said it took off a large amount of stress for him while preparing for a third bout.

“It was amazing to see the support that we got from the App State community. Everybody really came together and I got a lot of help from ‘The Cone Gang’ and all of the other people who helped share my stuff. It was crazy to see the amount of support people were willing to give,” Morgan said.

Beyond the support from the GoFundMe and social media, Morgan was surprised with a gift from the men’s basketball program. Head coach Dustin Kerns and the team sent him a message of support signed by Kerns and the whole roster.

“Michael has been a loyal supporter of the program and a member of the App family. He has shown incredible bravery and courage during this time. We know Michael is a fighter and we are fully behind him as he continues to fight,” Kerns said.

Morgan is a fan of all App State sports and was shocked to receive a gift like this directly from the program.

“It meant a lot. Especially this season, I told myself I want to watch more basketball,” Morgan said. “I never would’ve expected that, but just to see the support from the school is pretty great.”

In late January, Morgan announced that he is officially clear of leukemia cells, but will continue to go through the treatment as it is routine to finish in caution. He also found a new job after one interview.