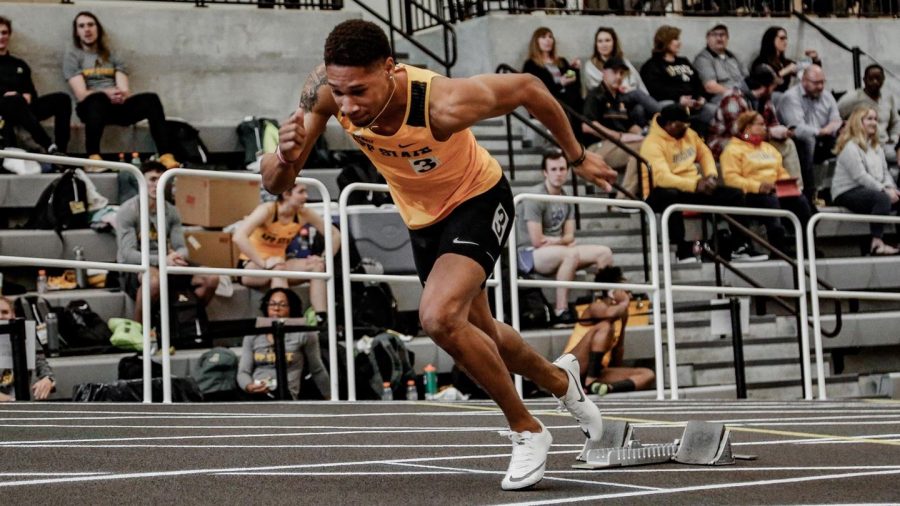 When junior sprinter De’Shawn Ballard was a kid, he would often find himself outside running around in the country. Given this upbringing, it is no surprise he decided to run track when he got into high school.

Early on in his high school career, Ballard wasn’t a star. He started running track at Laney High School in Wilmington his freshman year, but it took a couple of years before he started to develop into the athlete he is today.

There weren’t a lot of schools looking at Ballard, but McLean saw something there.

“One thing you can’t coach is height, and for him, he already had that,” McLean said. “He had really good technical attributes in his running form, and then that was one thing I knew I didn’t have to coach.”

The summer after his senior year at Laney, Ballard had a breakout postseason. He made it to the high school nationals, where he competed in the 200-meter dash and the 4×100-meter relay. Ballard finished first in both events.

“I recruited him when he was OK, and then that summer he was one of the top sprinters in the country, so it was one of those rare gem finds that I got fortunate on,” McLean said.

After showing the country what kind of athlete he could be, Ballard caught the attention of other schools. However, Ballard decided it was best for him to become a Mountaineer.

“After I signed and with the times that I posted, there were other schools, but with me being the athlete I was at the time, McLean was really the only coach that was able to trust me and invest in me,” Ballard said.

During his freshman season at App State, Ballard broke the 200-meter school record time twice and also contributed to school records in the 4×300 and 4×400-meter relay teams. Even with success, there were still some setbacks.

“He’s had a couple of little nagging injuries here and there, so he really hasn’t even blossomed yet, even in his third year here,” McLean said. “So, him and I are still waiting on him to really showcase what he naturally has, and then we’re going to build off of that.”

At the VMI Team Challenge earlier this year, Ballard posted two first place finishes; one in the 60-meter dash and one in the 200-meter dash. This performance earned him the Sun Belt men’s track athlete of the week award.

“I would say it’s a good start, but we’re just getting started in the season,” Ballard said. “I plan on having some bigger accolades than just athlete of the week, so I’m looking forward to the rest of the season.”

Even with a great start to the year, Ballard and McLean have larger goals and higher expectations.

“If you don’t set (the bar) high, then you’re not going to reach the lower levels,” McLean said. “So for him, I think he’s got a good chance at being one of the best in the Sun Belt.”

For now, Ballard is taking it one meet at a time, and McLean is confident in the junior sprinter.

“Even this weekend we (are) going to go out to New Mexico (to) compete against some really good competition,” McLean said. “Depending on how his competition is, I think he’s going to run really well.”

That weekend at the New Mexico Collegiate Classic on Feb. 7, Ballard performed just how his coach thought he would. In the 200-meter dash, he ran a time of 21.18 seconds, once again breaking the school record.

While there is still a lot of track left to run, Ballard continues to show how good he can be as the goals set before him become more and more realistic.