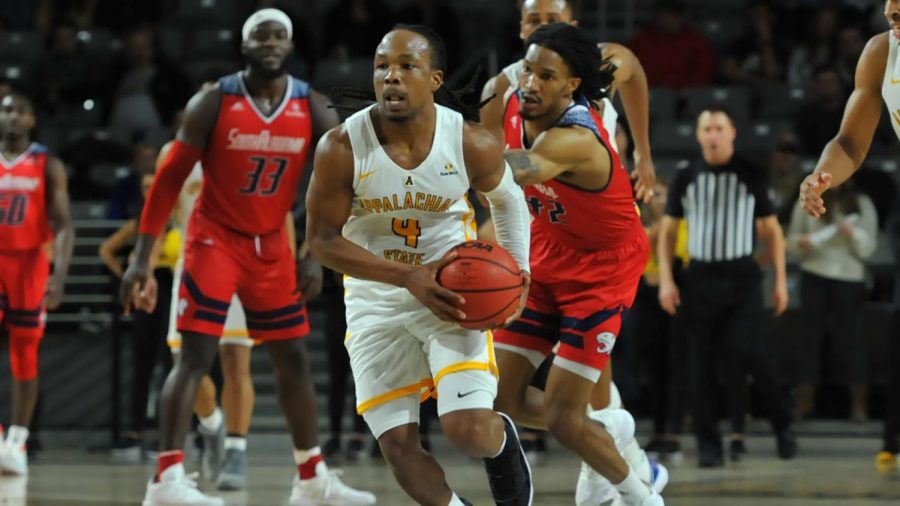 Senior guard O'Showen Williams tied a program record with 10 made three-pointers in App State's 78-70 loss against South Alabama on Feb. 20.

Senior guard O’Showen Williams led all scorers with 32 points and tied a program record with 10 three-pointers, but it wasn’t enough to overcome the App State’s struggles on offense against South Alabama.

“I’ve never been worried about my stats, I’ve just been trying to find ways to help the team win so … it doesn’t really matter I tied the three-point record,” Williams said.

Williams had a huge night, especially from three, but the team failed to make shots to win the game. Without Williams 10 three pointers, App State was 4-for-18 from three-point range and they couldn’t find a rhythm on the offensive end. In the first matchup between these two teams, which the Mountaineers won, they only took 19 threes compared to 38 in this contest.

“In our first game, we forced them to shoot 28 threes. We kept them out of the paint, and  they had 28 paint points in game one; tonight they had 42 and only shot 12 threes,” head coach Dustin Kerns said. “I’m disappointed in our man defense. They got downhill, they got to the paint way too much.”

Senior forward Josh Ajayi led the charge for the Jaguars with a team-high 19 points with most of his points coming from the paint or at the free-throw line. South Alabama went inside early and often, shooting 18 free throws compared to App State’s seven.

App State struggled to take the ball inside and get to the free-throw line and ended up shooting below 50% for the game, meanwhile South Alabama shot 69.8%.

Junior guard and leading scorer Justin Forrest had a tough night, shooting 1-for-13 and 0-for-8 from three. While Williams was able to step out and draw the defense, Forrest couldn’t get a shot to fall, so South Alabama was able to stay in their 2-3 zone and defend fluidly.

Coming in, both teams were tied with 9-7 records in conference play, and this game could help decide who gets a day off in the conference tournament.

“We can’t let tonight cost us Saturday, so we’ve gotta regroup tomorrow as we did last weekend, but they got a part to do with it too,” Kerns said. “I challenged them, and they’ve got a responsibility to group together, come together and be connected on the court, and I didn’t feel like that tonight.”

Coming off a tough loss for postseason seeding, the Mountaineers have a day off to get their minds right and ready to put together with two games left in the season.

App State continues the late-season push with a home game against Troy Feb. 22.