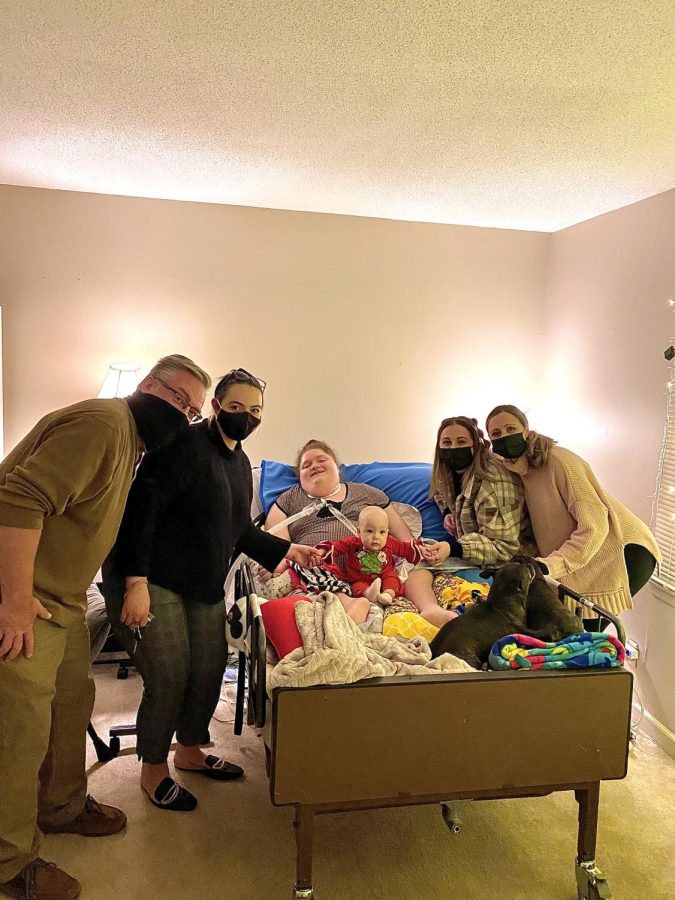 Courtesy of the Smithson family

The Smithson family gathered around Alexis for a photo, Dec. 23, 2021.

With the help of several communities, an App State student and her family brought Christmas cheer to a girl who lived in a hospital for nearly three years.

Grace Smithson, a senior psychology major, and her father, Miles Smithson, were at Brenner Children’s Hospital during the week of Thanksgiving for a family member. Upon their arrival, they noticed the room next to theirs was very large and already decorated for Christmas.

“We were wondering if the person that’s in there was going to be there for the holidays,” Miles Smithson said.

When the Smithsons asked the nurses about their neighbor, they found she was a 16-year-old girl named Alexis Ratcliff who is paralyzed from the neck down. She has no immediate family to care for her and lived in the same hospital for over two and a half years, according to nurses. The hospital staff became her makeshift family. Those that know Ratcliff describe her as extremely light-spirited, witty, strong and a huge App State fan.

After learning this, the Smithsons decided they wanted to deliver Christmas to her.

“The story of this little girl just touched my heart,” Miles Smithson said.

During their time in the hospital, the father-daughter duo found that Ratcliff loved movies and cooking shows, liked many genres of music and “loves to be pampered,” Grace Smithson said.

Miles Smithson said seeing how the hospital workers treated Ratcliff inspired him and his family to do as much as they could for the 16-year-old.

On Nov. 24, Miles Smithson posted on Facebook asking people if they would like to send Ratcliff Christmas cards.

The post led to 15 people donating cards. Miles Smithson said the outcome was not what he had wished for. Because of this, Grace Smithson shared the post on social media platforms, including on Facebook group Appalachian Classifieds.

“I knew as an App State student, that I had a pretty big platform to reach farther than just my community,” Grace Smithson said.

She said the responses were almost instantaneous from students. Some university organizations, such as the men’s rugby team, donated so Ratcliff could receive a variety of gifts, and many students donated money via Venmo.

“The App kids really showed how strong they were and how giving they were,” Miles Smithson said.

As people shared Ratcliff’s story, the post reached further than the Mountaineer community. Grace Smithson said members of a fraternity from UNC-Wilmington donated money. Students at Ledford Senior High School also made over 100 cards for Ratcliff. In total, the Smithsons received over 200 cards, around 60 wrapped gifts and roughly $250 from donors.

When Miles Smithson called Brenner Children’s Hospital to set up a delivery date, he was told that Ratcliff had moved out of the hospital with a foster mom.

Ratcliff said the transition from living in a hospital for so long to living in a home is a blessing and something she’s wanted for years.

Ashley Harrington fostered the 16-year-old after knowing her for around two years. Harrington said she met Ratcliff in a similar way to how the Smithsons met her — they were hospital room neighbors.

“Alexis is larger than life and is resilient,” Harrington said.

The Smithsons delivered the gifts and cards they bought and received Dec. 23.

“It was very sweet, and I was really surprised. I was really thankful and appreciative because I knew that they didn’t have to do that,” Ratcliff said. “I didn’t expect anything from anyone.”

The Smithsons said they want to stay friends with Ratcliff and be there for her whenever she needs help. Ratcliff said she and Grace Smithson are close now.

“I think that they are great people,” Ratcliff said.

The Smithsons also plan on getting resources lined up for Ratcliff so she can enjoy events such as football games at the university.

“We wanted to do whatever we could in our power to make her life a little bit better,” Miles Smithson said.

Harrington said it’s important for people to realize how fortunate they are and understand that helping and supporting others goes a long way.

“It was so special that somebody had heard her story, wanted to be involved and wanted to support her and her life experiences,” Harrington said.