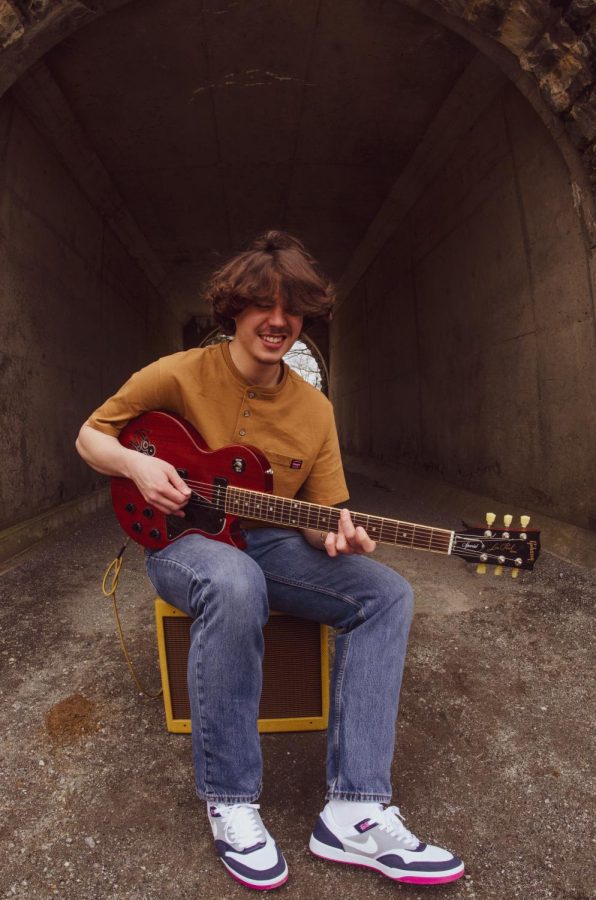 For most students, junior year is spent hitting the books and trying to figure out what’s next after graduation. But one App State student is managing all of that and more – including recording an album.

Innes worked with producer Doug Williams, who has worked with big North Carolina artists such as The Avett Brothers. The two started talking back last year after connecting on Instagram.

When Innes first booked time at Williams’ studio, he spent eight hours there recording his songs.

“I was really excited but also really nervous,” Innes said. “This was my first time I’ve ever paid for studio time.”

Innes said he experienced some anxiety while recording and felt doubtful after leaving the studio, but as he listens back to the tracks now, he feels it’s better than he originally thought.

“After spending eight hours in the studio, you don’t really feel euphoric about the art anymore,” Innes said.

Innes has been involved in music since he was little. From piano lessons to chorus, he made his way to music production.

“In middle school, me and my friend started making dubstep on this software on the computer,” Innes said. “That’s how I got into producing music.”

Innes also picked up the guitar in middle school, and when his parents gifted him an eight-track mixing console in high school, he dove into the music production world.

While Innes stuck with guitar, he did not stick with dubstep. His album “Taste The Tide” has an acoustic, singer-songwriter sound.

Innes has also performed in bands. He currently plays in 80 Unlacey, a Boone-based band.

While Innes is comforted by the opportunity to make music on his own, he enjoys having both a solo act and a band as music outlets. Innes said he also loves the connections and friendships that have come from the band.

Friend and fellow 80 Unlacey band member, Alvin Carlisle, has worked with Innes since 2019.

“Dylan is a great musician to work with. He’s very passionate about music,” Carlisle said. “He’s also an amazing songwriter.”

Innes’s album features an acoustic version of one of the most popular songs by 80 Unlacey, “Bristol.” The band wrote the song together and all got to contribute, Carlisle said.

Photographer Julia Lynn, who took pictures for the band and Innes in preparation for his album, said she enjoys working with Innes and likes his music.

“He has always been very nice and very generous,” Lynn said.

For the release of “Taste The Tide,” Innes is most excited for people to hear songs that he’s been holding on to for a long time or songs he’s played at shows.

Working in music has given Innes something to do. Whether it’s just sending music-related emails or writing songs, Innes is “never bored.”

“If nothing else were to come out of it, at least I have something to do every day,” Innes said.

Innes said songwriting and producing are his favorite aspects of working in music.

Sofie Pedersen, a fellow artist and App State student who works in the same recording program as Innes, has worked with him in the studio multiple times. Recently, the two put out a song together called “Clean Record,” featured on Pedersen’s EP, “I Killed Cupid.”