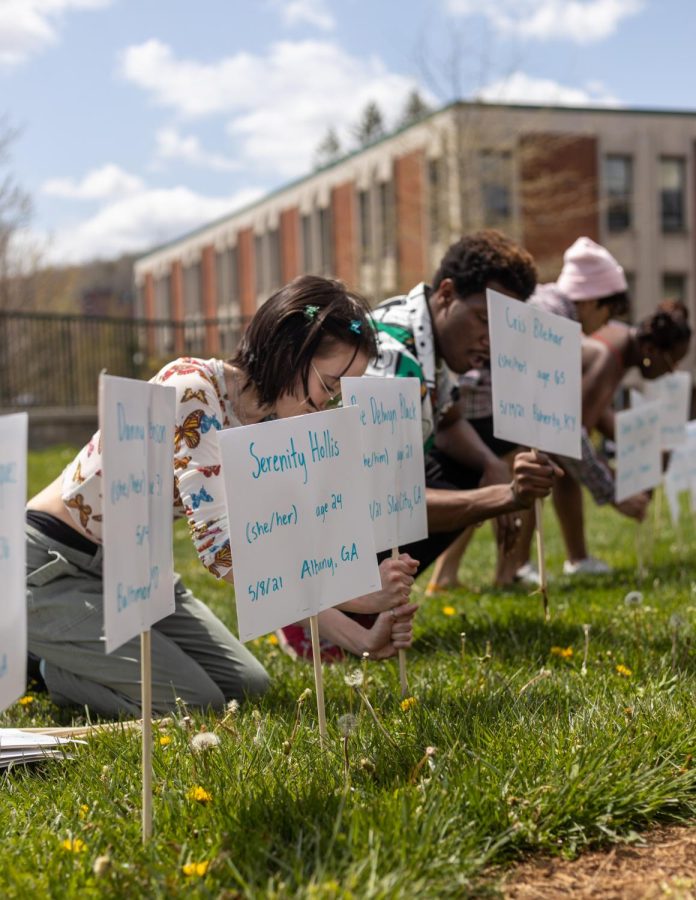 Sustainable development junior Faye Guarino and biology senior Justice Taylor put up signson Sanford Mall April 22, 2022, in memory of transgender people who have been killed in 2021.

App State students gathered on Sanford Mall Friday for an annual rally in honor of transgender lives lost in the past year.

“A lot of people here, especially, think if it’s not directly affecting them it doesn’t matter,” said Tea Critchfield, a junior music education major who led the event. “These were actual people.”

According to a PBS report, 2021 was marked as the “deadliest year on record” for the transgender community. This is due to the 45 homicides reported in the last year across the country, in addition to many anti-trans legislation in states such as Oklahoma, Iowa, Utah and Louisiana.

The Trans Day of Silence is a product from the Gay, Lesbian & Straight Education Network in recognition of the hardships faced by the LGBTQ+ community every April. Students around the country take a vow of silence throughout the day, ending with celebrations of queer life and culture. Students at App State, like Critchfield and others, believed this was an important event to unify the university.

At the rally, signs were placed around the area with the names of transgender individuals who have lost their lives in the past year.

“When you don’t identify with the majority, your life is in danger almost anywhere you go,” Critchfield said.

“I want to say I’m shocked, but the numbers just don’t shock me because, especially in America, there is a huge hate for members of the LGBTQ community,” McKoy said.

The sentiment of living in fear due to the high homicide rate was felt throughout many of those in attendance at the rally.

“This kind of thing happens every day. These people just go unseen and their stories go unheard in the news,” McKoy said. “I want to hear more about this.”

Critchfield believes conversations on trans lives are extremely important to have in classroom settings to ensure students are learning.

“The best way to get better is to learn,” Critchfield said. “We have a small, accepting community here, which makes it hard when there are so many people who are hateful of us in the surrounding area.”

Tori Ketchel, a sophomore interior design major, believes rallies like these will raise awareness for how trans people are treated and bring more attention to trans issues.

“I think it’s really going to inform people how many deaths have gone on,” Ketchel said. “There are so many deaths that have happened and I think it’s just good to be informed.”

Ariela Allen, a junior economics major, said events such as the Trans Day of Silence rally helps raise awareness and start conversations in support of the queer community in Boone.

“We can encourage folks with those diverse backgrounds to come to Appalachian State, knowing that there is infrastructure with support services there for them during their journey,” Allen said.

Critchfield listed names of 10 people who lost their lives since the start of 2022 and then led the group in a moment of silence for the individuals.

The rally also featured musical performances by guests as well as a drag show performance from Critchfield.

“Art is a universal language,” Critchfield said. “Being exposed to that kind of art opens your mind and your heart to a whole different community you might not have found otherwise.”

“With any community who advocates for change and advocates to be seen, the best thing we can do in the world of social media is to record things and put them out there,” Allen said.

Critchfield said they are sad remembering their youth and the lack of queer representation they saw in the media. However, they believe times are changing and their art is impacting their experience as a queer person.

“Being able to represent my community in this way is very important to me because I can be the representation for queer kids that I never had,” Critchfield said.