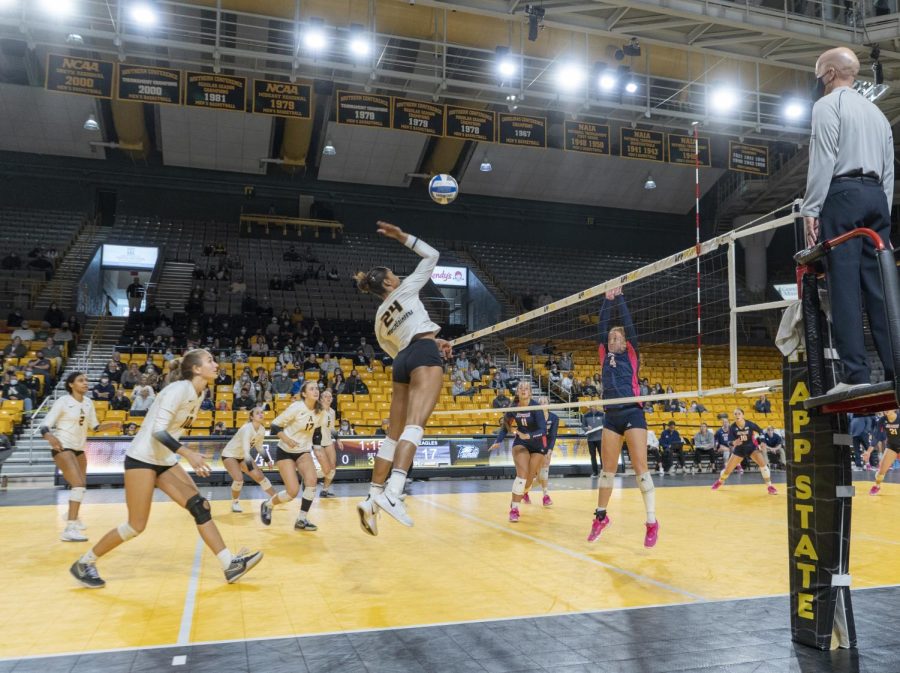 The team went under a drastic change earlier in the week as former head coach Matt Ginipro announced his resignation. Ginipro coached the team from 2007-21 and led the Mountaineers to the National Invitational Volleyball Championship in 2018.

“After 15 years with Appalachian State Volleyball, I have made the decision to step away from the program to pursue other volleyball and non-volleyball opportunities,” said Ginipro to App State Athletics. “Boone and App State will always hold a special place in my heart, and it has been amazing to be a part of the App Nation.”

Even through adversity, the Mountaineers still put up an impressive game. Two Mountaineers posted double digit kills in the sweep, with senior outside hitter Victoria Wilform and junior outside hitter McCall Denny both posting 12 kills. Senior middle blocker Daryn Armstrong followed close behind with eight. Junior setter Sam Bickley dished out 25 assists and defended the floor with seven digs. Emma Reilly posted a team-high 13 digs over the match.

“I think we really shocked ourselves with how we came out, especially with everything going on,” said freshman outside hitter Lulu Ambrose. “We decided we are not going to let anything outside of this affect us, except us.”

Bullock praised the team for how they came into this week with changes within the team.

“I mean, they are a great group,”  Bullock said. “They bought in really quick. They came to practice and worked hard. That is all you can really ask for.”

The crowd and bench were electric, making noise for the Black and Gold all game. Bullock highlighted the crowd, as the referees arrived late, forcing an hour and a half delay.

“I honestly thought it was a great time,” Bullock said. “We had a really great crowd battling through delays and time changes and things like that, and we still had the crowd we did. I can’t really ask more for my first experience”

As the team walked off the court for the final time, the crowd met them with a standing ovation.

“I’m really close with the seniors, so it is sad to see it end like this,” Ambrose said. “They were role models to me.”

The Mountaineers made a quick turn around, playing Coastal Carolina once again Nov. 14 in Conway, South Carolina. Bullock knew the Chanticleers would score points, but hope the team could go and play some of their best volleyball.

“It is all about our side and converting on our side and making sure that our offense stays consistent,” Bullock said.

The Black and Gold lost their final match in the season after four sets. One Mountaineer posted double-digit kills, with Denny leading the team with 11. Wilform followed right behind with nine. Bickley dished out 21 assists over the match. Reilly led the team in digs with a team-high 15 digs, while senior middle blocker Anna Kincaid protected the net with four blocks.

The team now looks toward the Sun Belt tournament starting Wednesday, Nov. 17. App State will travel to Foley, Alabama, as the sixth seed, preparing to play No. 3 seed Louisiana.

The Mountaineers played the Ragin Cajuns Oct. 15, with the team winning the match 3-1. The Mountaineers now hope for a repeat performance, as they must win every game to reach the Sun Belt Championship.