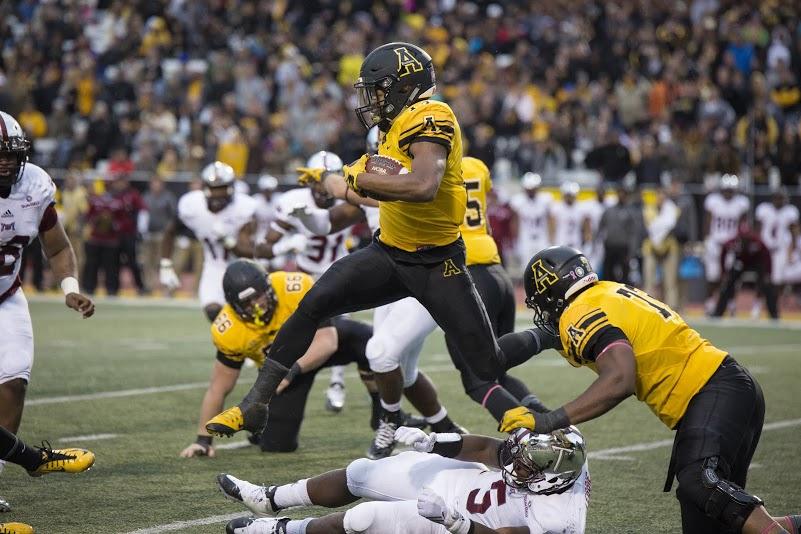 Although Troy’s record coming into the game was a mere 2-5, it was not indicative of their talent on the field. However, Troy’s first play of the game may have given a different impression.

Only 55 seconds into the game on third down, defensive end Ronald Blair saw the way the tackle set up deep and anticipated a screen.

“I felt it and the ball just came right to my hands and I just took off,” Blair said of his first career interception that resulted in a 30-yard pick six.

It appeared that things would remain the same for Troy, as the Mountaineers scored their fourth defensive touchdown of the season early in the first quarter off of Blair’s pick six. Troy’s second possession ended in a three and out, but the team rallied and managed to go 75 yards on seven plays in only 2:11 seconds on their next possession.

The Mountaineers offense kept having trouble working their way up the field a few times with penalties setting them back.

“We killed ourselves in penalties in those first two drives,” Lamb said.

Towards the end of the first quarter, the running game was reestablished as Marcus Cox opened up the drive with a 13-yard carry, which set up a 26-yard pass to Bobo Beathard. Lamb’s pass to Beathard helped lead to an 89-yard scoring drive and a pass to Simms McElfresh in the end zone to put the Mountaineers up 14-7 at the end of the first quarter.

App State came back onto the field for the second half expecting to have the first possession, as Troy won the coin toss and chose to receive to open the game. What they didn’t expect was an onside kick and recovery to give Troy the ball. The Trojans then proceeded to trick the Mountaineers by throwing a screen to wide receiver K.D. Edenfield, and he threw a 45-yard bomb to Jarvis Bently to put them at the 1-yard line. Quarterback Brandon Silvers was then able to punch it home to put a knot on the score at 17-17.

What could have been the deciding drive for the Mountaineers ended prematurely with an interception by Troy’s William Loyd to put the Trojans at their own 30-yard line with 11:50 left in the game. Troy proceeded to go 70 yards in 11 plays resulting in an 11-yard touchdown catch by Terry Ruben, which put the game into overtime.

It only took Troy, who had the first possession of overtime, five plays to manage the first score of overtime, utilizing their dual-threat of passing and running to penetrate the Mountaineers defense like it had done all game.

But the Mountaineers weren’t about to let the home crowd leave unsatisfied, as they responded with a five-play drive of their own

The Mountaineers regain possession after their scoring drive to continue the cycle of overtime, which resulted in a 38-field goal from senior kicker Zach Matics.

It was then Troy’s run of the playground again, as a Jed Solomon kicked a 34-yard field goal to keep the game tied at 41-41. As the Trojans regained the ball the next possession, their 20-yard drive was stopped dead in its tracks at fourth and two on the Appalachian State 5-yard line. The Trojans then took a timeout.

“We told our guys to watch any fake they might do,” Satterfield said.

Low and behold, the Trojans attempted a fake field goal with Steven Burns and Keenan Gilchrist making the tackle to give the Mountaineers a shot to win the game.

“Right when they snapped it everybody on the line got good penetration,” Burns said. “We had such good penetration I could actually see the pitch and so I just reacted to it.”

Six plays and 18 yards later, Matics kicked a 24-yard field goal to put this nail biter away and give the Mountaineers their seventh victory of the season.