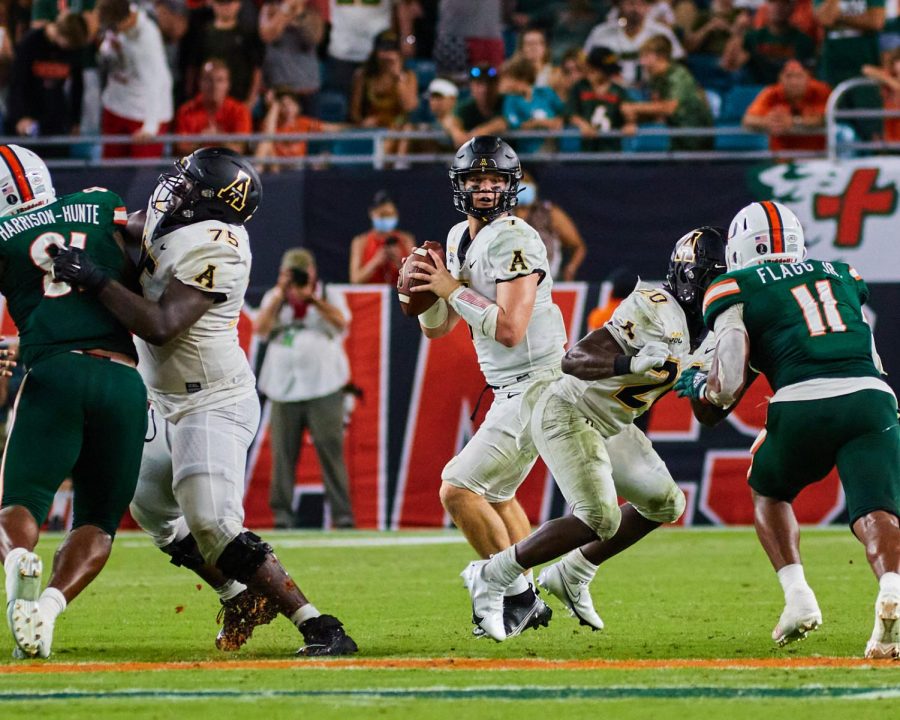 Chase Brice drops back to pass during a late-game drive against No. 22 Miami. Brice finished 21/34 passing for 199 yards and one touchdown in a heartbreaking loss at Hard Rock Stadium.

App State football went down to Hard Rock Stadium in Miami, Florida, and gave the No. 22 ranked Miami Hurricanes a fight till the final minute. The Mountaineers held the lead late in the fourth quarter but lost in a heartbreaker 25-23.

“Very proud of our effort. This is a gut-wrenching loss. One loss won’t define us, and we’ll learn from our mistakes,” App State head coach Shawn Clark said. “I love this team. They’re resilient. They fight to the very end, they really represent what App State Mountaineers are supposed to be.”

The Mountaineers began with the football after the Hurricanes deferred on the coin toss. Both teams started with quiet drives, trading punts with Miami punter Luo Hedley, who pinned App State on its own 2-yard line to begin the second drive.

On third down, graduate transfer quarterback Chase Brice threw a pass that was batted down at the line of scrimmage and intercepted by the Hurricanes. Starting at the 6-yard line, Miami running back Donald Chaney Jr. punched in the first score of the game, making it a 7-0 lead with just over nine minutes left in the first quarter.

Coming off the turnover, the Mountaineers responded, working down the field before facing a fourth down at the Miami 28. Clark and offensive coordinator Frank Ponce decided to go for the conversion. Junior running back Cam Peoples found the crease and galloped into the end zone to tie the game at seven points apiece.

The Mountaineers’ defense got a stop on the following drive, giving the offense the ball late in the first quarter. After a three-and-out, a high snap forced super senior punter Xavier Subotsch to scramble back to the ball and punch it out of the back of the end zone, giving the Hurricanes a safety for a 9-7 lead. Following the safety, App State’s defense stopped the bleeding by forcing the Miami offense to punt.

“We put them in a lot of situations on offense, and they fought to the very end. A lot of credit goes to our kids for never giving up,” Clark said.

The Hurricanes worked the ball down the field easily on their next drive on the hot hand of Miami quarterback D’Eriq King, who scrambled for a 29-yard gain in their first drive of the second quarter.

Miami running back Cam’Ron Harris hit the crease in the defense for a touchdown later in the drive, but an illegal formation penalty froze the momentum for the Hurricanes. Miami kicker Andres Borregalles extended the lead to five.

Super senior wide receiver Jalen Virgil fielded the kickoff after the Miami score, found the open lane and high-stepped by the last defender for a 100-yard touchdown return. The former track star gave the Mountaineers their first lead of the game at 14-12 with 6:07 left in the second quarter.

Miami wasted no time threatening on offense, moving into App State territory on their sixth drive of the game, aided by Mountaineers’ super senior defensive end Caleb Spurlin who committed an unsportsmanlike conduct penalty in App State territory. Borregales attempted a 35-yard field goal, and Spurlin made up for the foul by blocking the kick and silencing the Miami faithful.

App State’s defense forced another punt on Miami’s final drive of the half after the Hurricanes started on the 48. Senior linebacker T.D. Roof rushed off the edge on third down during the drive and sacked King,  forcing Miami deeper into their territory to punt.

The Mountaineers ran the clock out to end the half, with Peoples gaining a first down to make sure the Hurricanes didn’t see the ball again until the second half.

To start the second half, Miami didn’t hesitate to put more points on the board. In under 90 seconds, the Hurricanes assembled a 75-yard drive capped off by a 12-yard touchdown run from Harris. This put Miami back on top 19-14 with 13:32 left in the third quarter.

On the next drive, App State drove all the way to the 5-yard line. On second down, Brice failed to connect with super senior Mike Evans in the endzone, leaving Virgil stuffed at the line of scrimmage on third down. The Mountaineers settled for a 22-yard field goal from super senior kicker Chandler Staton to narrow the score to 19-17.

The score stalled at 19-17 until the 9:15 mark of the fourth quarter. Xavier Subotsch was forced to punt from the four-yard line, which after a 13-yard return, gave Miami the ball at the App State 33-yard line. King ran the ball to the 30-yard line, but the Mountaineer defense forced fourth down after that. Borregales drilled a 38-yard field goal to increase Miami’s lead to 22-17.

“He’s hard to contain,” Clark said. “There’s a few plays he breaks out and makes big plays. It’s hard to swallow, but that’s nothing but him being a great football player.”

App State responded with a scoring drive of its own. Brice went five for five on passes, including a 41-yard bomb to super senior wide receiver Malik Williams to the Miami 9-yard line. Brice hit Williams on the two plays after to give the Mountaineers a 3-yard touchdown. App State elected to go for the two-point conversion to make up for the two points lost from the safety, but a bad snap ended the attempt before it could get started. Despite the failed attempt, App State held on to a 23-22 lead with 5:48 to play.

“The throw to Malik, that was a design play,” Clark said. “He came open late and then went for two at the end, and it was a bad snap. I don’t know what happened. We’re not pointing fingers. It just didn’t work out.”

Miami constructed a 55-yard drive, putting the ball well into App State territory. While the Mountaineer defense forced fourth down for the Hurricanes, it wasn’t enough to keep them out of field goal range. Borregales hit the 43-yard field goal to give Miami a 25-23 lead.

With 2:04 left, the Mountaineers had to move quickly to have any shot at a game-winning score. Brice connected with super senior wide receiver Corey Sutton for a 15-yard completion to the 43-yard line, but that was where the positive plays ended. Sutton and Virgil dropped passes from Brice, and on fourth down, Sutton couldn’t corral a pass, and the ball went back to the Hurricanes. Miami ran the clock out, securing the 25-23 win.

“They played their hearts out,” Clark said. “We got beat. We’ll go back and look at our mistakes. Our guys will learn from this. We’ll learn as coaches, and this team is going to be very good this year.”

Brice finished with 199 yards and one touchdown on 21-34 passing, and Peoples led the way on the ground with 95 yards and a touchdown. Senior linebacker D’Marco Jackson recorded 10 tackles to lead the defensive effort.