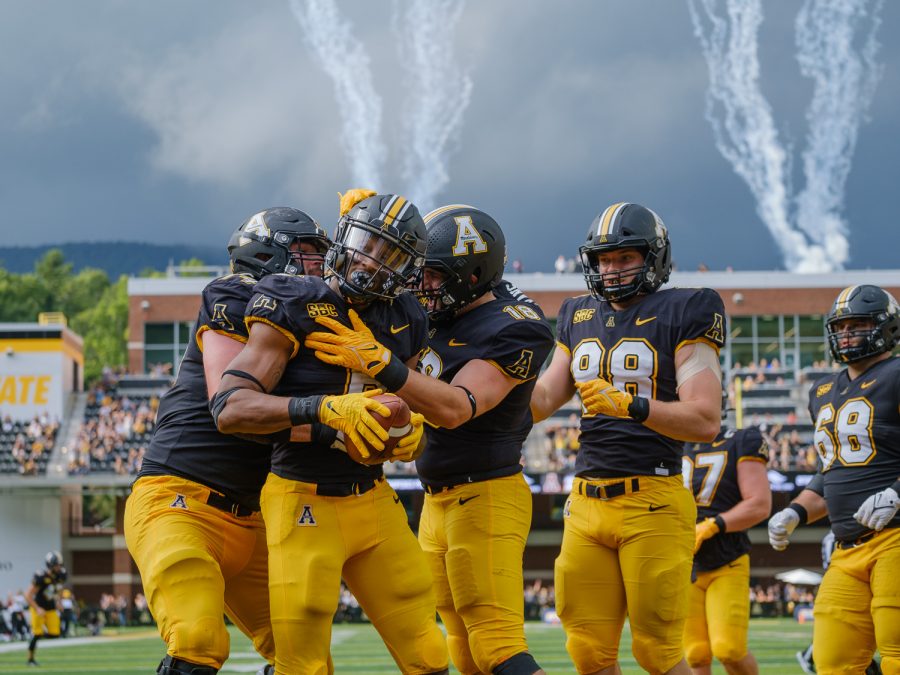 Junior running back Cam Peoples celebrates his second touchdown of the day with his offensive line. Peoples found the end zone twice on 11 carries in the 2021 home opener vs Elon.

The Mountaineers played the Elon Phoenix in its home opener of the 2021 season, winning comfortably 44-10. App State put on a show with 528 yards of total offense in front of a sold out crowd at Kidd Brewer Stadium.

“I just want to say thank you to the fans. I think the fans were a big part of today and helping us get over the hump,” App State head coach Shawn Clark said. “It was exciting coming back to The Rock.”

The Elon Phoenix started with the football after winning the coin toss, and its first drive ended in a punt. On the second play of the possession for App State, graduate transfer quarterback Chase Brice launched a 50-yard pass to super senior wide receiver Malik Williams. On third down, Brice connected with super senior wide receiver Corey Sutton for a 28-yard completion, which ended in a fumble on the goal line.

Elon failed to capitalize on its defensive stop, giving the ball right back to the Mountaineers. Brice started off the drive with a 26-yard completion to Sutton. Two plays later, Brice fired a 47-yard touchdown pass to Williams, giving the Mountaineers a 7-0 lead with 5:24 remaining in the first quarter.

The Mountaineers started the second quarter with a field goal of their own, as super senior kicker Chandler Staton drilled a 44-yard kick through the uprights, giving App State a 7-point lead with 12:41 left in the half.

“Our defensive line creates a lot of havoc,” Jackson said. “They’re all over the place, and they get the quarterback out of the box.”

Early in the third quarter, the Mountaineers faced a fourth down later in the drive on Elon’s own 8-yard line. Sophomore running back Nate Noel found a gap up the middle, rushing for five yards and successfully converting a first down. Brice ran into the end zone shortly after on a one-yard touchdown run, giving App State a 20-3 lead with 8:29 to go in the third quarter.

On the following drive, Elon quarterback Davis Cheek fired a pass into the end zone on the App State 9-yard line that senior linebacker T.D. Roof intercepted and returned 90 yards to the Elon 5-yard line.

“Every blind squirrel finds a nut once in a while,” Roof said.

“I knew if he ever got his chance, he would really succeed,” Clark added.

Junior running back Cam Peoples ended the drive on a 1-yard rushing touchdown, giving App State a 24-point lead with 5:58 left in the third quarter.

Following a Brice fumble, Elon took advantage of the quality field position, where running back McKinley Witherspoon found the end zone on a 2-yard carry. Elon cut the lead to 17 with 47 seconds left in the third quarter.

App State re-established their 24-point lead in a matter of minutes. Peoples proceeded to take over the drive, rushing for 41 of the 50 yards, including a break-off 18-yard touchdown run down the sideline.

With 8:26 to go in the game, super senior quarterback Jacob Huesman entered the game. Huesman put together a 56-yard drive resulting in a 28-yard field goal completion, extending the Mountaineers’ lead to 27.

On the final drive of the game, sophomore running back Anderson Castle plowed his way into the end zone on an 8-yard rushing touchdown with 39 seconds left in the game, capping off an incredible offensive day for the Mountaineers.

App State secured the win with a final score of 44-10. On the offensive side, Brice completed 19-25 of his passes for 293 yards and one touchdown, including one on the ground. The two-headed monster running back duo between Noel and Peoples got the job done on the ground with a combined 159 yards and two rushing touchdowns.

Wide receivers Sutton and Williams beat up the Elon secondary for a whopping 251 combined receiving yards. Jackson led the defense with a valiant effort, recording 13 total tackles, three sacks, and 4.5 tackles for loss. Jackson is the first player in the FBS since 2014 with that stat line.

“I’m proud of our guys for winning,” Clark said. “They take what the score is to the record book. We’re 2-1, and we’re ready to play a C-USA team in Marshall. We have to go back and prepare tomorrow and be ready to go out there.”

The Mountaineers have a short turnaround this week, facing Marshall Sept. 23 at 7:30 p.m. in Kidd Brewer Stadium.