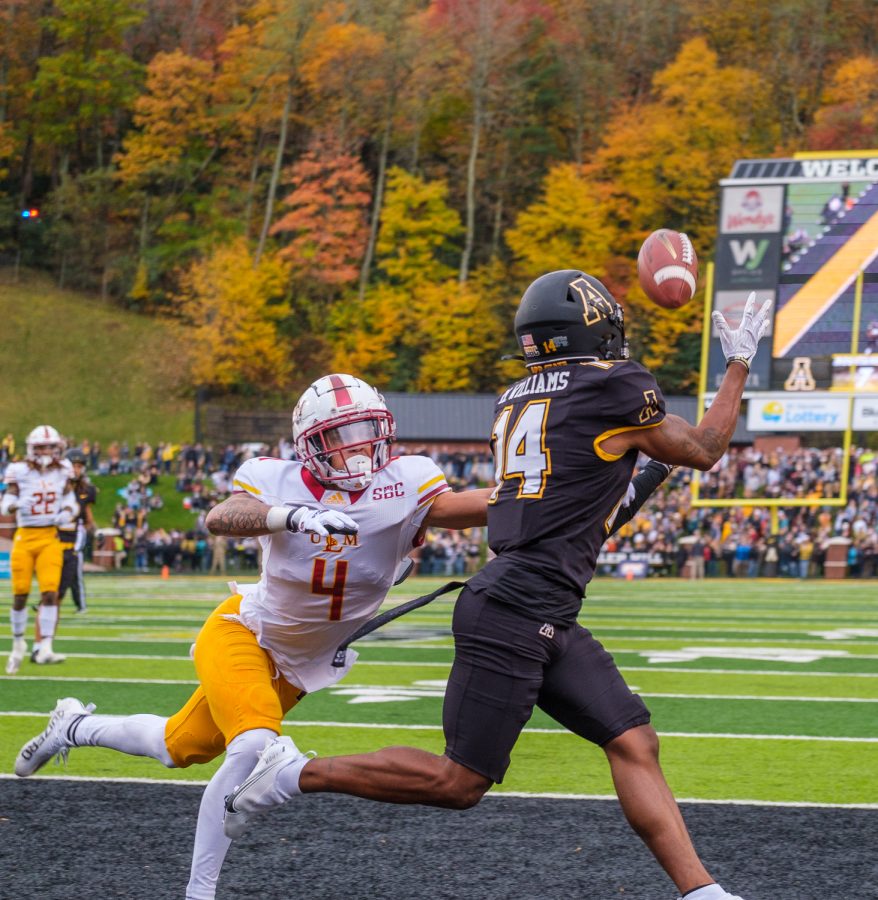 App State defeated the University of Louisiana at Monroe 59-28 in its annual homecoming game Saturday to become bowl-eligible for the seventh straight year.

“All week long, the message has been … ‘we have to play our very best.’ You can’t ask your teammates to play their best if you’re not playing your best,” head coach Shawn Clark said. “Today in the first half, our whole team played their very best, and it was a great team win.”

The Mountaineers dominated the first quarter 21-0, racking up 149 more yards and almost eight more minutes of possession time than the Warhawks. App State’s defense gave up just 34 total yards, including a single completion for one yard in the first quarter.

The Black and Gold continued its early onslaught, extending its lead to 49-7 by halftime. With 39 seconds left in the second quarter, graduate quarterback Chase Brice found super senior receiver Corey Sutton streaking to the back right of the South end zone for a 14-yard touchdown pass. Brice was forced to throw against his momentum after rolling out left to deceive the defense.

“It seems like in the second half, we’ve always picked it up, but that first half, we’ve either come out flat or just missed something barely,” Brice said. “But today, really coming out with a lot of juice, a lot of excitement and connecting on some plays.”

App State totaled 364 yards in 54 first half plays. In contrast, the Warhawks ran 28 plays for 88 total yards. On the last play before the break, senior defensive back Steven Jones Jr. picked off a ULM screen pass in stride, sprinting 14 yards into the end zone.

“A big thing for us has been trying to create turnovers, create big plays defensively,” senior linebacker Trey Cobb said. “I feel like this game is just a glimpse of what we can really do.”

ULM entered the game plus-eight in turnover margin, which was top 10 in the country. By halftime, the Mountaineers cut the Warhawks’ season-long turnover differential in half and finished the game with five forced turnovers.

“Probably the biggest thing is our defensive line got some rush today and made them throw the football,” Clark said. “It was a big momentum swing for our team.”

“He’s so short nobody can see him, so we’re fortunate to throw a little ball in the flat, and he sneaks out there and catches a touchdown, and everybody loves him,” Clark said. “Really happy for Caleb because he is a true Mountaineer.”

Sophomore running back Nate Noel scored the lone second half touchdown for the Black and Gold. In a three-play drive that lasted 1:09, Noel ran all three plays for 50 yards and a score, reaching the 100-yard rushing mark for the third time this season.

App State elected to go for it on six fourth downs, all in the first half, capitalizing on four of them. All year, Clark has felt comfortable leaving his offense out on fourth down, relying on his defense if the offense fails to convert.

Cobb led the Mountaineer defense with 12 tackles and one interception. He also made a crucial stop on a ULM fourth down, bringing the quarterback down just before the line to gain. Jones Jr. and senior defensive back Ryan Huff also came away with an interception, while senior linebacker T.D. Roof posted nine tackles and forced one fumble.

“Turnovers were the biggest part of the game, I thought,” Brice said. “Giving us a short field and ways to score the ball.”

Following what Brice considered one of his best games ever, the graduate transfer threw for 256 yards and four touchdowns. Peoples and Noel split 34 carries evenly, Peoples going for 82 yards and two touchdowns. Noel added 132 yards and one touchdown to his conference-leading rushing total.

“He deserves every bit of that. The way he comes in here and works,” Sutton said of Hennigan. “We knew before the game he was going to get it today. It was just a real special moment.”

App State travels to Jonesboro, Arkansas, Nov. 6 to take on the 1-6 Red Wolves of Arkansas State. ESPN+ will broadcast the game live at 2 p.m.