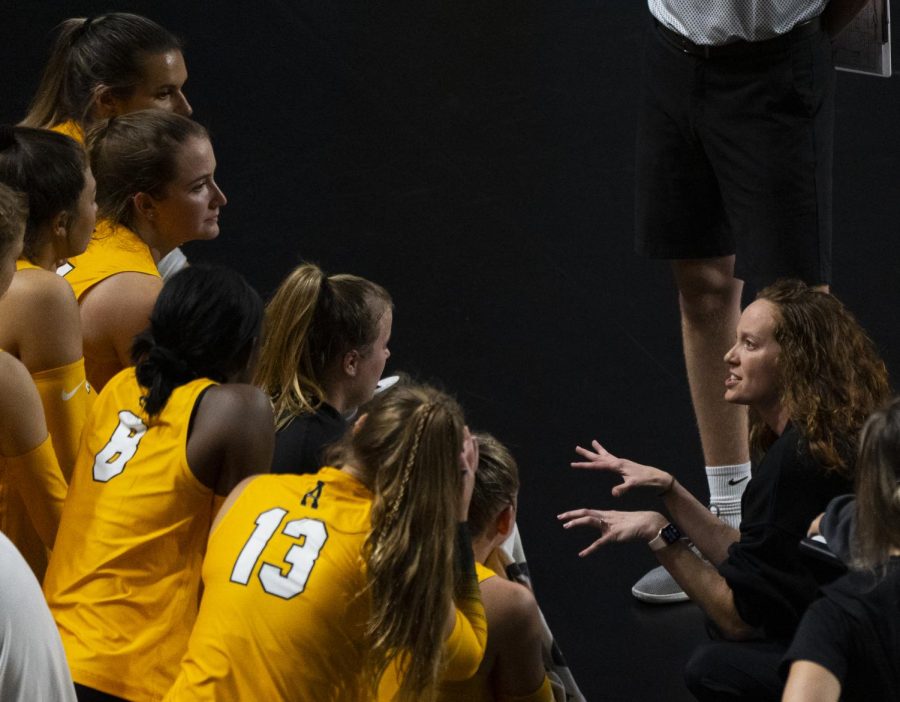 The Hall of Fame. The name alone creates a title of greatness for anyone who is qualified to enter it. For App State’s new head coach Sarah Rumely Noble, that is just one of her many accolades earned from her decorated playing career for the Kentucky Wildcats from 2006-09. Rumely Noble was inducted into the UK Athletics Hall of Fame in 2017 with fellow Wildcat athletes Randall Cobb and John Wall.

“It was unbelievable and really humbling just to be a volleyball player entering the Hall of Fame,” Rumely Noble said. “The university as a whole was really excited about volleyball and excited to honor somebody who had helped lay the foundation.”

Rumely Noble played a large role in turning Kentucky into the powerhouse it is now. Joining a 3-13 Kentucky team coached under a new Craig Skinner, Rumely Noble came in as a starter, made an immediate impact winning, SEC Freshman of the Year in 2006.

“When you’re going into a program and you’re fighting to build something, every day you gotta fight for it and you have to work hard,” Rumely Noble said. “I really just bought into that vision of wanting to go build something and make something really special.”

After winning SEC Freshman of the Year, Rumely Noble continued to improve as a player. She began to live for volleyball, practicing hard every day not only to make herself better, but to improve the team too.

“There was never a day that went by that I was like, ‘Oh my gosh, I have to go to practice today,” Rumely Noble said. “Practice became my championship. That is where my confidence came from was knowing when I stepped onto a court, I had outworked the people around me.”

The Wildcats became dominant with Rumely Noble at the helm. She directed the team to four straight NCAA Tournament appearances, making it as far as the Sweet 16 her senior year. In 2008, Rumely Noble had her best year as a player, winning the SEC Player of the Year.

“Sarah was a major reason why Kentucky became a national name in the sport of volleyball,” Skinner said. “I have no doubt she will do great things at the helm of App State volleyball.”

When Rumely Noble graduated from Kentucky, she left as one of the most dominant players in program history. She left the program as the all-time leading setter and sixth all-time in the SEC with 5,703 assists. She also leads the Wildcats program in service aces with 165. Rumely Noble was a four-time All-SEC setter, making two SEC first teams and a second team with the Wildcats.

After her time with Kentucky, Rumely Noble spent time overseas playing in the top professional division in France, Ligue 1, where she was the starting setter for Nantes Volley Feminin from 2010-11.

“Getting to play in a different culture has shaped me,” Rumely Noble said. “I have definitely learned from the coaches and the style they do over there and taken bits and pieces from it to shape some parts of me.”

“As I figured out who I was and how volleyball shaped that, I wanted to be able to pay that forward to the athletes that I got to coach,” Rumely Noble said. “Ultimately, that is why I wanted to get into coaching.”

Rumely Noble began her coaching career in 2011, traveling to North Texas University to become an assistant coach. There, Rumely Noble coached setters and coordinated the offense, leading North Texas to a high 26 wins during its 2012 season.

Rumely Noble would make her return to the SEC as a coach in 2015, traveling to Arkansas University to become an assistant coach and recruiting coordinator. There, she spent two seasons with the Razorbacks, directing the offense in 2015 and the defense in 2016.

Rumely Noble found a more permanent home at Louisiana State University, where she spent five seasons as an assistant coach and recruiting coordinator. There she is credited for bringing in nationally ranked recruiting classes for the Tigers. She also helped the Tigers to the NCAA Tournament in 2017, while coaching two freshmen to All-SEC first team selections.

In her final season with the Tigers, Rumely Noble was named an associate head coach for the first time. From there, she would never look back, making plans about the day that she would eventually coach a team.

“I have worked really hard in my career to make sure I was making the right moves professionally, to be around the right coaches that would work to develop me,” Rumely Noble said. “I am ready to go do this. I’m ready to make this my own.”

“All three of our coaches are really good,” senior McCall Denny said. “I think all three of them bring something different to the table, and I think the team has a lot of trust in them.”

Coach Zimmick was hired by Rumley Noble to join the Mountaineers shortly after she was named head coach. Zimmick comes to App State with an impressive coaching resume, acting as an assistant to both Kelly Sheffield of Wisconsin and Craig Skinner of Kentucky. During his time at Wisconsin, Zimmick would help coach the Badgers’ advance to the finals in 2015 and semifinals in 2016. Zimmick would then go to Kentucky as a graduate assistant, helping the Wildcats program to SEC titles in both 2018 and 2019. Zimmick was hired by Butler as an assistant coach following Kentucky, spending the previous two years there.

“This opportunity to go to a program that was just sort of starting over and sort of at the bottom and we are trying to take to the top, that was just really intriguing to me,” Zimmick said.

Rumely Noble also hired Chanelle Hargreaves in February completing her coaching hirings. During her time as a player, Hargreaves was a four-year defensive specialist at Florida from 2016-19. In her four seasons, she helped the Gators win three SEC titles and appear in the NCAA Tournament in all four seasons she played.

“Our staff really balances each other out in a skill perspective,” Rumely Noble said. “The energy we bring as a collective carries out into our team and into our program, and the girls are going to emulate that.”
As a coach, Rumely Noble is committed to App State volleyball and its players. Upon being hired, she did a statistical analysis of the Sun Belt to look into how the team could improve. She then immediately started working with the team, making the necessary changes she saw needed to happen to help the team return to their winning ways.

“We came in on the first day and we all had brand new serves,” Denny said. “She lined us up in lines and said this is how we are going to serve, and we all started straight from scratch like we never served before.”

This wasn’t the only change Rumely Noble instilled upon entering as a head coach, she has also kept her same ideas about practice. Rumely Noble welcomes competitiveness and high energy in her practices, with the team always moving at game speed.

“Effort is never questioned with the new coaches,” Denny said. “We are always going, people are running into walls, running into poles, it’s a really good effort, it’s always 100% in here.”

Now with the season closing in, Rumely Noble is ready to make her debut as a head coach. Making big goals earlier this year, Rumely Noble is hoping to not only begin rebuilding the program, but “push the top half of the Sun Belt.”

“I am excited to see this group of 17 and just the team that we become throughout the year,” Rumely Noble said.