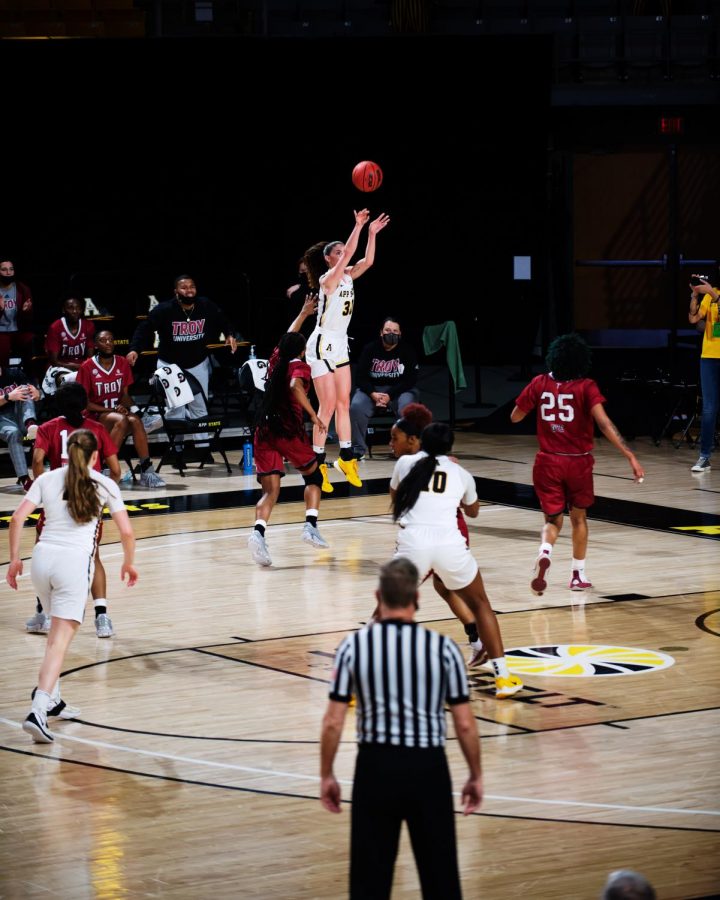 App State women’s basketball took on the Troy Trojans this weekend in a two-game series in Boone. The Trojans entered the weekend on a five game winning streak and a 5-1 conference record, good for first in the Sun Belt. Their only loss came at the hands of the Mountaineers earlier in the season.

“Throughout the second quarter we had two of our players get in foul trouble,” head coach Angel Elderkin said. “We had some different lineups in there and you could see Troy slowly gain control of the game.”

Midway through the second quarter, Troy began to push the pace on both sides of the ball, allowing the Trojans to grab momentum of the game. As the first half ended, App State freshman guard Faith Alston hit a halfcourt shot to cut the Trojan lead to 6heading into the break.

“We came out at half and their zone really bothered us,” Elderkin said. “As you can see by the stats, we took a lot of (3 pointers) and we didn’t make them.”

The Trojans led the game in rebounding and forced the Mountaineers to turn the ball over 22 times. App State held Trojan forward Alexus Dye to only 10 points while shooting 40%. Dye was on the NCAA starting five of the week, the week of January 24 along with senior Mountaineer Pre Stanley. Dye is the team leader in points averaging 16.5 points per game.

“We’ve got to try to turn this around for tomorrow, be better on the boards if we’re going to miss that many shots,” Elderkin said. “We’re a way better offensive rebounding team, to only get seven and average 13 is unacceptable.”

However, the second contest of the weekend unfolded similarly to the first. The Mountaineers fell again to the Trojans 74-52.

App State held tight through much of the first quarter, but a scoring drought began at the 3:11 mark and lasted for over eight minutes. Troy went on a 14-0 run in that frame and quickly stretched their point lead to 15.

The lead proved to be too much for the Mountaineers to overcome as they never claw within single digits.

“We just had a weekend where we just didn’t play our best, and I think in order to beat the best, we were going to have to be sharp,” Elderkin said.

Pre Stanley struggled all weekend against the Trojans, totaling just 13 points and two assists while turning the ball over 10 times. The senior guard came off of back-to-back 26 and 29-point performances against Georgia State the week prior.

“I just think they kept throwing multiple defenders at her, and when she would get past the first one, they would bring another,” Elderkin said. “They had a high awareness on her … I think their key was ‘Hey, we’re not going to let Pre Stanley beat us.’”

Now, after the weekend series, the Mountaineers sit firmly at third in the Sun Belt east division with eight games remaining.

“Like I said, there’s not many games left,” Gosnell said. “These last eight are really important to us, so each game we have to take very seriously and lock into the game plan.”

App State (8-8, 5-5 SBC) stays home to take on Georgia State (7-6, 3-3 SBC) next weekend in another two-game series. The first contest will be played Friday at 6 p.m. and the second will be played Saturday at 4 p.m. Both games will take place in the Holmes Convocation Center and can be viewed live on ESPN+.