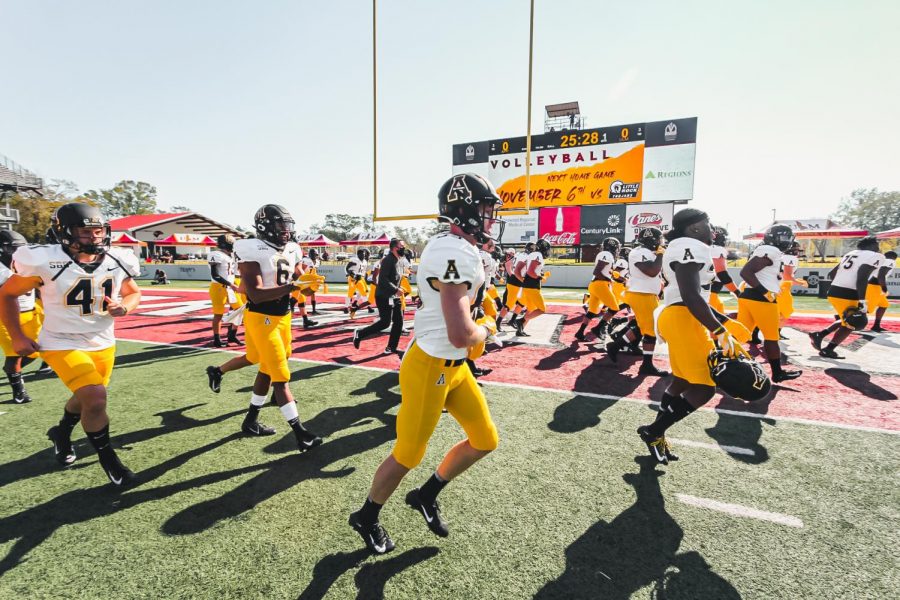 App State picked up it's first road win of the year and moved to 2-0 in Sun Belt play with a 31-13 win over ULM Saturday.

App State traveled to Monroe, Louisiana on Saturday to take on the Warhawks of ULM. Coming into the game, App State was 3-1, and ULM was 0-6. The Warhawks also had not led in a game at all this season. The Mountaineers handled business, picking up their first road win of the year and moving to 2-0 in Sun Belt play.

Senior quarterback Zac Thomas finished the game with 152 passing yards, two touchdowns and led all rushers with 109 yards. This is the first time in his career he has passed and rushed for 100+ yards in the same game.

Thomas said the ULM defense blitzed often throughout the game, leaving holes for him to tuck the bull and pick up chunks of yards on the ground.

“There (were) many times where I had guys open, but at the same time, I knew I could get 10 yards and the first down, and so I was gonna get it, get down, and just keep the game rolling,” Thomas said.

It’s the second straight week Thomas has set a career high in rushing yards after picking up 82 yards in the win over Arkansas State.

“We go to our read option game, and he could have rushed probably for 200 (yards) the way they were playing us,” head coach Shawn Clark said.

The Mountaineers elected to kick to start the game, and the App State defense forced a quick three and out, getting the ball to the offense less than a minute into the game. When App State got the ball, it was junior Daetrich Harrington who once again got the start at running back. Harrington had a 19-yard run to put the Mountaineers in ULM territory. Two plays later, Thomas looked to the endzone on a pass to redshirt freshman Christian Wells, but the pass was intercepted by ULM.

The Mountaineer defense quickly recovered and once again forced ULM to punt. On the next drive, App State marched 80 yards down the field to set up a one-yard rushing touchdown for sophomore running back Camerun Peoples to put the Mountaineers up 7-0.

After the App State defense forced another quick three-and-out, the offense wasted no time getting back into the end zone. Senior running back Marcus Williams Jr. ran the ball for six yards on first before exploding for a 48-yard touchdown on the next play. This gave App State a 14-0 lead.

ULM managed to bounce back and find the end zone on a long 17-play, 76-yard drive that took nearly nine minutes off the clock. ULM running back Perry Carter ran it in from two yards out to reduce App State’s lead to 14-7.

The Mountaineers responded on the next drive with another touchdown of their own. At the ULM 37 yard line, Thomas handed the ball off to Harrington who pitched back to Thomas. Thomas then aired it out to Wells, who caught the ball in the end zone between two defenders, giving App State a 21-7 advantage with 5:24 left in the first half.

On ULM’s next drive, the Warhawks tried a trick play to put them in scoring distance. Quarterback Colby Suits threw a pass behind the line of scrimmage to ULM tight end Josh Pederson who then threw a deep ball near the end zone. This would have put the Warhawks in position to score, but senior cornerback Shemar Jean-Charles never gave up on the play and punched the ball out, saving a big gain. Coming into this game, Jean-Charles led the nation with nine pass breakups on the year.

App State had one more chance to score before halftime, and marched all the way down to the ULM two yard line and used its last timeout with 17 seconds to play. Thomas ran the ball on the next play but lost one yard. The clock continued to run, and the Mountaineers were lined up to spike the ball and set up a field goal try, but a ULM player picked the ball up and ran with it. The officials could not spot the ball in time and time expired, forcing App State to settle with a 21-7 lead heading into the half.

The Mountaineers opened the half with a quick five-play, 65-yard scoring drive, resulting in a 35-yard touchdown connection between Thomas and senior receiver Malik Williams. Senior kicker Chandler Staton knocked through his fourth extra point of the day to go up 28-7 on the Warhawks.

ULM’s ensuing possession lasted just two plays after junior defensive back Ryan Huff brought down his second interception of the year. App State took over at its own 34-yard line with 12:28 remaining in the quarter.

App State marched 46 yards down the field into ULM territory, rushing the ball on almost every play. With a fourth-and-one on the ULM 20-yard line, Peoples tripped over a lineman and came up just short, turning the ball over on downs.

The Mountaineers’ defense forced another quick drive and interception after the Warhawks took over on downs. Junior linebacker Trey Cobb tipped a pass into the air and sophomore linebacker Brendan Harrington snatched up the ball inches away from the turf. ULM’s opening two drives of the half combined for five plays, 69 seconds and two turnovers.

Both teams punted on their next drives and App State entered the fourth quarter with a 28-7 lead and the ball.

App State reached the ULM 21-yard line before the drive stalled, setting Staton up to attempt a 38-yard field goal. The Georgia native drilled his first attempt of the day and the Mountaineers took a 31-7 lead with 13:13 to go.

ULM’s fourth drive of the half was cut short by another interception by Huff, who was able to drag one foot inbounds before falling out. Huff came into the contest with one career interception, which came against Marshall earlier this season.

The Mountaineers effectively put the game to bed with a 14-play drive that ate up 8:29 off of the clock. Freshman running backs Nate Noel and Anderson Castle each got some action in the run game towards the end, combining for 13 yards on seven rushes. With 2:38 remaining, Staton missed a 43-yard field goal to cap off the drive.

ULM put together a 74-yard drive in the final 2:38 and punched in a touchdown as time expired.

Marcus Williams led the running backs with 103 yards and a touchdown, including a 48-yard touchdown dash in the first quarter. Peoples finished with 52 yards and one touchdown, and Harrington finished with 44 yards on 11 attempts after starting the game for the Mountaineers.

Malik Williams led all receivers with 60 yards and a touchdown. Wells finished with one catch, a 37-yard touchdown grab, while senior receiver Thomas Hennigan had two catches for 26 yards.

The Mountaineer defense forced three interceptions in the game, two of which were at the hands of junior defensive back Ryan Huff. Sophomore linebacker Brendan Harrington had the other, his second of the year.

“I think, defensively, we had a heck of a game,” Thomas said. “They showed up today and they did their job, what they’re supposed to do.”

Next week, App State travels to San Marcos, Texas to take on Texas State. Kickoff is set for 3:30 p.m. and the game will air on ESPN+.