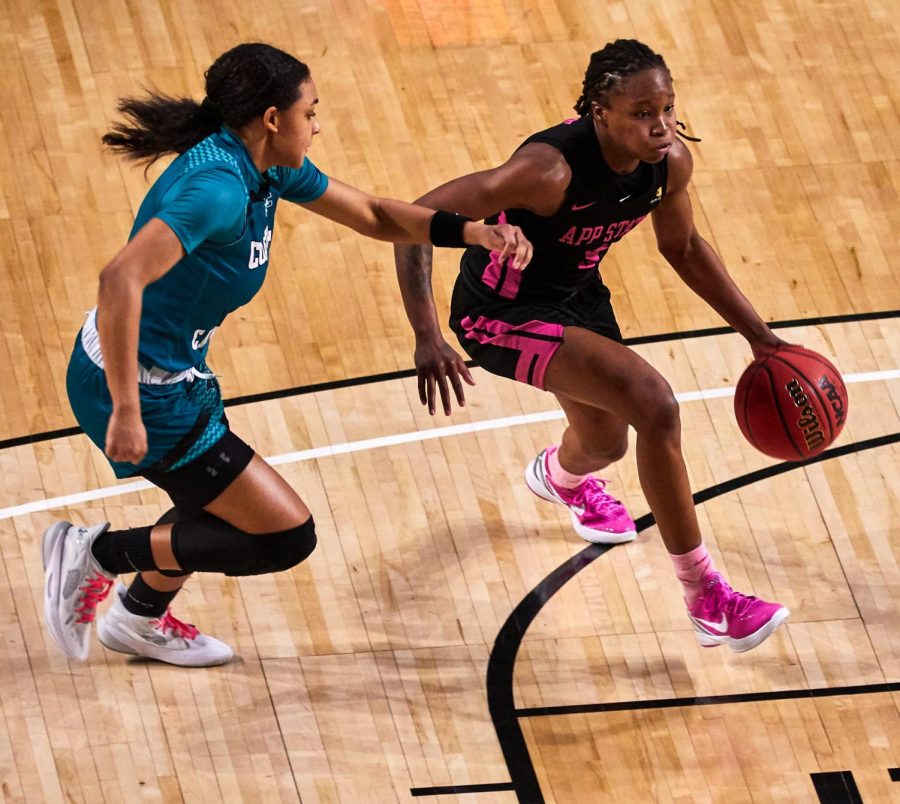 App State senior guard Pre Stanley gets in the lane during the Mountaineers' 79-65 victory over Coastal Carolina Saturday in Boone. The win was App State's second straight against Coastal Carolina, after knocking off the Chanticleers 72-58 Wednesday in Conway, South Carolina.

“I’m really proud of our team for getting back on track after our fourth straight loss,” head coach Angel Elderkin said. “It was really important for us to diagnose what we needed to (do) and how we needed to do it, and I thought our players bounced back and responded.”

The game started off even, as the lead changed hands multiple times in the first quarter. With less than three minutes remaining in the period, the Chanticleers held a 10-9 lead. The Mountaineers took a 12-10 lead after a 3-pointer from junior guard Brooke Bigott and did not give up their lead for the rest of the game.

Redshirt junior guard Tierra Wilson led the App State offense in the opening quarter with 6 points from a pair of 3-pointers. A buzzer-beating layup from redshirt sophomore guard Janay Sanders gave the Mountaineers a 17-12 advantage to close the quarter.

Senior guard Pre Stanley found her rhythm in the second quarter, hitting her first four field goals in the game. Senior guard Michaela Porter dominated on the defensive end, racking up three steals and contributing 6 points in the quarter.

The Mountaineers, at one point, got out to a 15-point advantage after a steal and layup from Stanley with less than four minutes in the half. App State went into halftime with a 40-28 lead on 50% shooting from the field and five made 3-pointers.

Stanley filled the first half box score with 9 points and seven rebounds. Senior forward Lainey Gosnell contributed a pair of 3-pointers, also totaling 9 points in the half.

Coastal Carolina came out rumbling in the second half, outscoring App State 10-2 and cutting the lead to just 4 points with less than seven minutes left in the period. Chanticleer guard Deaja Richardson kept the Chanticleers in striking distance, adding 20 points in the second half and finishing with 27 in the game.

“They were doing everything we were asking them to do; Coastal was just making a run,” Elderkin said. “What’s great about our group is that they are fully about evolving into a player-led team, so when we go into the timeout, they know what’s expected.”

From there, App State found its momentum, eventually getting out to a 19-point advantage with less than four minutes left in the game and holding on for a 79-65 victory.

Wilson added three 3-pointers in the fourth quarter, finishing five for eight on the night for a total of 15 points. She recognized the mentality she had to maintain when firing at such a high rate.

“I was just thinking about shooting with confidence every time,” Wilson said. “Even if it doesn’t go in, continue to keep shooting and it’ll go in.”

Gosnell led the team with 16 points, contributing three makes from beyond the arc. Porter finished with 14 points while racking up four steals on the defensive end, and Stanley contributed 14 points and a team-high eight rebounds.

“All year, we’ve talked about how our defense ignites our offense,” Porter said. “If we can pressure the ball, get steals and deflections to set the tone early in the game, our offense will come easy to us.”

App State looks to continue its momentum on Friday when the team travels to South Alabama for a 6 p.m. tipoff. The game will broadcast on ESPN+.