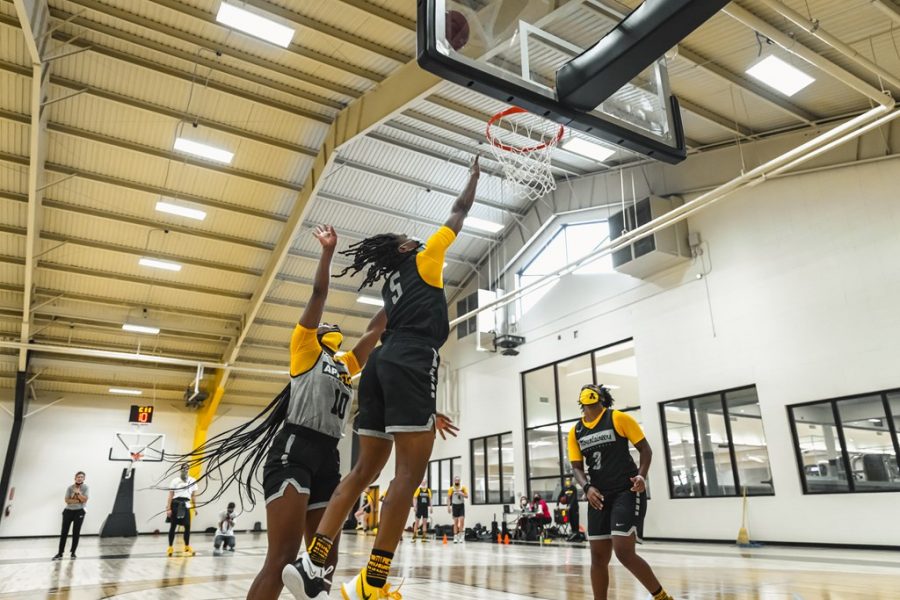 Senior guard Pre Stanley (#5) shoots a layup during an App State women's basketball preseason practice. Stanley, who was named to the preseason all-Sun Belt second team, is making the switch from shooting guard to point guard in 2020.

With just one winning season in the past seven years, App State women’s basketball is entering 2020 with high hopes of turning the program around.

“During the pandemic, our staff did what I would call like an autopsy on our program,” head coach Angel Elderkin said. “How can we get better here, what do we need to do better here, how can we change a couple of things here.”

This offseason has been far from a standard offseason Elderkin and her players usually enjoy. With COVID-19, racial injustice, a presidential election and more surrounding the nation, the team has found a way to enjoy basketball and use it as a way to escape the outside conflicts in the world.

“It’s been kind of difficult just adjusting with COVID and everything, but with all of my teammates wanting to get on track … it’s been awesome,” senior guard Pre Stanley said. “This is probably the best year so far for me. I’m getting in there, competing really hard and making it fun, even though there’s a lot of other things going on outside of this.”

The Mountaineers return a plethora of talent and experience for the 2020 season, including seniors Maya Calder, Michaela Porter, Lainey Gosnell and Stanley. Porter comes off a 2019 campaign in which Elderkin said, “she didn’t meet the expectations,” but has emerged as an early bright spot for this squad.

“Over the summer, she worked her butt off. She has been impressive,” Elderkin said. “Just her work ethic alone has been tremendous. She’s been a huge, huge bright spot.”

Heading into her seventh season with the Mountaineers, Elderkin noted one thing in particular she wanted her team to improve on: assisting.

“We haven’t been a team that’s assisted the ball at a high level,” Elderkin said. “In practice this season … we are assisting at a rate of 65% on all of our made baskets.”

Elderkin has outsourced and drawn inspiration from coaches and organizations across the country during the offseason to improve her team. In particular, Elderkin has tried to teach her team about Villanova men’s head coach Jay Wright’s two-foot jump stop. Wright teaches his players to come to a stop on two feet, mainly so that they’re under control. Also, Elderkin has looked to advances made in the NBA in terms of catching the basketball and quickly deciding what to do.

“I watched a lot of our stuff, and we would catch and hold … and be very robotic,” Elderkin said. “The NBA is always ahead … it’s just been really neat to kind of take some of those concepts and then apply them to our game, and to see our players really enjoy playing with that kind of freedom.”

Pre Stanley enters her final year with preseason second team all-Sun Belt recognition. Through her first years in Boone, the 5-foot-9 guard has been known as a dynamic two-way player, scoring the ball at ease and guarding the opponent’s best player.

“Pre Stanley is off to a terrific start … she’s elite right now,” Elderkin said. “She can get a bucket anytime she wants. Some of the passes the guys make in the NBA, they’re high level. Well, Pre Stanley is making them. And Pre Stanley is going to be a pro.”

However, this year, she’s making a move to point guard. Elderkin hopes her athleticism and dynamism can create space and open shots for her teammates. Stanley was hesitant at first but has come to accept her new role.

“It’s definitely out of my comfort zone,” Stanley said. “I think you have times, especially in life … where you have to step out of your box, that comfort zone. I’m just willing to do whatever it is the team needs me to do for us to be good.”

Junior guard Tierra Wilson was sidelined last season with an ACL tear, but finally returned to the court in 2020. Elderkin credits her as being one of, if not the, most vocal players on the team and a true leader.

“First day back that I let her do contact, she steps up and takes a charge. Coming off of an ACL (injury),” Elderkin said. “We haven’t been able to get anybody to take a charge in practice. We really did miss her last season.”

While the end of the season is still far from being here, the team is well aware of its inevitability.

“I can’t say enough about them,” Elderkin said. “My eyes will start to water up thinking about them leaving. They have just meant so much to me as a head coach.”

The Mountaineers tip off the season against Charlotte at home on Nov. 25.