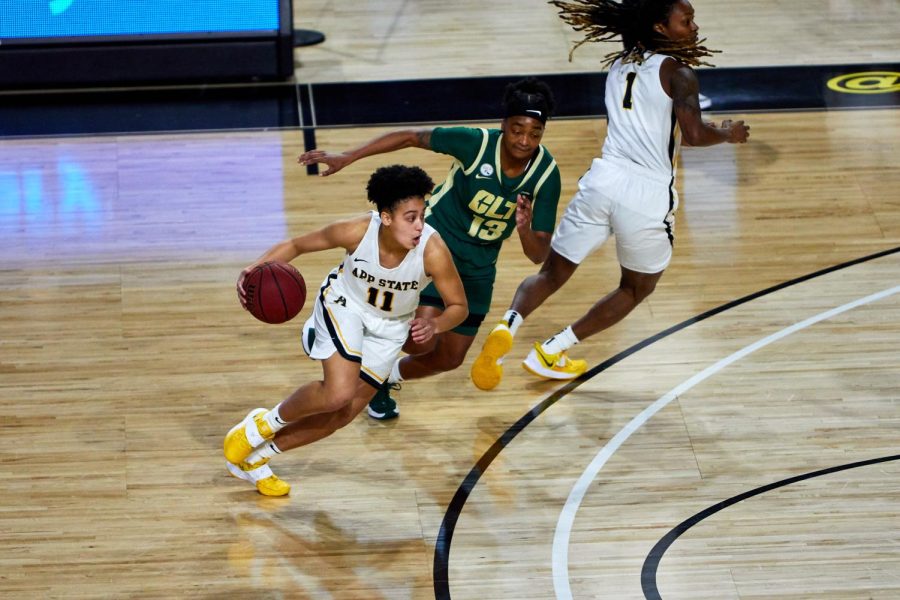 Sophomore guard Faith Alston drives into the lane against Charlotte. Alston averaged 4 points and 2.5 assists per game as a freshman.

As the Mountaineer women’s basketball team climbs into the 2021-22 season, new faces bring new opportunities in the High Country.

“Like a lot of teams in the country, we look different, and with different comes an opportunity,” head coach Angel Elderkin said. “We have an opportunity right now to develop another group of leaders for our program.”

Last season, the Mountaineers captured their second winning season in the past three years, culminating in a narrow defeat in the Sun Belt Tournament semifinals.

After the 15-12 finish, six Mountaineers departed, four graduating and two transferring. Pre Stanley and Lainey Gosnell led the Black and Gold in scoring as the only two Mountaineers to average double digits. The dynamic duo also grabbed the first and third most rebounds on the squad, leaving a large hole for Elderkin and her staff to fill in the new season.

App State returns seven players from the previous season, including four that contributed heavily last year. Super senior Michaela Porter started all 27 games last season and was the third-leading scorer for the Mountaineers at 8.7 points per game. Senior guard Brooke Bigott and junior guard Janay Sanders also return to Boone after seeing frequent starts last season. Bigott is App State’s best returning outside threat, shooting over 33% from deep, and Sanders is an aggressive slasher who gets paint touches with ease. Sanders attempted the most free throws on the team last season despite playing the seventh most minutes.

While Stanley started at the point guard position, sophomore guard Faith Alston saw a lot of action at the one, allowing Stanley to play her traditional off-ball role on the wings. The rising sophomore dished out the team’s second most assists last year, one behind Stanley at 68, good for 2.5 per game, and will likely start at the point this year.

Despite returning only half of the team, the Mountaineers add eight newcomers, including three transfers and five freshmen. Senior forward Alexia Allesch transfers from Seton Hall after averaging 4.3 points and 5.0 rebounds per game in 23.4 minutes of action. Senior guard Breanna Locke joins the Black and Gold after averaging 16.5 points, 8.1 rebounds and 2.2 assists per game on 47% shooting. The addition of Locke provides another deep threat and able scorer for Elderkin to utilize. Junior guard Taylor Lewis comes to Boone after spending two seasons at Middle Tennessee State, where she averaged 1.8 points and 2.7 rebounds off the bench last season.

“We had an opportunity this summer to bring eight new players to campus and fuse them with seven returners,” Elderkin said. “We’ve shaped and reshaped our identity and just spent a lot of time on building our team culture.”

“I think our non-conference is gonna be a lot of growth and a lot of still figuring out who we are, but we’re excited for this year’s Sun Belt slate,” Elderkin said.

The Mountaineers welcome Lees-McRae to Boone Tuesday night as they tip off their season against the Bobcats at 5 p.m.

“I think our team each day we try to come in with the motto of getting 1% better, and at this point, I’m really, really excited to tip with this team and just to continue to grow,” Elderkin said.