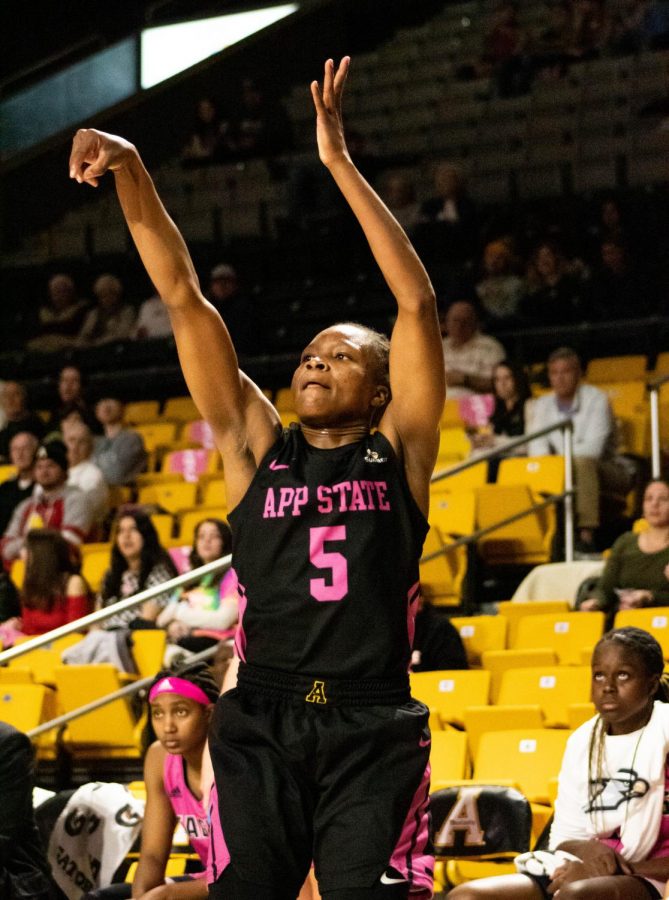 Junior guard Pre Stanley finished with 28 points in App State's 83-80 2OT win over Coastal Carolina on March 7. Stanley and the Mountaineers begin postseason play Tuesday when they take on Arkansas at Little Rock at 7 p.m.

With the regular season over, the App State women’s basketball team is gearing up for another postseason, and with last year’s success still fresh on their minds, the Mountaineers will try to mirror the postseason they had a season ago.

App closed out the season with an 83-80 win against No. 2 seeded Coastal Carolina, earning the Mountaineers the No. 7 seed in the conference tournament.

Last year, App State reached the semifinals of the conference tournament before falling to Arkansas-Little Rock and then went on to win the Women’s Basketball Invitational.

With several key players from last year’s run still on the roster, their experience will be very valuable for the Mountaineers.

“We’re feeling very confident and we know when we play our best, we can compete with anybody,” Head Coach Angel Elderkin said. “[Our veterans] allow me the opportunity to tap into those experiences and talk to them about how they’ve been as a team in March and then bring them back.”

Elderkin isn’t the only one with this mentality as her players are also well aware of what it takes to win in March.

“We’re definitely confident. We’ve put in the work and we’ve peaked at the right time and it’s just about executing down the stretch,” senior guard Ashley Polacek said. “We expect nothing but the best from each of our players.”

Junior guard Pre Stanley will also have to play a big role for App this postseason. Her 13.8 points per game makes her the leading scorer for the team. Her teammates will also look for her to step up again this postseason as she was named MVP of last year’s WBI Tournament after averaging 19.7 points over the four game stretch.

“I know as a group, we’re just going to go in and play every game as if it’s our last and go hard at it,” Stanley said. “We won the WBI championship and we want to win a Sun Belt championship and it just pushes me to go hard.”

The Mountaineers will begin their march for a Sun Belt championship when they take on fifth seeded Arkansas-Little Rock on Tuesday, March 7.