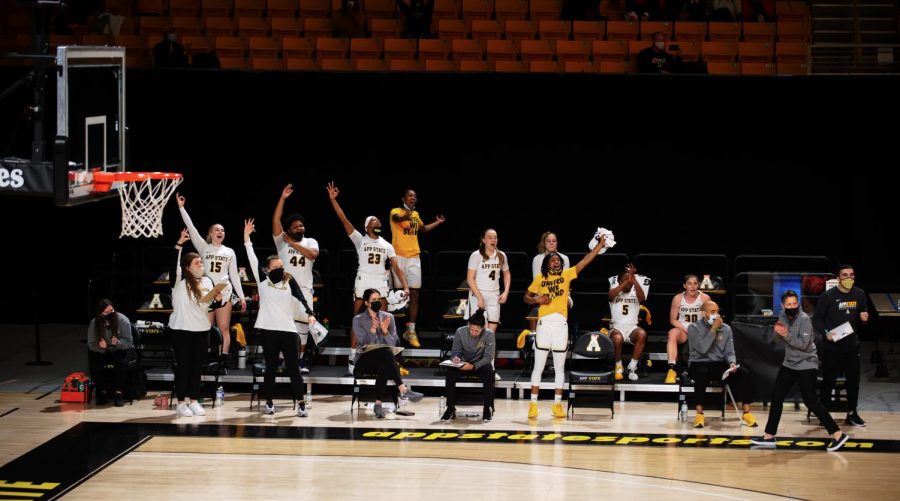 The App State bench celebrates during a loss to Troy Jan. 29 at the Holmes Center in Boone. The Mountaineers won two Sun Belt tourney games on a run to the conference semifinals, before falling to East division No. 1 seed Troy 63-60 Sunday in Pensacola, Florida.

App State women’s basketball played in the Sun Belt conference tournament in Pensacola, Fla. as the No. 3 seed out of the East division. The Mountaineers won two games, advancing to the semifinals before tightly falling to eventual champion Troy.

App State tipped off the tournament with a 70-60 victory over East division sixth seed Louisiana-Monroe on Friday. Four Mountaineers reached double figures as the team led for all but 48 seconds of the contest.

“I’m proud of our group for earning another 40 minutes,” head coach Angel Elderkin said. “Survive and advance, that’s what March is about.”

The Mountaineers opened game one with an immediate 10-0 blitz. They were able to stretch the lead to 40-24 by halftime behind 9 points from junior Michaela Porter and 8 apiece from senior Lainey Gosnell and redshirt junior Tierra Wilson.

“I’ve been really diligent over the last few games that we need to start a certain way, we need to set the tone … and I thought our team did just that today,” Elderkin said.

After the Warhawks tightened the game in the third, App State quickly put the game out of reach in the fourth. By the 4:23 mark, the lead had been stretched out to 70-46. The Mountaineers held on to win 70-60.

“I thought we played a really good first half and, as expected, Monroe did not have any quit in them,” Elderkin said. “I was proud of our starting group the way they started the fourth quarter, the way they sent a message that we were going to have the last run.”

Wilson finished the game with 11 points, while freshman guard Faith Alston contributed 13 points and seven assists off of the bench. Porter and Gosnell each dropped 14 points and grabbed a combined 16 rebounds.

“(Gosnell) has been just so consistent for us,” Elderkin said. “Every night when Lainey steps on the floor, we know what we’re getting from her.”

In the quarterfinal matchup on Saturday, the Mountaineers went up against the West division No. 2 seed, Texas-Arlington in a defensive battle between teams fighting to keep their season alive.

Neither team shot above 33% from the field. App State only shot 26.8% from the field, but was able to make big shots late and came out with a 54-46 victory.

After the first quarter, the Mountaineers were up 15-14, led by Gosnell and Stanley combining for 9 points in the quarter.

App State went on a scoring drought in the second quarter, only scoring 4 points while committing nine turnovers. Going into halftime, Texas-Arlington held a 25-19 lead.

“When we went into halftime, I looked at the percentages that we were shooting, I tried to figure out what could be our anchor,” Elderkin said. “I talked to our team about defense, letting that be our anchor.”

Coming out of the locker room, the App State defense dominated the third quarter, limiting the Mavericks to just five points while forcing ten turnovers. The Mountaineers took a 31-30 lead into the fourth quarter.

“Stops are what ignites us, so we were definitely all on the same page with that,” Stanley said. “That energy, that’s what we were feeding off of, that’s what kept us going.”

Stanley took control at the free throw line in the fourth quarter, sinking 8 of 8, helping App State put the lead out of reach. Stanley finished the game leading all scorers with 24 points, also adding six rebounds.

“(My team) believing in me, that’s what kept me going. I just kept a positive attitude and I was able to knock down shots when it mattered,” Stanley said.

Gosnell also had a strong outing with 8 points and nine rebounds while helping control the paint on defense, limiting the Mavericks to just 24 points in the paint.

On Sunday, the Mountaineers and Trojans faced off in a semifinal matchup. App State faced a 13 point deficit early on, but the team crawled back into the game. Down by three in the waning moments, the Mountaineers had two attempts to send the game into overtime, but both missed the basket and Troy took the win 66-63. App State had the closest game in the tournament against the Trojans, who ultimately won the championship.

“I’m really proud of the group,” Elderkin said. “I feel like our team fought until the end and we were in a position with one possession to potentially go to overtime, so there’s not really much more you can ask. I thought we left it all out there.”

To start the game, Troy jumped out to a 13-0 lead. The Mountaineers went scoreless for the first five minutes of the game, before Porter hit a jump shot to end the drought. In the back end of the first quarter, App State scored 16 more points, but trailed 27-18 heading into the second quarter.

In the second quarter, the Mountaineers outscored Troy 20-11 to erase the deficit behind a strong effort from Stanley. By halftime, App State tied the game at 38 and Stanley was up to 21 points. Troy shot 11-17 in the first quarter, but only 4-15 in the second after App State amped up its defensive intensity.

The second half followed a similar trend. In the third quarter, the Trojans outscored the Mountaineers 24-14 and held a 62-52 lead going into the final period. In the fourth quarter, App State’s defense started getting stops and held Troy to 4 points.

With 45 seconds to play, Porter hit a 3-pointer to pull the Mountaineers within 3. After another defensive stop, App State had two chances to tie the game on 3-point attempts from Porter, but both shots were off the mark and Troy took the win.

Stanley finished with a game-high 29 points, tying her career high, and 14 rebounds. Gosnell wasn’t as productive offensively with 7 points, but she was responsible for 12 rebounds and four steals.

“I’m very proud,” Stanley said. “It’s such an honor to play with everyone on the team that’s here. This is such a good group, the coaching staff, and it’s been an honor.”

App State exits the tournament with a 15-12 overall record. While this could have been the final game of the season, there is still a chance that the team could receive a bid to play in a postseason tournament, such as the Women’s Basketball Invitational, which the Mountaineers won in 2019.