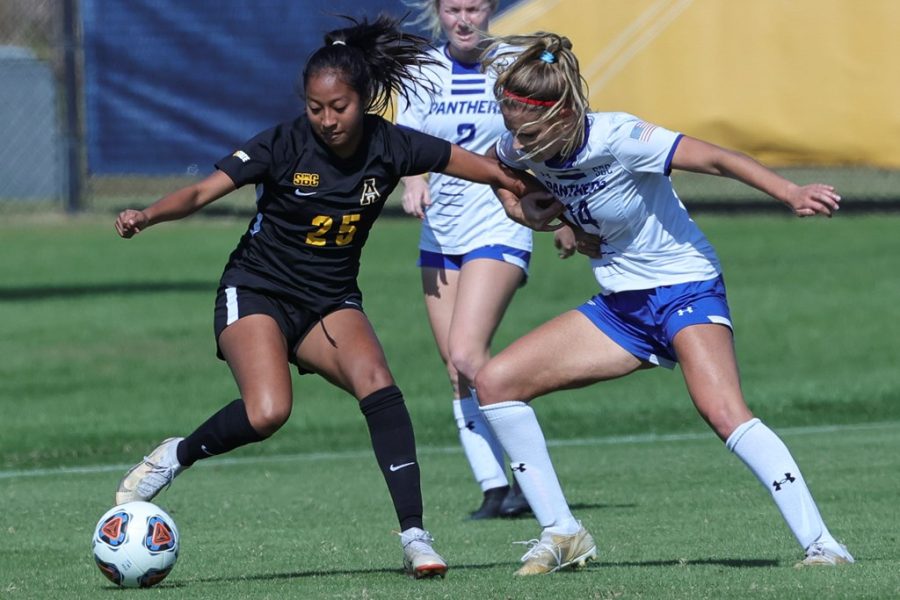 The Mountaineers started its tournament run Nov. 1 as they secured a 2-1 victory over No. 6 seed Texas State at the Foley Sports Tourism Complex, clinching a spot in the Sun Belt Women’s Soccer Championship quarterfinals.

The team took an early lead from a goal by sophomore striker Breckyn Monteith. Monteith intercepted the ball off a Bobcat pass, dribbled past the Texas State defense and fired a shot into the back of the net.

Texas State equalized 10 minutes later, with junior forward Kiara Gonzales scoring for the Bobcats. Gonzales received the ball in the six-yard box from a cross and volleyed the ball past App State junior goalkeeper Kerry Eagleston.

App State scored early into the second half as graduate student midfielder Audrey Viso took a shot from long range into the top right corner. It was her first career goal for the Black and Gold.

“I think we came out and played really hard on the offense and defense,” Viso said. “I’m really excited to have scored and got us ahead in the game, and I’m glad we kept up for the win and clawed it out.”

App State pulled off the first upset in the tournament as they eliminated No.6 seed Texas State while being ranked 11th in the conference. The Mountaineers played their second game of the Tournament Nov. 3, as they faced No. 3 seed Georgia State in the quarterfinals.

The Panthers took the lead in the 26th minute, scoring off a header from a corner kick. Junior forward Jimena Cabrero whipped the ball into the penalty area, and junior defender Eva Diez Lois volleyed it into the net.

The Mountaineers bounced back, getting an equalizer in the final minute of the first half. Junior midfielder Emma McGibany delivered a low cross to Monteith, who managed to lose her defender. Monteith scored her fifth goal in her last four games, tallying her second of the tournament.

Both sides couldn’t manage to score in the second half, sending the game into overtime with the golden goal rule implemented where whoever scores first in overtime wins. Georgia State won a corner and scored off the set-piece again, putting the game to rest after just two minutes into overtime.

“I just want to say this is the best team I’ve been on and I want to thank all my teammates for making it the best atmosphere to have my last year in,” senior defender Kirsten Seely said.