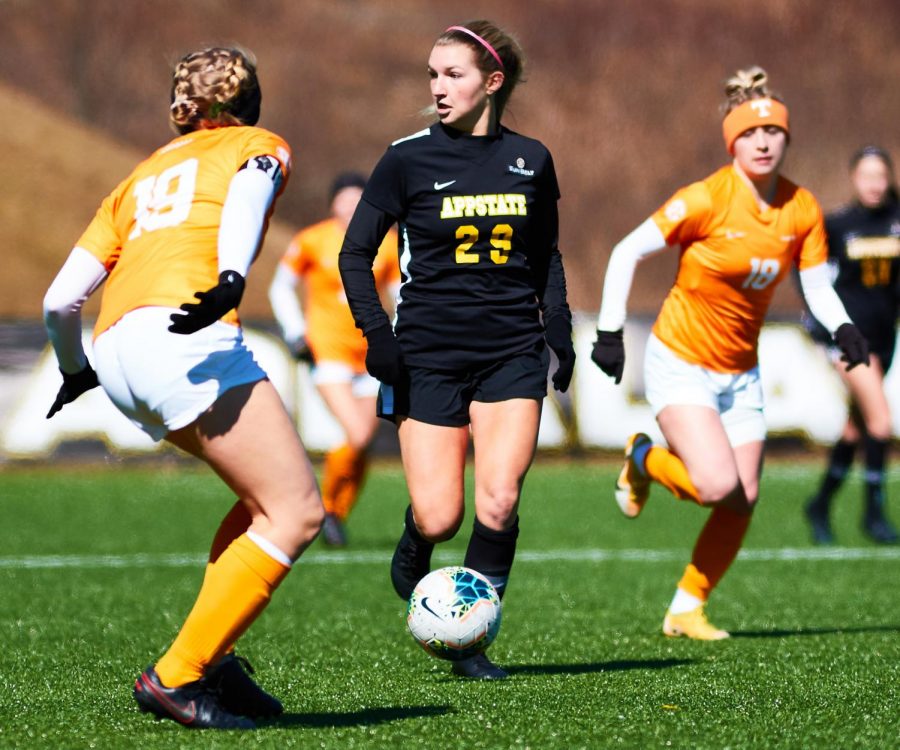 App State freshman midfielder Kaitlyn Little looks to make a play during the Mountaineers' loss to Tennessee on Saturday in Boone. "That’s how you get better, you play against the teams that are going to be in the tournament and you push yourself," App State head coach Sarah Strickland said.

App State women’s soccer didn’t have the start to the season they hoped for, losing 0-7 to Power Five program Tennessee at the Ted Mackorell Soccer Complex Saturday.

“We wanted to play at the highest level possible and play the best opponents we can to make ourselves better,” head coach Sarah Strickland said.

Tennessee struck first in the 13th minute after winning the ball from a goal kick. A pass through the App State defense got to Tennessee forward Jaida Thomas, who slid it into the bottom right corner.

Five minutes later, the Mountaineers gave the ball away in their own half and Volunteer winger Mackenzie George crossed the ball from the right side of the box. The ball took several touches before rebounding off to Thomas, who scored once again. She scored two goals in less than 20 minutes against App State after scoring a hat trick in her last match for the Volunteers against Gardner-Webb.

App State gave the ball away again in its own half and Tennessee got its third goal in the 30th minute. With six minutes remaining in the first half, the Mountaineers conceded an own goal, ending the first 45 minutes of the game down by four goals.

In the second half, the Mountaineers played in a more positive approach, being in the attacking third more often and playing more solid defensively. After an hour a play a pass over the top of the Volunteer defense got to App State Junior midfielder Lauren Murphy, who took a shot right on the outside of the 18-yard box. The shot was blocked for a corner, with this being App State’s closest chance at a goal all game.

Tennessee got their fifth goal of the game in the 81st minute from a corner kick. Mountaineer sophomore goalkeeper Kerry Eagleston knocked away the initial header, but the Mountaineers failed to clear the ball, allowing Tennessee to slot in the rebound. The Volunteers proceeded to show their dominance, scoring again in the 86th and 88th minutes.

The game ended 0-7, with the Mountaineers registering four shots compared to Tennessee’s 22. App State played with a very defensive line to cope with Tennessee’s quick forwards, but the Volunteers used their pacey and tricky wingers to go down the flanks, which was the main difference between the two sides.

“That’s how you get better, you play against the teams that are going to be in the tournament and you push yourself, expose yourself, and figure out what is exposed and what needs to get fixed,” Strickland said.

App State’s next game is Thursday against Davidson at 7:30 p.m. at the Ted Mackorell Soccer Complex, where the Mountaineers will look to respond after a heavy defeat in their season opener.