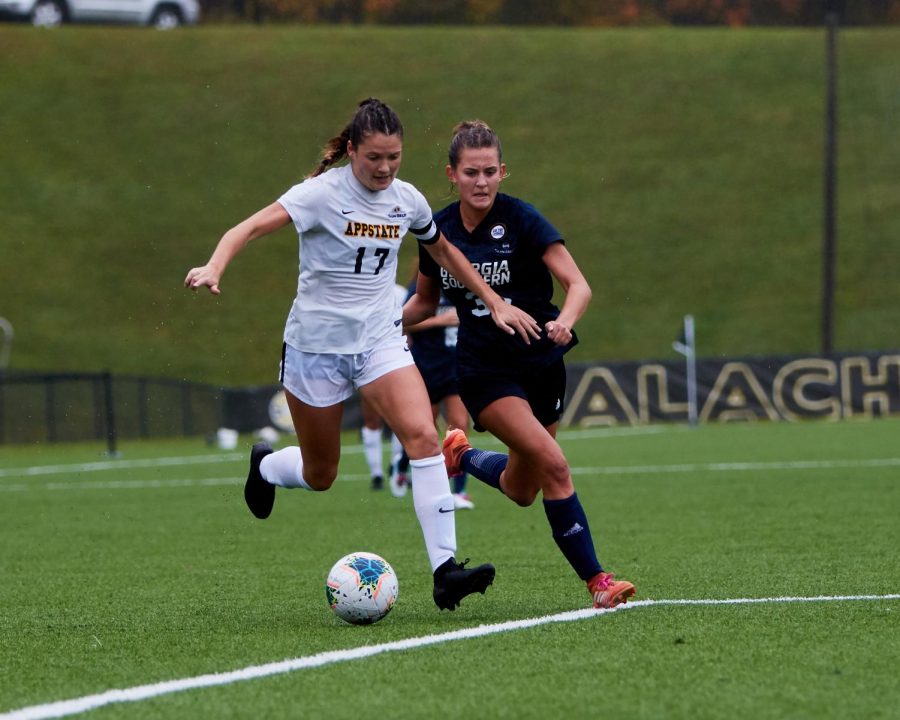 Senior midfielder/forward Tess Cairney holds off a defender during App State's 1-0 loss to Georgia Southern Oct. 11. Cairney and the Mountaineers ended their regular season on a high note, knocking off Coastal Carolina 1-0 Oct. 25 on Senior Day.

App State women’s soccer ended its season with a 1-0 win over the Coastal Carolina Chanticleers Oct. 25, finishing the regular season at 4-8-1 overall and fourth out of six in the Sun Belt East Division.

Earlier this year on Oct. 4, the Mountaineers suffered a 1-0 loss at Coastal Carolina in the last minute of the second overtime period. In the loss, App State was missing its leading scorer, senior forward Mary Perkins due to contact tracing from a positive COVID-19 test.

“They always say, ‘Make your presence known, but make your absences felt,’ and I would say if anything, Mary’s absence was absolutely felt every minute she wasn’t around the team,” head coach Sarah Strickland said. “Especially in that game, the way Coastal plays, and the way their midfield shape is, it’s a game that Mary’s gonna be very successful in.”

The rematch on senior night was similar to the first match, with sophomore midfielder Hayley Boyles scoring the winning goal in the 87th minute after her shot ricocheted off a Coastal Carolina defender into the net. Sophomore goalie Kerry Eagleston tallied six saves en route to her fifth shutout of the year. One of her six saves was from a penalty kick in the 16th minute.

Showing the team’s aggressiveness in this game, App State recorded 12 total shots with eight in the second half. Out of App State’s 12 shots, three were on goal.

“That’s how we have to be in the box. You got to hunt the ball down,” Perkins said.

While quarantining because of contact tracing, Perkins missed five games out of App’s 13 total in the regular season. She said the news was hard to believe when she found out she couldn’t play.

“Then, it set in that it was real, and I just thought, ‘OK, how do we use the next two weeks to make sure that I don’t miss any more time than I need to?’” Perkins said.  “Two weeks for a soccer player to be stuck inside is a lot of time off.”

App State’s young roster, consisting of eleven freshmen and six sophomores, went 1-3-1 during the span of Perkins’ absence. As a leader of the team, Perkins took it upon herself to mentor her young teammates as she prepares to graduate and leave the team.

“The best thing I can do, as being on a younger team as one of the older girls, is to set an example of what being a good teammate is and being able to switch on and compete whenever you can,” Perkins said. “I think as a leader, just trying to show them how important it is to compete when they step onto the field on game day.”

Perkins, along with fellow seniors Amber Anderson and Tess Cairney, were honored with senior night celebrations before the game.

Strickland said Perkins’ leadership is an important part of the team, and the Mountaineers will miss her locker room presence after graduation.

“I think that the respect they have for her and what she gets out of people is something that is an intangible thing,” Strickland said. “It’s really hard to replace.”

Now done with the regular season, the Mountaineers will have a week and a half to prepare for the Sun Belt Conference tournament, which starts Nov. 4 and goes through Nov. 8 in Foley, Alabama.