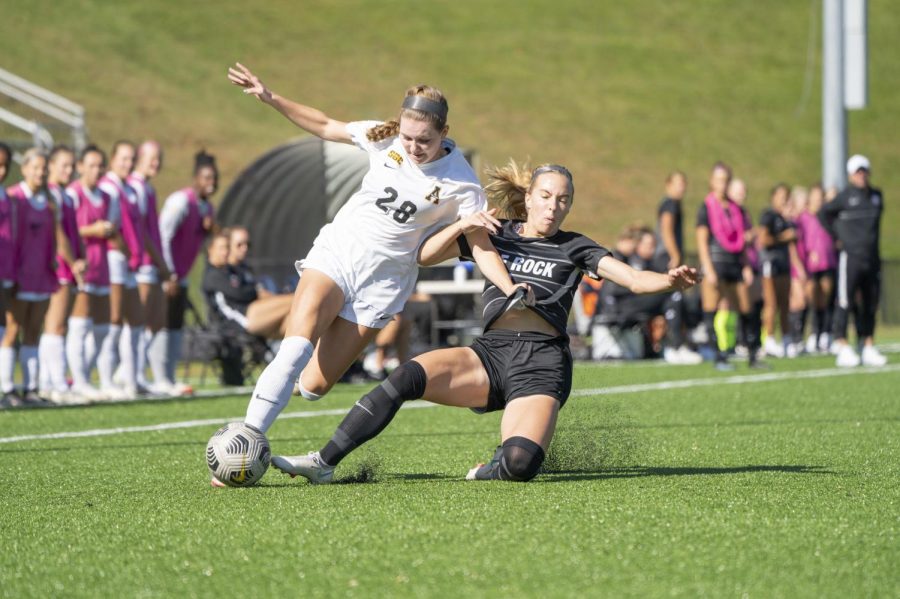 Sophomore forward Breckyn Monteith battles away from a Little Rock defender. Monteith has scored three goals in the last two games and has eight total on the season.

App State women’s soccer secured a 2-0 victory over Louisiana Oct. 21 at the Ted Mackorell Soccer Complex. The Mountaineers earned their first win in conference play, putting an end to an eight-game losing streak.

“It’s been a lot of ups and downs, but I’m proud of the kids for persevering and continuing to battle every single day,” head coach Sarah Strickland said. “We’ve been battling, playing, competing and getting better and better every day, and it was just missing that one piece.”

The Mountaineers took the lead in the 16th minute when junior winger Hayley Boyles crossed the ball toward sophomore striker Breckyn Monteith, who kicked the ball into the net. App State extended its lead 10 minutes into the second half from a long shot by sophomore midfielder Katie Fuller. Fuller scored her first career goal, taking a shot into the bottom right corner from the edge of the 18-yard box.

A​​dvice from fellow player, Mumu Guisasola, “low and hard into the corner, baby” played through Fuller’s head as she shot, she said.

App State played its final conference game of the season Oct. 24 against Little Rock, celebrating a 2-1 win on the program’s Senior Night.

“It’s great for the seniors to finish out by winning at home and be able to get a lot of players some minutes heading into the conference tournament,” Strickland said.

App State struck first after graduate student midfielder Audrey Viso passed the ball to freshman midfielder Sara Widderich, who delivered a through ball into the box to Monteith. Monteith fired the shot past Little Rock goalkeeper Saskia Wagner. App State had the lead in the 17th minute.

The Mountaineers doubled their lead in the 57th minute of the match. Viso crossed the ball in the box near Monteith, who tapped the ball into the net, nicking her second goal of the game. Little Rock midfielder Fanney Einarsdottir cut the deficit in half from a free kick in the 82nd minute, but the Black and Gold defense held tight to preserve a victory.

Monteith is the top goal scorer for the Mountaineers this season with eight goals, grabbing three goals in her last two games.

“It’s a whole team effort,” Montieth said. “To finish off with two wins going into the conference tournament is not only a confidence boost, but it lets us know we can do this and go win this tournament.”

The Mountaineers improved their record to 6-10-1 overall and 2-8-0 in conference play. App State returns to action next week starting their Sun Belt Conference Tournament run Nov. 1 in Foley, Alabama.