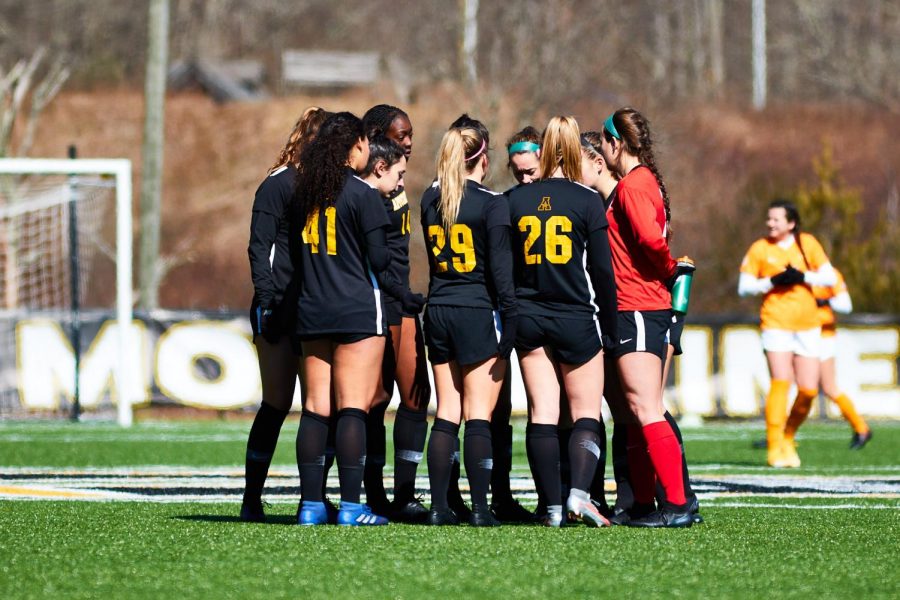 App State women's soccer players huddle during the loss to Tennessee Feb. 20 in Boone. The Mountaineers bounced back in their second game of the spring, knocking off Davidson 1-0 on Thursday thanks to a penalty kick goal from Olivia Cohen in the 60th minute.

“I’m proud of the girls; they stuck to the plan, figured it out, and competed,” head coach Sarah Strickland said. “We had to work really hard to find the gaps and passing lanes between players.”

The first half ended 0-0 as both sides struggled to break each other’s defense down. The Mountaineers played with a high defensive line, with the backline being the infrastructure of their victory. App State nearly took the lead near the end of the first half, with freshman midfielder Jordan Grigsby recording the team’s first shot on target. Sophomore left back and team captain Liney Brantley drove down the left side of the box, cut past her defender and passed it to Grigsby, who was inside the penalty area. However, Davidson’s goalkeeper knocked the close-range shot away.

App State’s defense continued playing at a high level in the second half, keeping their high line and providing accurate passes over and through Davidson’s defense for the Mountaineer forwards.

Just as she did in the first half, Brantley drove down the left flank and won the Mountaineers a penalty. After winning the ball at midfield, Brantley dribbled past one defender into the penalty area before drawing a foul, giving App State a chance to break the tie with a penalty kick.

Sophomore center back Olivia Cohen stepped up, kept her cool, and struck it hard and low into the bottom right corner of the net for her second goal of the year.

“We practiced (penalties) in the fall, I stepped up and was excited to take it,” Cohen said.

Davidson was determined to get an equalizer, but the Mountaineer defense held strong. Davidson was awarded a free kick in the 67th minute from 25 yards out. The shot went towards the upper right corner, but it was a routine save for App State sophomore goalkeeper Kerry Eagleston.

In the final minute of the game, the Wildcats had hope with a last-minute corner kick. However, the Mountaineer defense headed it out to hang on to the shutout. Eagleston registered her sixth clean sheet of the season and is one shutout away from tying the program career record.

“The defense bought into what we asked them to do,” Strickland said. “They were more confident on the ball and I thought athletically, we could compete.”

App State now takes a two-week break, with the Mountaineers returning to action against Marshall on March 13 at the Ted Mackorell Soccer Complex.