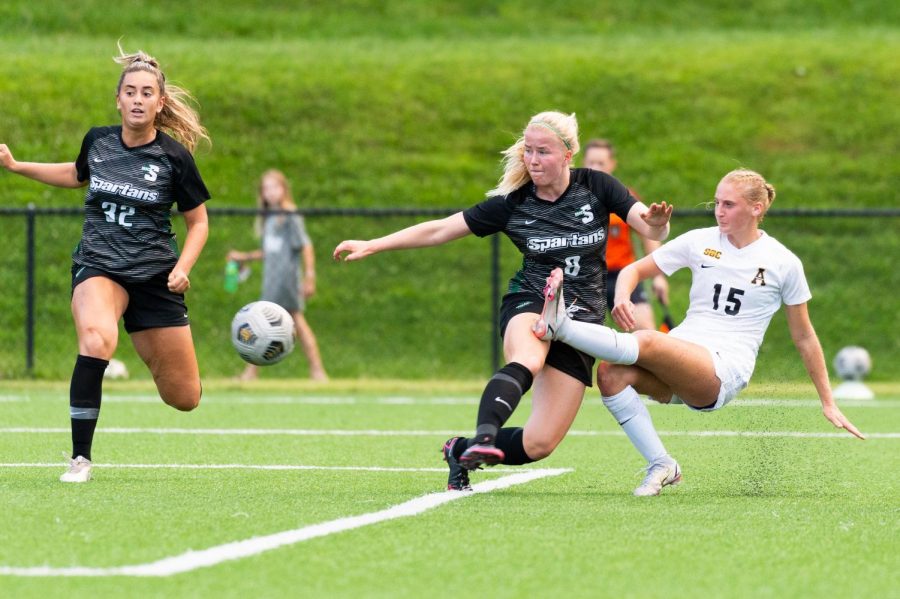 Freshman midfielder Sarah Widderich takes a shot on goal in App State's 2-1 victory over USC Upstate earlier this season. The North Carolina native has tallied two assists and two shots on goal in her seven starts for the Mountaineers.

Women’s soccer opened their four-game road trip with victories over Wofford and Florida International Sept. 9 and 12. The matches serve as the Mountaineers’ last non-conference opponents before conference play begins against Georgia Southern Thursday.

In their first match against Wofford, the Mountaineers struck early. In the seventh minute, sophomore forward Brecklyn Monteith found the net off an assist from freshman forward Stephanie Barbosa. The goal marks Monteith’s third on the campaign and Barbosa’s second assist on the season.

App State would strike again in the ninth minute to take a 2-0 lead. Senior defender Kirsten Seeley scored unassisted thanks to a corner kick produced by a header from freshman midfielder Gracie Gialotto. The goal marks Seeley’s second on the season.

Wofford would score in the 36th minute to make it 2-1. In the second period, neither team found the back of the net, leading to an App State victory. Junior goalkeeper Kerry Eagleston posted three saves following a 20 save performance in a loss against Wake Forest.

“Definitely came out stronger than we ended but we gotta keep that mentality up. Kind of let up and let them back in the game, but kept them off and shielded them off and ended up winning,” Seeley said.

In the second match against FIU, the lone goal came in the 24th minute. Montieth scored off an assist from freshman midfielder Sarah Widderich and marked Monteith’s fourth of the year. The score was enough to give App State the victory and improve to 4-2-1 heading into conference play. Eagleston finished with 11 saves. This was the 10th career shutout for Eagleston, putting her two-back from fourth in program history.

“I thought coming down here and managing the travel and getting up yesterday at four o‘clock in the morning and making it through the day and managing the game today. I thought the girls did really well,” head coach Sarah Strickland said.