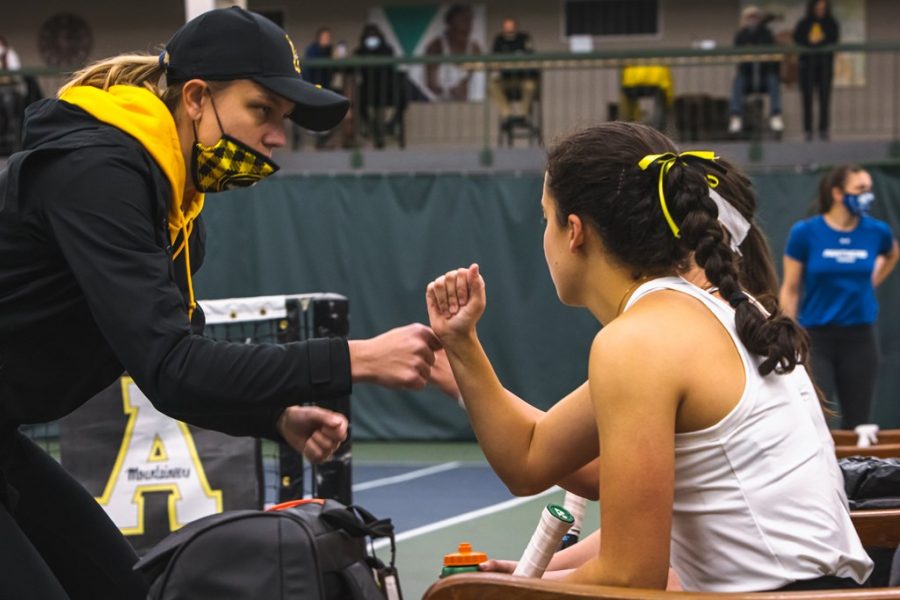 The Mountaineers open conference play 2-0 and improve to 3-5 overall. Georgia State falls to 2-7, and Georgia Southern falls to 4-6.

Against Georgia State, App State lost the doubles point, as the teams of senior Sandra Anglesjö and sophomore Helena Figueras, and sophomore Virginia Poggi and freshman Peri Tippins, each lost 6-3.

In singles action, Figueras grabbed the first point for the Mountaineers with a 6-3 and 6-2 victory. After freshman Kseniia Aleshina dropped her match, senior María José Zacarias won a 7-6 tie breaker and a 6-4 set to secure the point.

Facing a 3-2 deficit, Poggi also won her singles contest with scores of 6-4 and 7-5, evening the contest 3-3 overall.

Anglesjö sealed the win with a 6-2 second frame victory, following a tiebreaking first-set victory over Nansi Toskova as the No. 5 in the lineup.

The next morning against Georgia State, the Mountaineers captured both doubles contests and three singles victories for the overall team triumph.

The team of Figueras and Angelsjö redeemed their previous loss in doubles’ action, winning 6-3 in the first match. Aleshina and Zacarias secured the doubles point with a 7-5 victory, giving App State a 1-0 lead.

Aleshina won her singles match and third match of the season with a 6-1, 6-2 victory against Van Diemen. Figueras earned her third straight singles win after a 6-2, 6-4 win to give the Mountaineers a 3-0 lead.

After a slim 7-6 advantage in the first set, and dropping the second set 4-6, Zacarias won 7-5 in the third set, giving App State its first shutout of the season.

The Mountaineers add to a 16-game win streak at home, and a 3-0 home record this season.