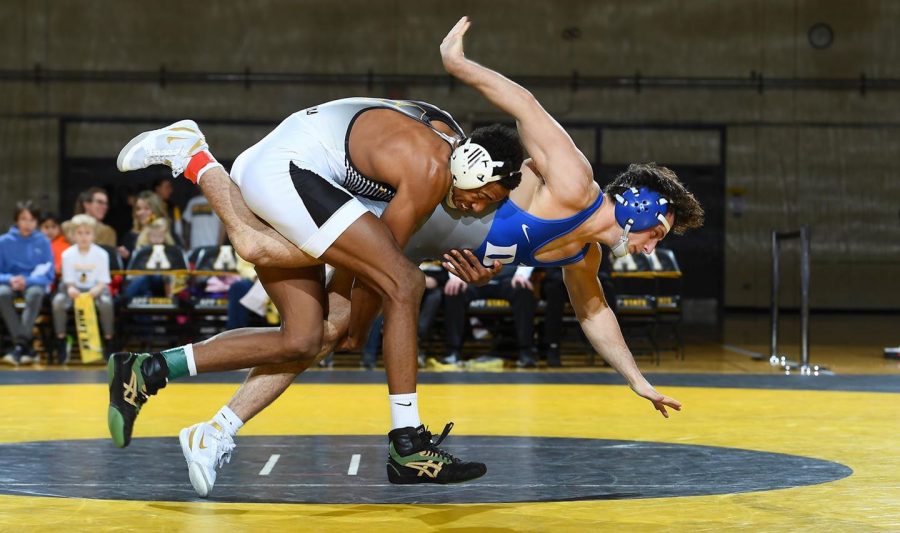 App State shut out Duke on Thursday night to improve to a 6-2 record on the season. Before the match began, head coach JohnMark Bentley received a plaque commemorating his 100th career win that he earned against Presbyterian on Jan. 12. His team proceeded to dominate, winning every match against the Blue Devils. The 45-0 victory also marked the Mountaineers’ fourth win in their last five meetings against in-state opponents.

“It’s good; it’s an in-state rival, and there is a lot of name recognition that goes with ACC schools in North Carolina,” Bentley said. “It’s a big deal for our guys. They grow up, and they’re an in-state fan of one of the schools here, so any time we can beat an in-state rival, it’s always good.”

Redshirt junior Codi Russell started off the Mountaineers’ dominance, scoring the only pinfall of the night early on.

“We worked really hard as a team, so it just came together at the right time for me tonight,” Russell said.

A redshirt junior coming out of Collins Hill High School, Russell was named SoCon Wrestler of the Week last week.

One of the highlights of the night was junior Thomas Flitz’ 9-4 win over Duke’s Mason Eaglin, a redshirt freshman ranked No. 24 nationally.

“A lot of people don’t know, but that was a really big win he had tonight,” Bentley said. “It was just incredible, beating a nationally-ranked opponent in front of this crowd. It was a big deal.”

Flitz was an all-state wrestler and a four-year letterwinner for Piedmont High School in Monroe, N.C.

Bentley looks to continue this level of dominance as the season progresses, and said he hopes to use what the Mountaineers did tonight as an example of the team’s potential for success.

“We had a lot of different scoring option opportunities where we were attacking the leg and that’s something we preach in the wrestling room,” Bentley said. “(We’ll) just keep going back in the training room and make sure we’re still attacking, being aggressive and scoring a lot of points.”

The Mountaineer’s next matchup is at SoCon rival Chattanooga on Feb. 2.