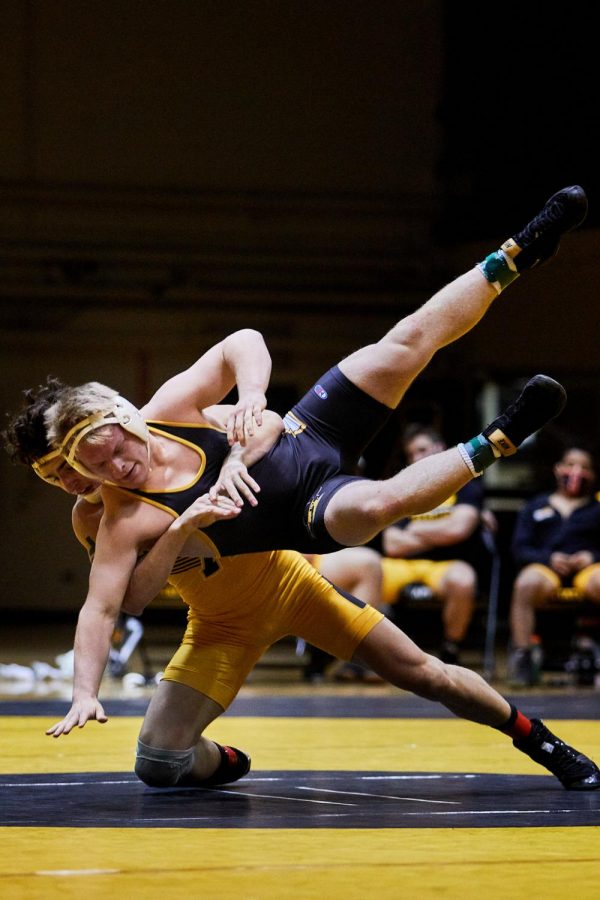 App State wrestling opened its 2020-21 season Friday with the Black & Gold Instraquad scrimmage event. The Mountaineers returned to action exactly 300 days after App State competed in Varsity Gym with Senior Day against VMI back on Feb. 23.

“All in all, it was good,” head coach JohnMark Bentley said. “We learned a lot about our team tonight and some things that we need to work on.”

The event simulated a dual meet between assistant coach DJ Fehlman’s “Black” squad and assistant coach Randall Diabe’s “Gold” squad, where each team won five matches and were tied at 18 points. Based on the tiebreaking criteria used in regular-season duals, the Black team was credited with the tie breaking point based on a pin from true freshman Tristan Pugh at 149 pounds.

Russell and Flitz, who, alongside redshirt junior Jonathan Millner, were NCAA qualifiers last season before the tournament was canceled, each picked up decision victories in the evening finale. Bentley accredited their winning to the work they put in over the offseason.

“All three put in a tremendous summer, and they found ways to train,” said Bentley. “They were very self motivated to find a way to continue improving.”

The event marked the debut of nine true freshmen, who competed over the course of afternoon prelims and the night session. Six true freshmen and three redshirt freshmen accounted for nearly half of the spots in the 10 weight classes.

“We’ve got a lot of young guys who are capable,” said Bentley. “We’ve been very excited about this freshman class after seeing them training and in the (wrestling) room”

For Bentley’s squad, the event meant an opportunity for self-evaluation, and to prepare for the upcoming year. Though Bentley would have liked to  see sharper execution, he said his team will be prepared to play other competition throughout the course of the season.

“We had some experienced guys that looked good tonight, and we had some guys that maybe were not as offensive or opening up as much as I would like,” said Bentley. “These guys know each other so well, it’s not the same as wrestling an opponent you don’t see in the room every day.”