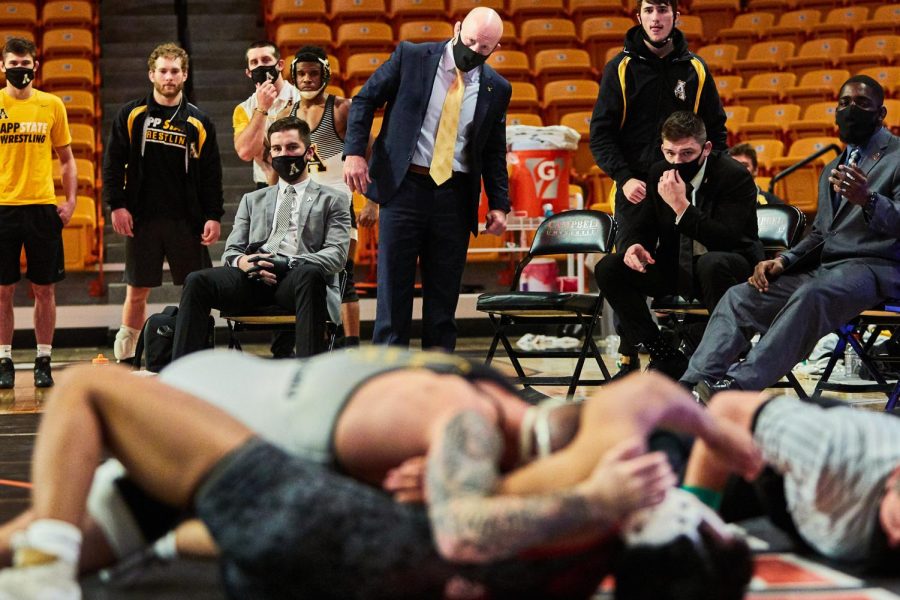 Head coach JohnMark Bentley and the Mountaineers look on during their match with Gardner-Webb. App State won the match 28-6.

After the 2019 NCAA tournament was canceled due to COVID-19, and the 2020-21 season was delayed and abbreviated, the Mountaineers look forward to a 2021 season featuring a complete schedule, less travel restrictions and fans back in the crowd.

“It’s much different this year,” wrestling head coach JohnMark Bentley said. “One of the things we pride ourselves on is having such a great home-meet atmosphere and being at Varsity Gym in front of a packed house almost every time we wrestle.”

“We had a lot of guys that had to wrestle an abbreviated schedule,” Bentley said. “Our guys are excited to get back to competing and feeling what the normal season routine looks like.”

Last season, Millner finished in eight place at the NCAA championships in the 149-pound bracket. Bentley stated this year, Millner has even higher expectations.

“He’s lifted the bar and set his goals higher this year,” Bentley said. “He wants to be a national champion. That’s his goal before he leaves here.”

“He senses that he has unfinished business,” Bentley said. “He thought he would get on that podium last year in St. Louis, and he’s disappointed he didn’t do that, so he’s extremely motivated with this being his last opportunity.”

Returning alongside Russell in the 125-pound weight class is redshirt sophomore Caleb Smith, who went 10-1 last year. Bentley noted the potential for competition within the weight class between Russell and Smith.

“In his own right, I think he would be a great option for us at 125,” said Bentley. “We’ve got two of the best 125-pounders in the country in our locker room, and that’s a great problem to have.”

“That was kind of his breakout season,” Bentley said. “I’m expecting even more consistency from him this coming year.”

With their NCAA qualifiers returning and with COVID-19 restrictions easing, the Mountaineers anticipate their return to a normal routine and home crowds.

“There’s definitely a buzz around our program, and our student athletes looking forward to this year,” Bentley said.

The Mountaineers begin their season at the Southeast Open at Virginia Tech Nov. 7, followed by the annual Mountaineer Invitational in Boone Nov. 14.